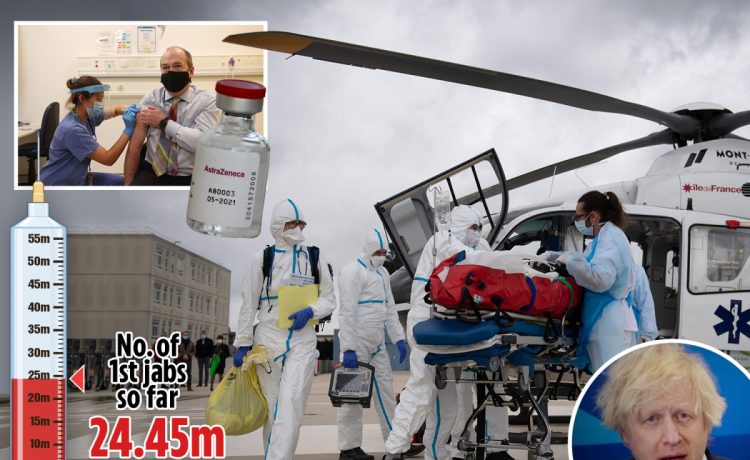 Prime Minister Boris Johnson insisted the vaccine — already given to over 11million in the UK — was both safe and effective.

And he said he could see no reason at all to stop the immunisation blitz that has successfully turned the UK’s pandemic tide.

Fourteen EU states — including France, Germany, Spain and the Netherlands — have paused roll-out as a precaution after unsubstantiated fears the jab might trigger blood clots.

It means about 7.8million doses of the life-saving Oxford/AstraZeneca jab are now sitting on the shelf despite much of Europe being on the cusp of a devastating third Covid wave.

And some of the EU is set to turn to vaccines produced by Russia and China instead.

The leading Cambridge University scientist said: “I think these pauses, I don’t think you can consider these as being cautious. They actually could be doing more harm than good.”

Both British and EU medical regulators and the World Health Organisation slapped down fears, saying there was no evidence the jab was unsafe.

Dr Phil Bryan, Vaccines Safety Lead from the UK’s Medicines and Healthcare products Regulatory Agency, said: “The evidence available does not suggest the vaccine is the cause.

“Blood clots can occur naturally and are not uncommon.

“More than 11million doses of the AZ vaccine have now been administered across the UK and the number of blood clots reported after having the vaccine is not greater than the number that would have occurred naturally.”

UK monitoring has found no evidence the Oxford shot raises risk, with rates similar found in recipients of the Pfizer jab.

About 30 blood clots were reported by 9.7million people given Oxford doses by late February.

In comparison, the figure was 38 cases among the first 10.7million Pfizer vaccines.

Asked whether he could reassure the public the Oxford jab was safe, Mr Johnson did not hesitate saying: “Yes, I can. We have one of the toughest and most experienced regulators in the world.

“They see no reason at all to discontinue the vaccination programme for either of the vaccines we’re currently using.”

His comments came as Europe’s bungled vaccine drive took another chaotic turn with more than a dozen nations suspending use of the Oxford jab — with Covid infections spiking.

The European Medicines Agency said there was no evidence for the fears and said the “benefits outweighed the risk” ahead of a review today.

Last night, a senior Whitehall source said: “You expect this disinformation from Russia and China, not our European allies.”

Europe is facing a growing Covid crisis again, with new infections across the bloc now running at an average rate of 329 cases per 100,000 people, compared with just 59 in the UK.

Britain has given 24.5million first doses, with half of all adults expected to be immunised by the end of the week.

The entire EU has managed only 49.2million, just 11 per cent of its population.

The bloc’s dire performance has also prompted top euro MP Guy Verhofstadt, an ex-Belgian PM and Brexit negotiator, to say there are “no excuses”.

But there is also anger across the continent at AstraZeneca’s “broken promises” on deliveries.

One diplomat said many member states had given up on the Anglo-Swedish company and that it was finished as a major supplier in Europe.