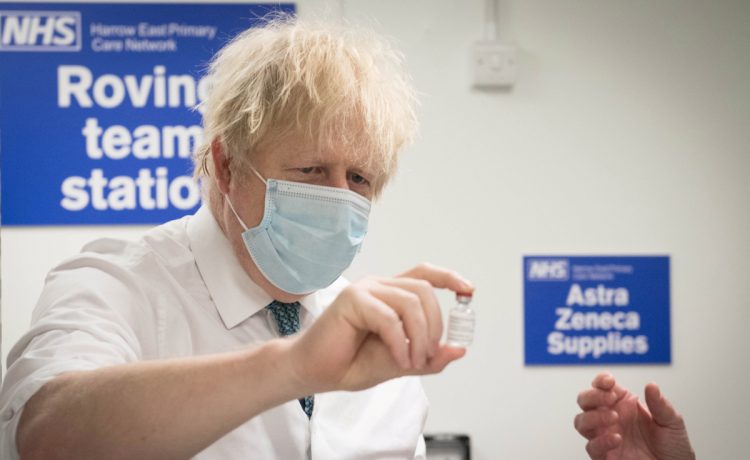 BORIS Johnson has confirmed some lockdown rules could be eased in just THREE WEEKS’ time.

The PM said he is “looking at the potential of relaxing some measures” ahead of a review of restrictions on February 15.

But when pressed he could not give a guarantee schools would be back before Easter.

The PM said the Government is “looking at the data as it comes in, looking at the rates of infection” when asked about the easing of restrictions.

Mr Johnson said the UK was on track to give the 13 million most vulnerable Brits a vaccine by February 15, adding: “But before then we’ll be looking at the potential of relaxing some measures.”

Boris made the remarks during a visit to a vaccination site at Barnet FC’s stadium in north London.

He said: “Now this massive achievement has been made of rolling out this vaccination programme, I think people want to see us making sure we don’t throw that away by having a premature relaxation and then another big surge of infection.

“We’re going to be looking at where we’ve got to on February 15. We’ll be deciding before then whether we’ll be getting schools back, but daily we’re looking at data and deciding when we’ll be looking to lift restrictions.”

Asked when schools will reopen, the PM said he can “totally understand the frustration of parents” and that learning from home is “no substitute for direct face-to-face” lessons.

He said: “Believe me, there’s nothing I want to do more than reopen schools, I’ve fought to keep schools open for as long as I possibly could.”

But he cautioned: “Schools will obviously be a priority but I don’t think anybody will want to see the restrictions lifted so quickly while the rate of infection is so very high so as to lead to a great spread of infection

“We want to see schools back as fast as possible, we want to do that in a way that is consistent with fighting the epidemic and keeping the infection rate down.”

Primary schools could be the first to return, with some education chiefs calling for a phased reopening.

The PM also said the Government is “definitely looking at” the possibility of travellers arriving in the UK being required to quarantine in hotels.

Ministers are worried arrivals could bring with them potentially vaccine-resistant strains, such as the South African variant.

He said: “We have to realise there is at least the theoretical risk of a new variant that is a vaccine-busting variant coming in, we’ve got to be able to keep that under control.”

“With this vaccination programme, we’ve done I think 6.3, 6.4 million people now in the UK as a whole.

“We are on target just, just, we’re on target to hit our ambition of vaccinating everybody in those vulnerable groups by the middle of February.”

Husband of teacher, 35, accused of sex with boy claims marriage is ‘strong’

Matt Hancock to hold a press conference at 5pm TONIGHT

Gran, 92, dies of Covid days after having vaccine as ‘jab hadn’t taken effect’

He added: “We want to make sure that we protect our population, protect this country against reinfection from abroad.

“That idea of looking at hotels is certainly one thing we’re actively now working on.

“We need a solution that gives us the maximum possible protection against reinfection from abroad.”