Queen of Paradise… or just petty? Bachelor veteran Keira Maguire shows her true colours as she lashes out at an Instagram meme account and slams a gossip website

Bachelor in Paradise ‘queen’ Keira Maguire is royally displeased by the unfavourable coverage of her time in Fiji.

After her showdown with a tearful Alisha Aitken-Radburn aired on Sunday night, Keira has been lashing out on Instagram and fiercely denying any suggestion she was acting like a bully.

The 33-year-old has become so defensive on the social media platform that she has been commenting on gossip articles and direct messaging fan accounts. 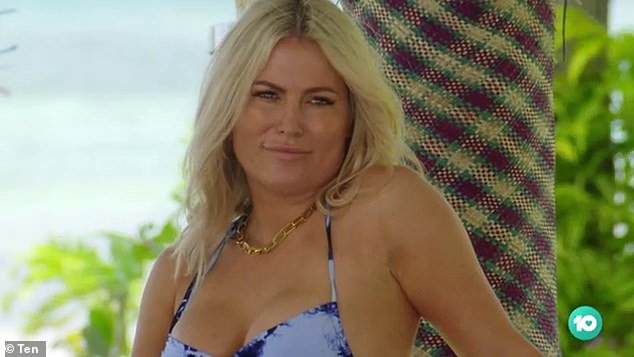 Queen of Paradise… or just petty? Bachelor veteran Keira Maguire showed her true colours this week by lashing out at an Instagram fan account and leaving salty comments on a gossip site

Keira clashed with Alisha, 27, during a fiery Bula Banquet fight that left several of their co-stars shocked and disappointed.

The two women had previously clashed on Instagram over Stories and comments Keira had posted criticising Alisha while on the 2019 season.

Those issues were again raised at Sunday’s dinner party, and although Alisha was in tears, Keira dug in her heels and accused Alisha’s friends of ganging up on her. 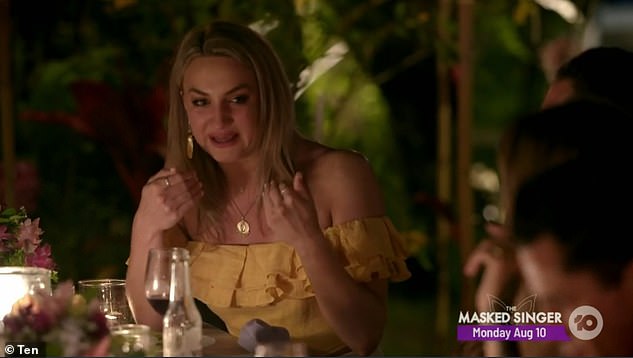 Issues: Alisha told Keira she was upset because she had ‘popped up a few stories during our last season of Bachelor In Paradise’ on Instagram. ‘Babe, you literally were like… You were doing cruel, nasty commentary,’ she said 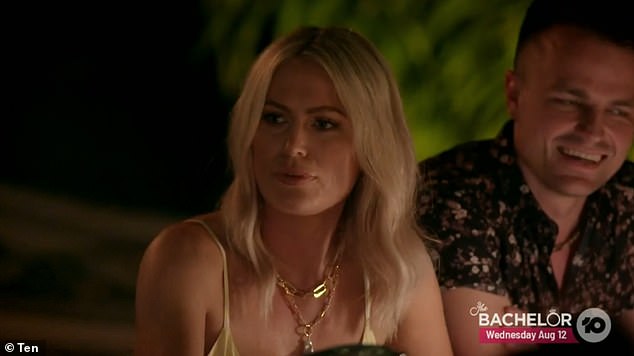 Off camera, Keira added: ‘I wish Alisha wasn’t here. I don’t know, it just annoys me so much having people question my integrity. Right now everyone’s looking at her, going, “Oh, she’s crying”. And then there’s Keira, “Oh, she’s a b***h.” But, like, I’m used to it. Whatever’

Keira broke her silence on the feud in an interview with Nova 96.9’s Fitzy & Wippa on Monday, claiming she ‘walked into a trap’ and was not responsible for the drama.

However, online publication Pedestrian.TV published her comments with a sarcastic headline insinuating they didn’t quite believe Keira.

They wrote ‘Sure: Keira denies starting last night’s BIP drama’, while encouraging their fans to click the ‘link in bio’ to decide for themselves. 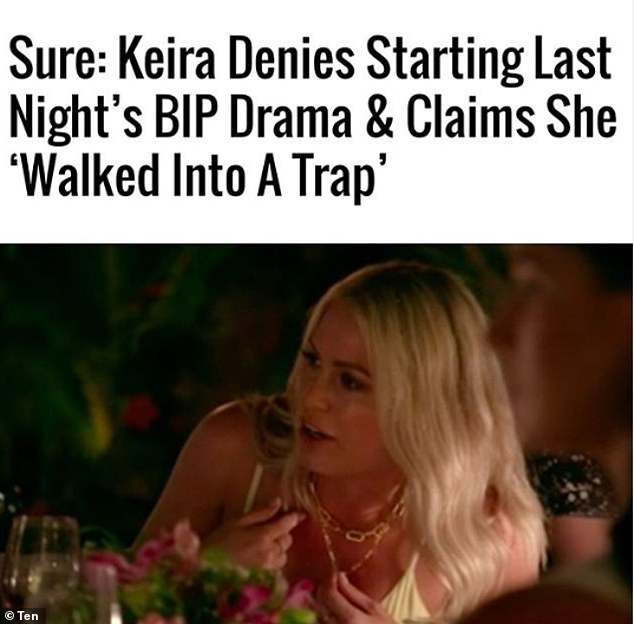 ‘It was positioned to be my reaction’: Keira’s since-deleted comments claimed the feud was ‘positioned and calculated to get a reaction’

Keira took aim at the article, writing: ‘It’s actually laughable that you think that the whole situation wasn’t positioned and calculated to get a reaction out of me.

‘Actually it wasn’t straight after that’s just what you saw. Any ways I’m not saying the way I reacted was OK. I’m saying it was positioned to be my reaction.’

The reality TV star’s comments were later deleted from the thread.

Keira also had direct messaged the popular meme account, BachieFunny, about a post that detailed her feud with Alisha, writing: ‘You’re pathetic, get a life.’ 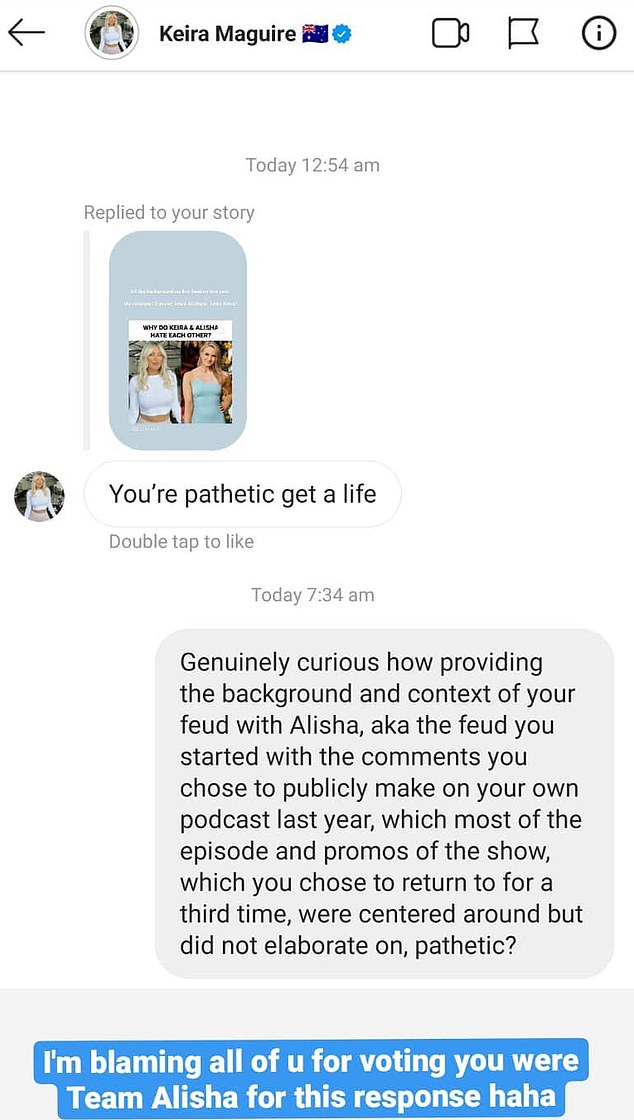 ‘You’re pathetic, get a life’: Keira was also busted direct messaging the popular meme account, BachieFunny, about a post uploaded about her and Alisha’s feud

Keira was given a rose by Alex McKay on Monday night’s episode, which resulted in her rival Jessica Brody being sent home.

There are now 16 stars left seeking love on the Fiji-based spin-off.

Bachelor In Paradise continues Tuesday from 7:30pm on Channel 10 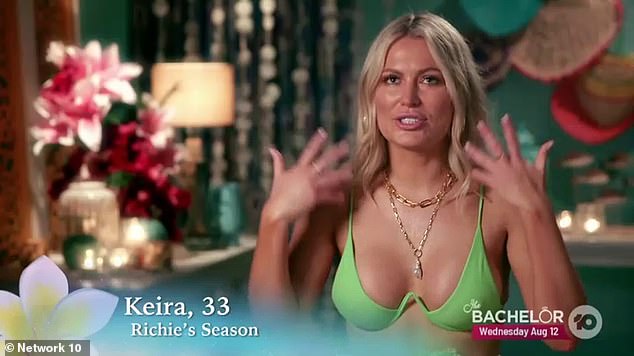 Tune in: Bachelor In Paradise continues Tuesday from 7:30pm on Channel 10

This top-rated portable speaker is now under £40