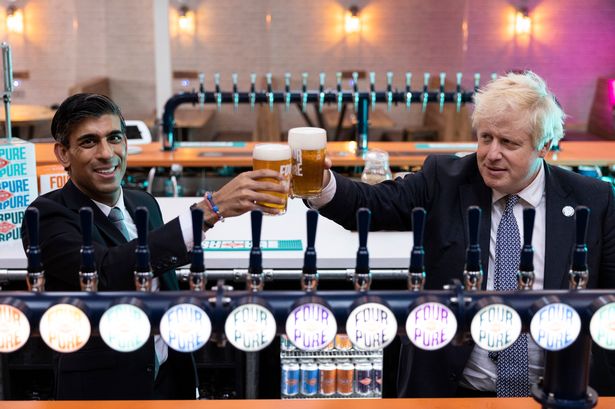 Rishi Sunak has unveiled his Budget with the usual flourish of a Chancellor with money to burn.

He claimed he’ll be pumping £150billion into the economy by 2025 as the UK recovers from the Covid pandemic.

But scratch beneath the surface and you find 4% inflation, the highest taxes since 1950 and millions on Universal Credit left behind by help.

As Paul Johnson, director of the IFS think tank, told the BBC : “Over the next four or five years I’m afraid on average we’re barely going to see any improvement in our living standards.

“And that’s after a decade of very poor increases.

“So I’m really sorry to say that actually we’re not going to be feeling much better off over the next several years.”

At least the Chancellor had room for a £1bn-a-year tax cut for bankers, though.

Here are some of the biggest nasties we found in the small print.

Winter of discontent could push inflation up to 5.4%

Rishi Sunak admitted CPI inflation, currently 3.1%, could rise as to 4%. But actually it could go a lot higher.

The Office for Budget Responsibility forecasted inflation would peak at 4.4% in 2022 – but could climb to 5.4%.

That soaring inflation means higher goods and energy bill prices in the shops.

And it could lead to the Bank of England base rate – and therefore mortgage rates – being raised in a big way for the first time in more than a decade. Mr Sunak did not rule out this grim prospect.

It throws the Chancellor’s decision not to cut VAT on energy bills – as Labour pleaded – into sharp focus.

He had thought it would present a bad image before COP – but that didn’t stop him cutting Air Passenger Duty on domestic flights.

The Universal Credit taper rate – the amount of benefit withdrawn for every pound you earn from work – will be cut from 63p to 55p by December.

This is welcomed but it will only help 1.9million out of more than 5million claimants.

The rest will not see an extra penny because the change will only help those in work.

Katie Schmuecker of the Joseph Rowntree Foundation warned those out of work “now have the lowest main rate of out-of-work support in real terms since around 1990.”

Even some of those helped will see their “winnings” wiped out by the recent £20-a-week cut.

The Resolution Foundation claimed the combination of the UC cut, taper rate and work allowance changes, and minimum wage rise will leave the poorest fifth of households £280 a year worse off on average.

The tax burden will reach its highest level in over seventy years – despite Tory claims of being a low-tax party.

It said: “Together with the £31.5 billion in corporate and personal tax increases announced in the March 2021 Budget, and the improved underlying fiscal outlook, these measures raise the tax burden from 33.5% of GDP before the pandemic to 36.2% of GDP by 2026-27, its highest since the early 1950s.

“Taking his March and October Budgets together, the Chancellor has raised taxes by more this year than in any single year since Norman Lamont and Ken Clarke’s two 1993 Budgets in the aftermath of Black Wednesday.”

Taxes are rising to their highest level since 1950

The Treasury is assuming council tax will rise by by 3% a year over the next three years. But the Budget leaves wriggle room for it to shoot much higher.

The small print admits the final rises councils can impose will only be confirmed later, by Michael Gove ’s Department for Levelling Up, Housing and Communities.

And the OBR warns they could go high. The watchdog says it “expects” net council tax receipts to keep rising by 6% a year for years to come.

Sam Chapman-Allen, Chair of the District Councils Network warned the £4.8bn of grants Mr Sunak announced will not “come close to addressing the financial pressures”, and they face cutting services or hiking tax.

Rishi Sunak’s promise to cut duties on pints of beer and cider in the pub comes with a sting in its tail – as it won’t apply to smaller breweries.

The Chancellor announced a new “draught relief” for drinks served in 40 litre containers.

But furious brewers said it wouldn’t apply to many craft beer producers who sell their products in 30 litre kegs.

The Campaign for Pubs said it was “completely wrong” and “massively unfair to small brewers/cider producers and also pubs serving pins (36 pints) & bag in box cider/perry.”

James Calder, SIBA Chief Executive said: “Whilst hugely beneficial for producers of Real Ale, which is sold in forty litre casks, most craft keg beer in the UK is sold in thirty litre kegs, meaning they cannot benefit. By amending this lower threshold to twenty litres the Treasury can ensure all independent breweries benefit from this welcome new duty relief on draught beer.”

Banks have been handed a £1bn-a-year tax cut

Banks have been handed a £1bn a year tax cut in the Budget.

The bank surcharge – a levy on profits, over and above corporation tax – will be cut from 8% to 3%.

Rishi Sunak insisted that because corporation tax is, separately, rising, banks will pay an overall corporate tax rate of 28% in 2023 compared to 27% now.

But Shadow chancellor Rachel Reeves said: “As he hits working people with the highest sustained tax burden in peacetime, he’s giving a tax cut to bankers who like to take short-haul flights while sipping Champagne.”

Lib Dem leader Ed Davey claimed overall, the Budget will give twice as much away in tax cuts to bankers as extra catch-up funding for children.

Disposable incomes for families are expected to barely grow over the next five years, according to figures hidden away in the Budget documents.

The respected Institute for Fiscal Studies (IFS) highlighted how the cash families have left over to spend would grow by just 0.8% per year over the next five years – well below the historical average.

The IFS added: “A median earner will find their pre-tax pay just about outpaces inflation, but after the extra income tax and NICs due their take-home pay will fall by about 1%, or £180 per year, in real terms.”

The small print also reveals a stealth raid on self-employed people meaning they will pay an extra £1.715 billion over the next five years.

It comes from a change to the basis periods on which income tax is calculated.

Exports to the EU have fallen by 10% since Brexit

Exports to the EU have fallen by 10% since trading rules changed in January 2021 following Britain’s exit from the bloc.

The Office for Budget Responsibility also found that imports from the EU to the UK have fallen by 15%.

But, with trading rules for Northern Ireland suspended amid the so-called sausage wars with Brussels, economists with the independent group fear the two metrics could fall further still.

The OBR’s analysis of Mr Sunak’s Budget says: “We expect the full impact of Brexit on trade to be manifest only after all the terms of the TCA have been fully implemented and businesses have had time to adjust fully to the change in trading conditions, including reorganising their supply chains.”

Much-trumpeted freeports will fail to boost the UK economy overall, the Office for Budget Responsibility said, amid concerns they could deprive us of taxes.

Boris Johnson and Rishi Sunak had talked up the tax-free zones – to be based at East Midlands Airport, Felixstowe and Harwich, Humber region, Liverpool City Region, Plymouth, Solent, Thames, Teesside – as a “benefit of Brexit” to voters in the so-called Red Wall.

But the OBR’s document says that “given historical and international evidence, we have assumed that the main effect of the freeports will be to alter the location rather than the volume of economic activity”.

Autumn Budget 2021 summary: Key highlights of announcement at a glance

Road tax looks set to go up on cars and vans, despite Mr Sunak’s boast

The Chancellor made a big show of freezing vehicle excise duty on HGVs, but he did not mention cars or vans.

The small print of Budget documents contains an assumption that these duties will rise by the standard RPI inflation – currently a whopping 4.9%.

The Institute for Fiscal Studies think tank has shown just how long the Covid shadow is.

It warns: “44% of the cash increases announced in today’s Spending Review for the next three years will go to the Department of Health and Social Care. The equivalent figure last year was 45%.

“This explains why despite relatively big increases in headline measures of spending, things might still feel tight in other areas.”

Rishi Sunak scrapped the triple lock on pensions to avoid them rising by 8% in a statistical anomaly.

Now the Budget documents show just how much that anomaly would have cost – more than £5bn a year.

The vast cost of the fuel duty freeze

The 12th year in a row of the fuel duty freeze will no doubt be welcomed by motorists, who are facing record prices at the pumps.

But it’s causing disquiet among environmental campaigners who have seen billions of pounds stay in the pockets of motorists, that could be spent on green infrastructure.

The figure – which doesn’t include the cumulative impact of all the other years of freezes – gives a snapshot into just how expensive this vote-winning policy is.

The Treasury distributed a helpful fact sheet to reporters, with 48 examples of how taxes will go up or down on specific beverages.

Truly a blow to the masses.