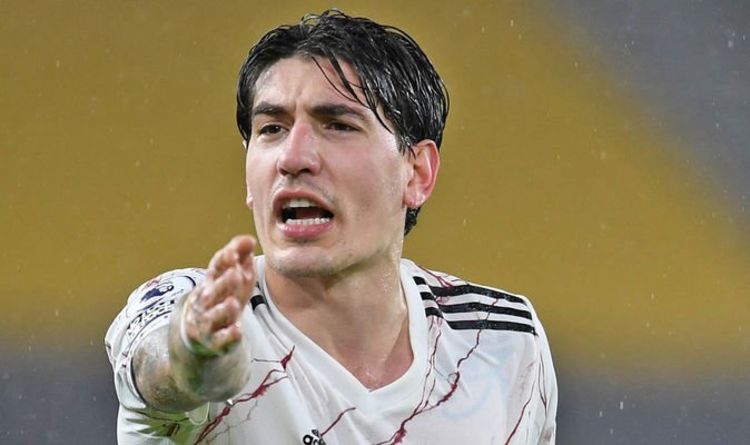 Arsenal star Hector Bellerin has aimed a dig at referee Craig Pawson after his side’s 2-1 defeat to Wolves on Tuesday night. The Gunners took the lead at Molineux. However, they saw David Luiz and Bernd Leno dismissed as they instead slipped to a disappointing defeat.

Arsenal took the lead against Wolves through Nicolas Pepe.

The Ivory Coast international, who has started to improve in recent weeks, got on the scoresheet for the second time in three matches.

However, the Gunners’ evening was transformed when Luiz received his marching orders.

The Brazil international was dismissed for a foul on Willian Jose, with referee Pawson then sending him off a result – much to the anger of the Arsenal players.

Leno then also saw red after Joao Moutinho’s wonder strike, with the Portugal international finding the net at home for the first time in his career.

“We’ve shown that when we’re 11 against 11 on that pitch, it’s completely different.

“We had complete control in the first half and we probably should have been 2-0 up by the end of it. We paid for those mistakes.

“I always say that teams are not beating us, we are losing against ourselves. It’s for us to learn. Hopefully this will be the last time. We were on such a good run, great momentum, great confidence in the team.

“We just need to forget this step because situations like this are not going to happen very often. We’ll go on to the next one.”

“Sat here, I would say yes, let’s go straight away,” Arteta said when quizzed on the incident.

“But we have to speak with legal and the club and make the decision what the best thing to do is.

“I don’t want to think that [the decision was made on David Luiz’s reputation].

“I’m sure they made the decision based on seeing something. I was expecting to see something but didn’t see anything.

“It was a big decision. If the officials got it right, and can justify they got it right, I will put my hand up and apologise. But I didn’t see any contact and that is really frustrating because it was a big moment in the game.

“The way we lost the game is where it really hurts, it’s painful, but I have to take the positives.

“We didn’t concede any chances but Moutinho scored a ‘worldie’ and it’s 2-1. Bernd comes out and hits the ball with his hand, it’s a clear red card and we’re down to nine players and it’s almost impossible to win.”