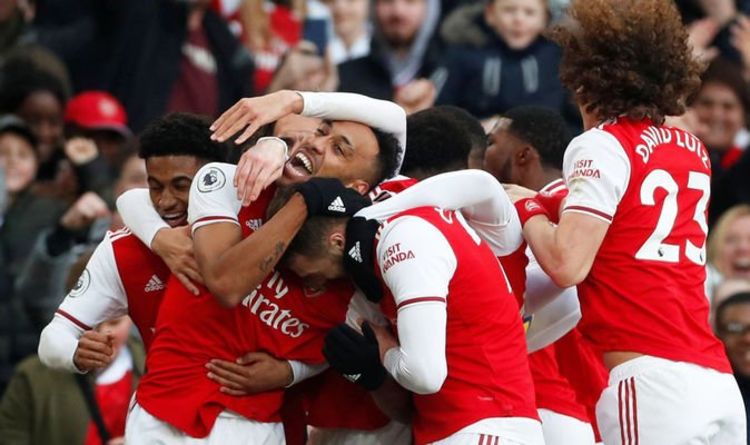 Frank Lampard kept faith with a 3-4-3 formation for Chelsea’s Premier League trip to Arsenal, though Christian Pulisic missed out due to a hamstring issue.

Mateo Kovacic started in place of Jorginho and Mason Mount stepped up with Callum Hudson-Odoi dropping to the bench.

31: Bookings! Mason Mount goes in the book for a late lunge on Ainsley Maitland-Niles. N’Golo Kante follows him shortly after (60 seconds I believe) for a nasty one on Lucas Torreira. Frustration setting in for the visitors.

28: Alexandre Lacazette whips in a cross from the left but it just eludes the touch of Pierre-Emerick Aubameyang. Arsenal looking surprisingly comfortable here. Chelsea offering absolutely nothing going forward. Nothing. Nil. Zero. Zilch.

25: I’m contractually obligated to inform you that Alfredo Morelos has been sent off AGAIN in the Old Firm derby. Death, taxes and a Morelos dismissal. Rangers won the match by the way, 2-1. First league win at Celtic in a decade.

22: Two pieces of terrible news for Arsenal. Calum Chambers is down injured and it looks serious as the stretcher comes on. The centre-back won’t be able to continue but can hobble himself off the field. Shkodran Mustafi replaces him…

19: Arsenal fans want a penalty and it’s not a bad shout either as Alexandre Lacazette appears to have his heels clipped. Referee Craig Pawson has a look before turning away.

Moments later Reiss Nelson scampers away down the right channel and crosses into Pierre-Emerick Aubameyang. The forward cushions it over to Lacazette, but N’Golo Kante arrives from nowhere to block the effort.

16: Since his Premier League debut in February 2018, Pierre-Emerick Aubameyang has scored more goals in the competition (45) than any other player, one more than both Jamie Vardy and Mohamed Salah (44).

15: Can Arsenal maintain this speed and intensity? That’s the big question because they have bossed this in the opening 15 minutes. Also, Chelsea have lost all six of the games in which they have conceded first this season.

13: Arsenal’s rapid start is rewarded with a goal at the Emirates!

Pierre-Emerick Aubameyang reacts quickest to Calum Chambers’ flick-on and heads the ball past Kepa Arrizabalaga. Not too much emotion from Mikel Arteta but he’ll be jumping inside. Awful defending from Frank Lampard’s side.

12: Just so stupid from Matteo Guendouzi, who flies in on Willian in the corner. No reason for it with the Brazilian heading away from goal. Anyway, Willian plays it short to Mason Mount, who tests Bernd Leno with a first-time strike. Leno stills the first and gathers the rebound.

10: Fikayo Tomori can’t be far away from a booking now having committed his third foul of the afternoon. He blocks the run of Mesut Ozil and that gifts Arsenal a free-kick around 25-yards from goal. Can you guess who’s going to take it? Yup, David Luiz.

The former Chelsea defender, who hasn’t scored direct from a set-piece in about two years, leathers one straight at Kepa Arrizabalaga.

7: Arsenal continue to start the match with real authority as Reiss Nelson again strides down that right channel with purpose. He wins the corner and David Luiz arrives to unleash an improvised bicycle kick. Yes, you read that correctly.

5: Danger! Fikayo Tomori is forced to chop down Reiss Nelson, who had broken free down the right channel. Mesut Ozil takes change of the free-kick but Chelsea easily knock it away.

3: Nice pressing from Arsenal in these early stages. The Gunners are playing a high line and have already forced Chelsea into a couple of wayward passes. I remember seeing this against Bournemouth on Boxing Day – but the killer touch in the final third was missing.

1: And we’re underway on Mikel Arteta’s home debut as Arsenal manager. His playing home debut arrived on September 10 in a 1–0 home win against Swansea. No parallels there but I wrote it down earlier and was desperate to use it at some point.

Sidney: I think Reiss Nelson is starting over Nicolas Pepe because Ainsley Maitland-Niles is being used as an inverted full back (extra midfielder). This makes whoever is playing RW, work harder to cover… It’s all about balance… hopefully, Nelson uses his brain today.

Sidharth: So you saying Nicolas Pepe has more managers this season than the number of goals he has scored?!

I still can’t get my head around this Nicolas Pepe snub. That’s now three managers in six weeks refusing the select  Pepe in their starting XI’s.

Don’t get me wrong, I like that 20-year-old Reiss Nelson is getting his chance to impress but ahead of a club-record £72million signing?

What are these managers seeing that we’re not?!

Arsenal have never lost a Premier League home game against Chelsea when they’ve scored the first goal, winning 11 and drawing four out of 15.

Frank Lampard expects to have to make “countless more” tough decisions at Chelsea like the choice to let David Luiz join Arsenal in the summer.

Brazil defender Luiz had only signed a new two-year Chelsea deal at the back-end of last term, but new Blues boss Lampard still allowed him to move to London rivals Arsenal.

“There will always be decisions; if you look at our defenders and the emergence of Tomori, that’s obviously been a big plus for us,” said Lampard. “It was just a decision that was made, and while I’m here I’ll be making countless more of those in different ways. So that’s what it is.

“And I certainly wish David well, when he left this club, where he was part of the Champions League winning team, played with half a hamstring in the final, I know that. He got himself fit when he was under pressure with the injury and I would always respect that.”

Mikel Arteta is convinced Nicolas Pepe can overcome his underwhelming start at Arsenal to develop into a world-class talent.

Arteta has also left Pepe on the bench again…

The Spaniard also opted to give the 24-year-old just eight minutes of action as a substitute during his maiden match as Gunners head coach in the 1-1 Boxing Day draw at Bournemouth.

“I think it was obviously a big change for him to come here from France,” said Arteta. “As well, he found a team that in that moment wasn’t performing at their best, probably the environment for him to settle wasn’t ideal.

Michael: I much prefer Granit Xhaka in the midfield alongside Lucas Torreira. Our squad lacks depth and it’s no surprise where we are at. If Xhaka goes we will miss him.

Dan: That Chelsea team looks set up to contain; can see Arsenal having a large amount of possession. If they score early, it could be a tough afternoon for Frank Lampard.

Oja: If Mikel Arteta was English I would say he’s favouring his country boy over Nicolas Pepe but he’s not and I have no idea what Reiss Nelson adds to this team even on the bench, pure waste of space, we’re better off playing with a red card that’s how clueless Nelson is when it comes to football.

Snap! Frank Lampard also makes TWO changes to his squad after their Boxing Day defeat to Southampton at Stamford Bridge.

Winger Callum Hudson-Odoi and midfielder Jorginho are dropped to the bench with Mateo Kovacic and England midfielder Mason Mount recalled to the starting XI.

There’s also a place on the bench for 19-year-old defender Tariq Lamptey, who is described as a ‘diminutive, fast and tenacious player’ on Chelsea’s website.

Mikel Arteta makes TWO changes from the side that drew 1-1 with Bournemouth at the Vitality Stadium. What a forgettable afternoon that was…

Calum Chambers, who was suspended for the last game, returns while French midfielder Matteo Guendouzi is also back in the starting XI.

Sokratis Papastathopoulos and everyone’s favourite Switzerland midfielder Granit Xhaka are not involved in the 18 and that gives teenage forward Tyreece John-Jules a place among the substitutes.

Not sure if you’re interested (or care at all) but the 423rd Old Firm of the season is underway at Celtic Park. Lots of challenges flying in and most of those are on resident hot-head Alfredo Morelos. He’s managed to stay calm for 32 minutes – which is an achievement in itself.

Celtic have also just missed a penalty. For LIVE coverage of that you can click here to join my former friend (I jest) and colleague Adam Powers.

And the team news and line ups arrive. The headline news is that Christian Pulisic has been dropped completely while Mesut Ozil starts once again. Full analysis coming shortly.

Sorry, just busy admiring all the Mikel Arteta merchandise around the stadium this afternoon.

I read that there were no Carlo Ancelotti scarves around Goodison Park on Boxing Day because of the Christmas holidays – but clearly the vendors are back with a bang in north London today.

Scarves, full-size cardboard cut-outs, key rings and hats have all been adorned with the Spaniard’s tremendous hairline. Selling like hot cakes. Hotcake with Arteta’s face are, unfortunately, not available…

So the Manuel Pellegrini experiment has failed at West Ham.

With the Hammers a point above the drop zone and facing a crunch match with fellow strugglers Bournemouth on New Year’s Day, joint-chairmen David Sullivan and David Gold swung the axe.

Pellegrini’s expensively assembled side started the season in fine form, but a run of two wins from 14 matches – and four straight home defeats – saw them tumble from fourth to 17th in the space of three months.

And with 13 wins out his last 65 Premier League games – why wouldn’t you return to man, myth, legend David Moyes to bail you out of trouble!

Hello everyone and welcome to our LIVE coverage of Arsenal vs Chelsea from the Emirates Stadium.

Are you ready to bid an emotional farewell to the 2010s? We have the final three fixtures of the decade this afternoon.

A decade that began with Chelsea winning the Premier League title and Arsenal finishing 12 points ahead of seventh-placed Liverpool.

Birmingham, Blackburn, Stoke and Fulham actually finished mid-table in 2009/2010. How things have changed…

Anyway, this trip down memory lane is making sad because I was young, hopeful and still had all my hair 10 years ago. I don’t know why I started the blog on such a downer. My apologies.

Mikel Arteta could make a number of changes to Arsenal’s starting XI when Chelsea visit the Emirates.

Four first-team players are facing a race to be fit in time to feature in Arteta’s first home match since taking charge of the Gunners. Hector Bellerin, Gabriel Martinelli and Rob Holding are all set to be assessed prior to kick-off against the Blues.

Meanwhile Dani Ceballos has returned to training and is also in contention to feature but Kieran Tierney remains sidelined after dislocating his shoulder.

Frank Lampard has deployed a five-man defence in the past two matches but may return to a 4-2-3-1 formation which proved successful earlier in the campaign.

One of Antonio Rudiger, Kurt Zouma and Fikayo Tomori will therefore drop to the bench while Lampard also has a selection headache in the full-back roles.

Marcos Alonso is also pushing for a return to the starting XI and will hope to get the nod over Emerson Palmieri on the left side of defence.