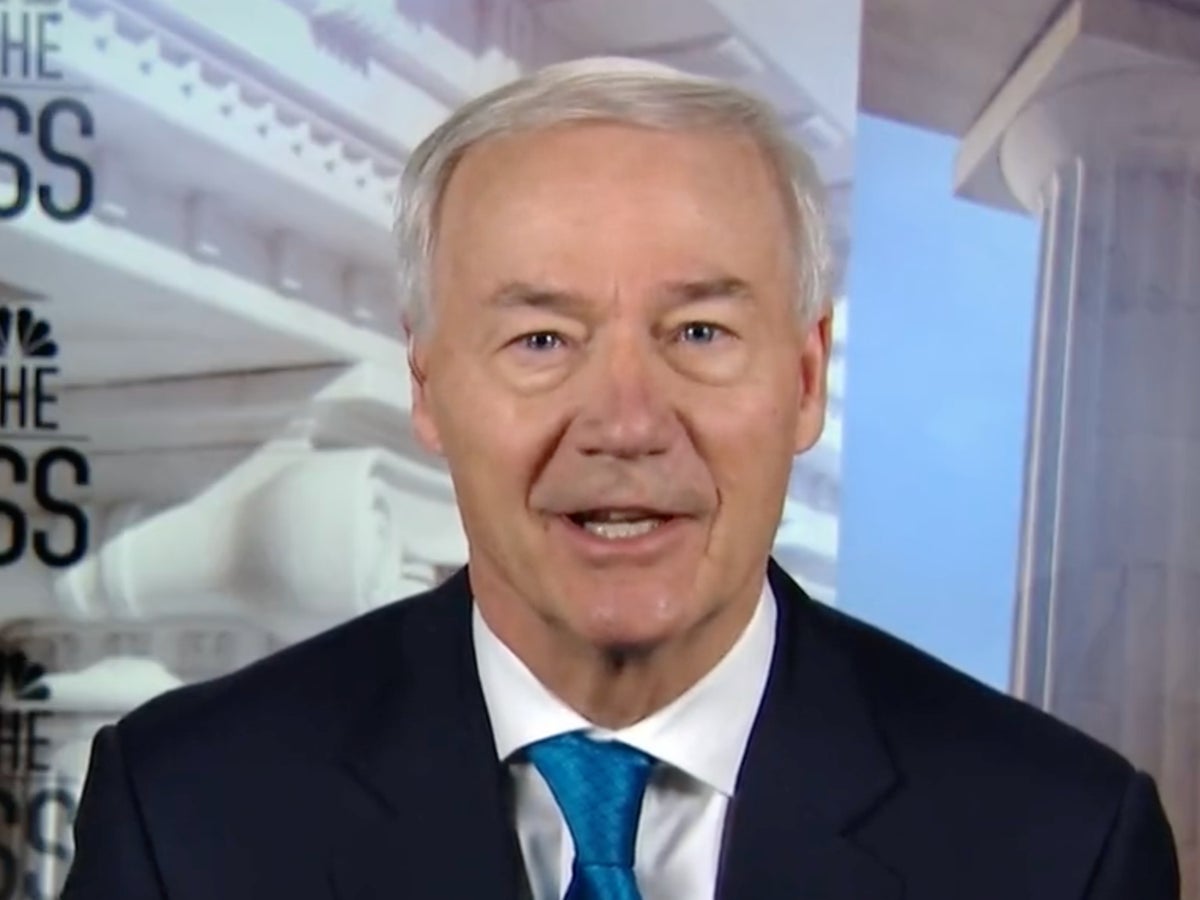 Arkansas Governor Asa Hutchinson defended his state’s controversial law that makes all abortions illegal in all cases except to save the life of the patient in a medical emergency on NBC’s Meet the Press on Sunday morning.

Asked by host Chuck Todd whether he is comfortable if a “13 year old in Arkansas is raped by a relative, that 13 year old cannot get an abortion,” the governor said he would “prefer a different outcome than that.”

“That’s not the debate today in Arkansas. It might be in the future,” he said, adding that the law currently bans abortions with only one exception.

Shortly after the US Supreme Court overturned the constitutional right to an abortion, officials in more than a dozen states moved to enact so-called “trigger” laws outlawing abortion care.

On 24 June, hours after the Supreme Court revoked the precedent from 1973’s Roe v Wade affirming constitutional protections for abortion access, Arkansas Attorney General Leslie Rutledge implemented the state’s 2019 law that makes all abortions illegal except to save the life of the patient. It does not include exemptions for pregnancies from rape or incest.

Democratic US Rep Alexandria Ocasio-Cortez, speaking on the programme after Mr Hutchinson, said “what’s really important is honing in on this idea that the governor, the Republican party, and frankly the Republican legislature, cares about the life of a woman and the life of a mother.”

The state has the third-highest maternal mortality rate in the US, according to the US Centers for Disease Control and Prevention. Most of those women are Black.

Twenty-six per cent of children in the state live in poverty, according to the United States Department of Agriculture.

“Forcing women to carry pregnancies against their will, will kill them,” she said.

During a signing ceremony alongside the state’s attorney general in Little Rock on Friday, the governor said the Supreme Court “returned the issue of abortion to the states.”

“Since Roe v Wade was decided, the states that desired to protect unborn life had been prohibited from doing so,” he said.

Anyone convicted of performing or attempting to provide abortion care in Arkansas could be sentenced to up to 10 years in prison with $100,000 fines.

When asked whether the state will investigate miscarriages, which often require similar treatment, the governor told Meet the Press that the state will have oversight over abortion clinics “to make sure they follow the law.”

“When you’re talking about miscarriages – the exception is, of course when the life of the mother, or there’s a medical health emergency – and that’s between the physician. They’re going to make those judgments and how to handle those things,” Governor Hutchinson said.

“So this is between the doctor and the woman, then?” Mr Todd asked.

“Doctors have always made life and health and death decisions – that’s what they’re trained to do. They have to make those medical judgments. It’s not the state’s judgment to reconfigure those,” the governor responded.

“I believe every life is precious,” she told CBS Face the Nation on Sunday. “I just never believed that having a tragedy or a tragic situation happen to someone is a reason to have another tragedy occur.”

She pointed to what she called the media’s “fear tactics” that are “scaring women” by highlighting the far-reaching health consequences of ending legal abortion care.

Arkansas and South Dakota are among 13 states with “trigger” laws on the books designed to take effect without overarching constitutional protections for the right to an abortion.

In the hours after the Supreme Court’s decision, “trigger” laws also became active in Kentucky, Oklahoma, Louisiana, Missouri and Utah.

“Trigger” laws in Idaho, Texas and Tennessee are expected to take effect within 30 days of the decision, and laws in Mississippi, North Dakota and Wyoming are pending. Most do not include exceptions for rape and incest.

Several states that passed unconstitutional abortion laws blocked by the courts are expected to challenge those rulings and swiftly implement their restrictions. Republican governors are also asking their state legislatures to pass more restrictive laws now that Roe has been struck down.

Meanwhile, more than a dozen states and Washington DC have laws that protect abortion rights, including explicit protections in state constitutions or laws allowing for abortion up to a certain point in pregnancy or throughout pregnancy.