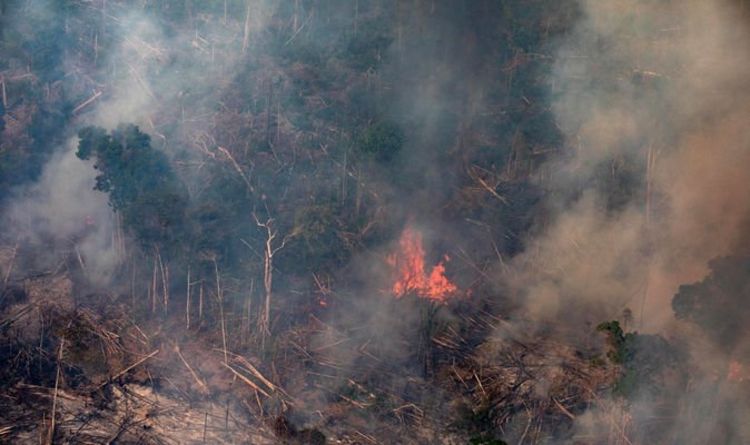 A disturbing animated map released by US space agency NASA has revealed the shocking surge of carbon monoxide (CO) pumping into the atmosphere as a consequence of fires ravaging the Amazon rainforest. Carbon monoxide levels detected up to 3.4 miles (5.5km) high in the atmosphere have suddenly risen to 160 parts per billion by volume and local values are expected to be “significantly higher”. The poisonous gas can persist in the atmosphere for month, with dire implications both for air quality and climate change.

However, strong winds could swiftly change that for some regions.

NASA said in a statement: “A pollutant that can travel large distances, carbon monoxide can persist in the atmosphere for about a month.

“At the high altitude mapped in these images, the gas has little effect on the air we breathe; however, strong winds can carry it downward to where it can significantly impact air quality.

“Carbon monoxide plays a role in both air pollution and climate change.”

NASA created each “day” in the animation by averaging three days’ worth of measurements, a technique used to eliminate data gaps.

Green indicates concentrations of carbon monoxide at approximately 100 parts per billion by volume (ppbv); yellow, at about 120ppbv; and dark red, at about 160ppbv.

READ MORE: How to help the Amazon rainforest as Brazil burns

The latest fires have now been ravaging the Amazon for three weeks, triggering anti-government protests and international anger.

The dramatic NASA photos show the increase in smoke and fire activity as flames break out in Rondonia, Mato Grosso and Amazonas.

More than half of the fires are in the massive Amazon Basin, home to 20 million people.

An estimated 1,663 new fires were started between Thursday and Friday, according to Brazil’s National Institute for Space Research.

Environmental organisations and researchers believe most of the Amazon fires were likely started by humans who want to clear the land for commercial gain.

Christian Poirier, the Amazon Watch’s program director, said: “The unprecedented fires ravaging the Amazon are an international tragedy and a dangerous contribution to climate chaos.”

He said the flames were “directly related” to Brazil’s President Jair Bolsonaro.