Breast cancer patients can now undergo a mastectomy and nipple-preserving breast reconstruction in one procedure.

Sophie Williams, 42, a marketing consultant from South-West London, had it done, as she tells CAROL DAVIS. 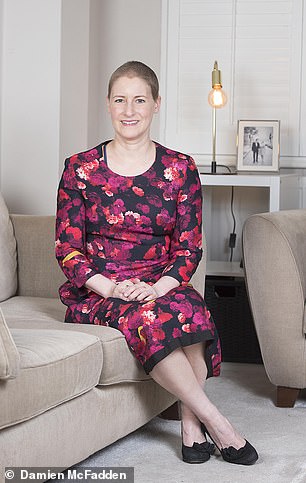 Sophie Williams, 42, a marketing consultant from South-West London had the all-in-one operation

Turning over in bed one February morning this year, my left breast felt uncomfortable — I checked, and felt a lump.

While I usually check my breasts regularly, I’d been busy, and hadn’t done so for a few months.

I saw my GP a couple of days later, and she referred me for a mammogram, which I had a week later. On examination, the consultant said it was likely to be a tumour — I was scared, but determined to fight it.

The following week, after an ultrasound and biopsy, I was told I had a 3.5cm tumour in my left side. I was prepared for this the week before, so I think my husband [Goran, 42, a magazine editor] was more shocked than me.

I didn’t want any delays, so I used my private health insurance through work to get transferred to a private hospital, where I had more detailed blood tests and scans, as well as a BRCA test, which checks for genetic causes — there were none.

The doctors said it was a triple negative breast cancer, meaning it would not respond to hormone drugs, and I would need a mastectomy.

I wanted to avoid the limitations of wearing a prosthesis after my breast was removed — I’m young, and the gym is a big part of my life, and I thought it would get in the way — so I saw a plastic surgeon to talk though reconstruction options.

An implant would mean surgery every ten years to replace it, or I could have a reconstruction using my own body tissue — but this would mean two ops, to remove the tumour and breast tissue, then to reconstruct the breast six months later, once I’d fully recovered. Both options also involved the loss of my nipple.

I told the surgeon I wanted to avoid going through more than one op if I could.

She explained that they could do a two-in-one operation, where a breast cancer surgeon would remove the tumour and then she, the plastic surgeon, would reconstruct the breast using tissue from my abdomen.

All this would be done through an incision of less than 10cm under my breast — it would leave a hidden scar and preserve my nipple. 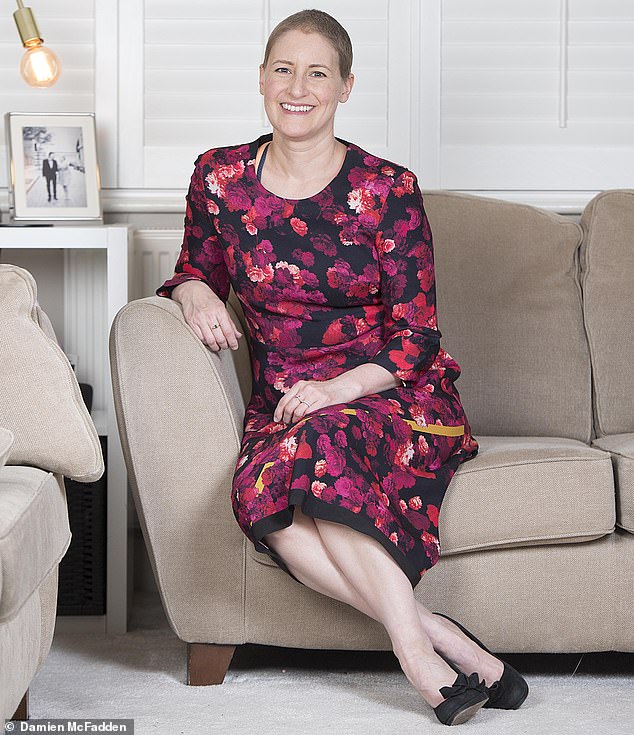 Breast cancer patients can now undergo a mastectomy and nipple-preserving breast reconstruction in one procedure. Pictured: Sophie Williams who had the operation

So, instead of being lopsided and trying to conceal a prosthesis, or having the worry of repeat surgeries, I’d have a breast shaped from my own tissue, which would be carefully sized to match my right breast and would gain or lose weight if I did. It sounded great.

First, I had 16 rounds of chemotherapy over six months to shrink the tumour — I felt tired and lost my hair, but was well enough to work. The tumour had shrunk to 1.5cm by August and I had surgery six weeks later.

After the eight-hour operation, I had morphine for 24 hours, then switched to paracetamol and ibuprofen. I stayed in hospital for a week while they monitored the blood supply to my new breast tissue.

Lab tests afterwards showed the cancer had gone, and I will have regular mammograms to make sure this remains the case. After coming home, Goran took me on gentle walks at first; I was well enough to drive and went back to work after six weeks.

We’re planning to draw a line under 2019 and all my treatment with a wonderful Christmas, then a beach holiday in Thailand and Malaysia in January, where I can wear a bikini with confidence.

Victoria Rose is a consultant plastic and reconstructive surgeon at Guy’s and St Thomas’ NHS Foundation Trust and DRG Plastic Surgery clinic, both in London.

Around one in eight women gets breast cancer, and around a third need a mastectomy, total removal of the breast. About 30 per cent of women having a mastectomy have a reconstruction.

Mastectomy has traditionally meant removing the nipple and breast tissue via a scar straight across the breast — and, while a nipple can be tattooed on later, losing it is hard for many patients to cope with.

WHAT ARE THE RISKS?

‘Taking tissue from elsewhere in the body means there are two surgical sites, and using an abdominal site can cause a weakness,’ says Grainne Bourke, a consultant plastic surgeon at Leeds Teaching Hospitals NHS Trust and Spire Leeds Hospital.

‘but this is an excellent technique using the patient’s own tissue, and, without the risks of using foreign material, is generally successful.’

We can reconstruct a breast using an implant, but this can mean more operations later as the other breast changes and leaves the body asymmetrical.

There is also a very rare risk of breast cancer associated with certain types of implant — around one in 33,000.

We also offer a deep inferior epigastric perforator (DIEP) flap, where we take tissue from the abdomen to create a breast that changes as a patient ages or gains weight and gives good symmetry.

Studies have now shown, though, that in carefully selected patients, keeping the nipple is not risky — we send nipple tissue to the lab during surgery to be examined for any breast cancer cells and call patients back to theatre if any are found.

As a result, the National Institute for Health and Care Excellence has approved nipple-sparing mastectomy for appropriate patients, and we can offer a nipple-sparing, skin-preserving reconstruction at the same time, through an incision in the crease under the breast where it is naturally hidden, using the DIEP flap from the abdomen, reducing time under anaesthetic and recovery.

This is very exciting and is suitable in cases where the original tumour is at least 3cm from the nipple.

Just a few surgeons are doing this, as it is technically harder to work through a smaller incision, though we are publishing a paper to show we have had no problems with damaging breast skin, damaging the nipple, or not getting the tumour out entirely — and that, psychologically, it is far better for patients to retain their nipple and go through surgery just once.

The operation takes six to eight hours under general anaesthetic. The surgeon makes up to a 10cm incision under the breast to perform the mastectomy, and removes the sentinel lymph node, the first a cancer would travel to, for testing to check the cancer has not spread.

I then make an incision from hip to hip, hidden in the bikini line.

I work through the small incision the breast cancer surgeon has made, shaping the re-sited tissue in the breast to create good symmetry and fixing it in place with dissolvable stitches.

I insert a probe at the join, so I can keep checking the blood supply is healthy — the probe is removed after several days once we are confident the new blood supply has established itself.

Are advent calendars a gift to your health?

Nothing beats the Christmas cheer of an advent calendar, and these options let you treat yourself without going overboard . . . 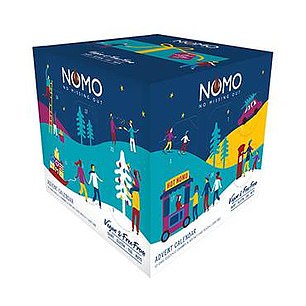 NOMO: The chocolate here is free from dairy

Good for those with allergies, the chocolate here is free from dairy, gluten, eggs and nuts.

This provides 24 different flavours of tea. Warming wild apple and cinnamon is a particularly festive blend, while the antioxidants in the green tea may combat over-indulgence.

For those who prefer their chocolate with a punch. The chocolate here is vegan and made with single-origin Ecuadorian cacao, which is full of intense flavour. There is also a similar vegetarian version.

For a sweet treat that is marginally more virtuous than chocolate, this calendar offers a small bag of popcorn every day. Flavours include cheese, and raspberry with dark chocolate. 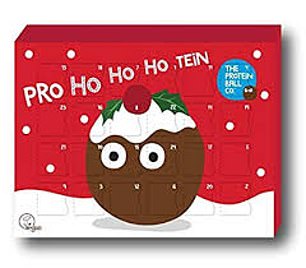 PROTEIN BALL: There is a protein ball behind each window of this calendar

There is a protein ball behind each window of this calendar, with flavours including peanut butter. They each contain from 5g to 10g protein, have no added sugar, and are free from soy, wheat and gluten.

Love liquorice? This is for you, as each window hides two liquorice pieces with a different flavour. The liquorice — made from gluten-free rice flour — provides iron that can boost energy levels.

There’s lots to love about the health benefits of coffee: every cup contains high levels of antioxidants, which help protect our cells from damage. Here, you get two sachets of flavoured coffee every day — and each is only two calories a cup. 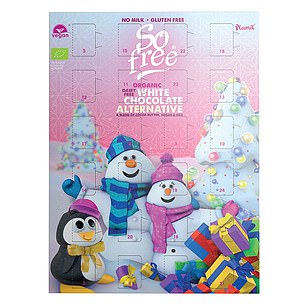 Filled with 25 full-size, plant-based treats, from bars to nut butters and cookies — all high in protein. It includes products from popular brands such as Bounce and Pulsin.

This one contains a dairy-free white chocolate alternative made in a factory that never uses dairy or gluten. The treats are made from a blend of cocoa butter, sugar and rice.