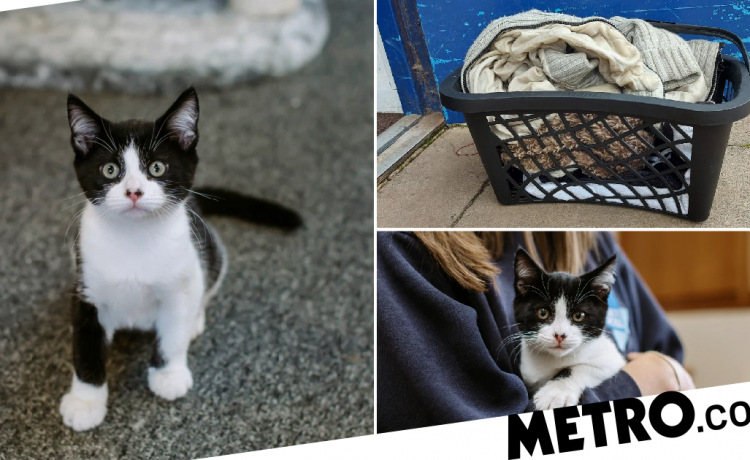 A three-month-old kitten who was put in an old laundry basket and dumped in the middle of the street has found a new and loving home.

The kitten was found by a passerby, who contacted a branch of animal welfare charity Blue Cross after first checking in with homes in the neighbourhood to see if anyone was missing him.

Sarah Miller, animal welfare assistant at Blue Cross Hertfordshire, said: ‘Within the space of 30 minutes, a colleague and I got into the car and went and collected the kitten from the lady’s home.

‘When we got back to the office, we scanned the kitten to see if he had a microchip, and looked on local social media pages to see if there was any mention of lost kittens.

‘But there were no recent posts, and sadly he did not have a microchip.’

Thankfully, a vet check found that the kitten was healthy, and the team there decided to call the little guy Eddie.

Centre Manager Kellie Brooks offered to take Eddie home to give and foster him while he waited to be adopted.

‘Eddie was in good condition, very friendly with people and loved to play so we don’t think he’d been homeless for long,’ said Sarah.

‘Once he was in foster with Kellie, his personality started to shine through – he was very adventurous and into everything.

‘He needed to find a home where he could be given lots of time and stimulation.’

After just a couple of weeks, Eddie was able to do just that and found a forever home.

Sarah added: ‘We couldn’t be happier to see Eddie in his new home.

‘It’s really wonderful to see him settling in so well.

READ  Rescue dog steals everyone’s hearts at Crufts by being absolutely rubbish
Share on FacebookShare on TwitterShare on PinterestShare on Reddit
newsgrooveFebruary 20, 2021