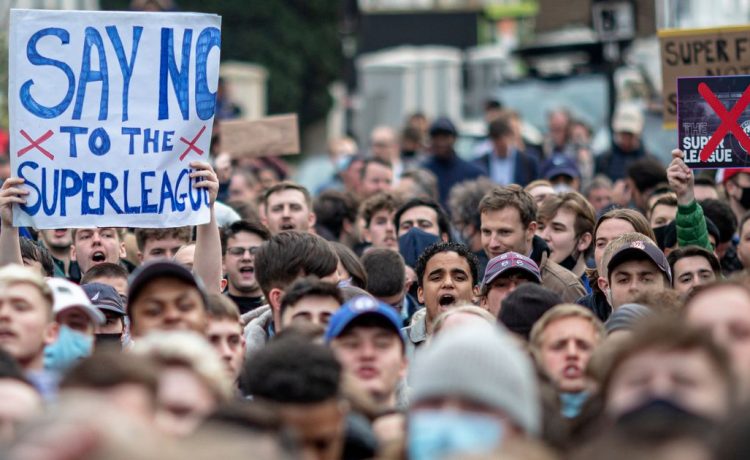 Plans for the Big Six English football clubs to join a European Super League lie in tatters after all six pulled out last night.

Bosses responded to a massive backlash from fans, politicians and footballers themselves over the “elite” breakaway plot.

It came hours after Boris Johnson threatened a “bomb” of new laws to stop the “cartel”, and last night he said it was “the right result”.

But ministers today say it’s “not the end” and they are now considering what reforms may be needed to the way the sport is run.

Sport Minister Tracey Crouch will still lead a fan-led review, which was promised in the 2019 Tory manifesto and set up this week.

But there are still some ideas the government is looking at. Here is what’s believed to be on the table.

The review led by former Sports Minister Tracey Crouch will look at whether supporters could have a role in owning clubs.

One big focus is the ‘German model’ in which fans own at least 51% of shares and voting rights in their club. This is being examined “very closely” by ministers.

READ  Andrzej Krauze on the elections in Ukraine

Mr Dowden said the fact German clubs were not part of the Super League “rather makes the case” for the German model.

“We need to look at options for fans to be able to have stakes in clubs,” he told broadcasters today, adding: “It’s very important that we don’t see this as the end of the process.”

He told LBC: “I do think it’s right that we look at how fans can have a stake in the game. I think if you go back a few years and certainly this is one of the things we discussed with fans, fans did have more of a stake a few years back, over time they’ve been bought out so I think that’s important that we look at that.”

Ministers are also understood to be looking at a “golden share” model as a possible alternative to Germany’s scheme.

A golden share is a share of less than 50%, but which gives the holder powers of veto over major changes to a company.

So if supporters’ groups were to have a golden share in their club, they could block unsavoury changes in ownership for example.

A government insider told the Mirror measures will have to “show boards can be forced to listen to fans”.

An Ofcom-style regulator for football is being considered, Culture Secretary Oliver Dowden said.

The Government has not ruled out the prospect of a new regulatory body, he confirmed, telling LBC: “The fan-led review will look at this.”

“Clearly we have got to get a balance. I want the Government to do as little as it has to do. The game is rightly self-governed, but I do think it is right that we look at governance questions like that, and that will not be off the table.”

READ  Brexit timeline: What is next for Parliament as Brexit deadline approaches? - Key dates

Things to improve the ‘fan experience’

The review will also look at a “fan experience” around football.

This is likely to be more about the “daily frustrations” which fans face – for instance when going to away matches.

While the measures on the table are vague at the moment, it’s understood they could include laying on extra trains for example to get people home.

Mr Dowden had said he was looking at toughening up or enforcing competition law against the Super League.

But a government insider suggested that, while still possible, this was more a reaction to the European plans.

It seems less likely that it would be deployed to shake up football in and of itself.

… And no cap on players’ wages

Oliver Dowden rejected a salary cap, telling LBC: “I’m not putting that in the scope of the review. I think it’s right that it’s up to clubs to determine players’ wages.”