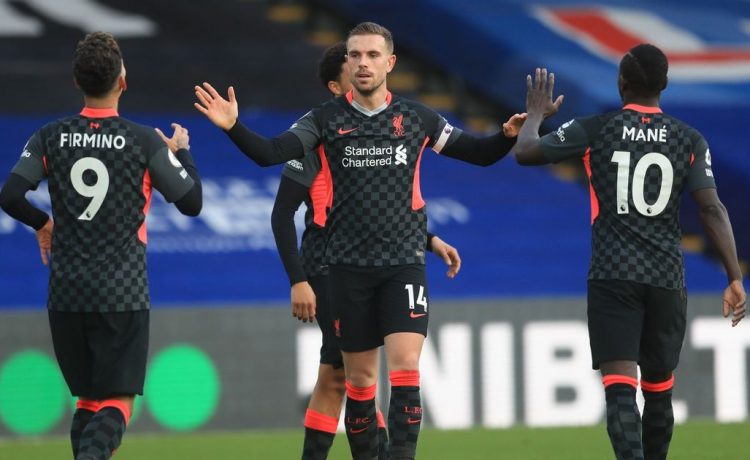 Liverpool battered Crystal Palace to send an ominous message of their title intent at Selhurst Park.

The Reds took the lead after just the third minute when Takumi Minamino fired home after being found by Sadio Mane, but Palace looked to hit back and had a couple of decent chances to level.

However, Liverpool took control towards the end of the first period and struck through Mane and Roberto Firmino, before the visitors ran riot in the second half.

Jordan Henderson blasted home from the edge of the box to make it 4-0, before Mohamed Salah came off the bench to tee up Firmino for the fifth before grabbing two himself.

Here are the game’s talking points.

After rolling out one of those teamsheets in which the attention was drawn to who wasn’t on it rather than who was, Klopp was almost instantly rewarded by Minamino’s first Premier League goal.

A year to the day since signing for the Reds, and having seen Diogo Jota come into the team and instantly click, it hasn’t been the easiest of introductions into English football for the Japanese attacker.

Like it or not, Minamino will always be judged on his first Anfield appearance, which came in the colours of Red Bull Salzburg as he absolutely dazzled against the Reds in the Champions League last October.

Liverpool fans long to see that player, and while a shift around of his positions means that that level of performance has always been difficult to reproduce, his importance as a valuable squad player is now apparent.

His goal should do him the world of good.

A few weeks ago if you’d have said that the absence of Christian Benteke was harmful to Palace’s productivity at the top end of the pitch then you’d probably have got funny looks.

But the suspended former Liverpool forward did appear to be missed during the spell between Liverpool’s first two first-half goals, when the lack of a focal point impacted both Wilfried Zaha and Jordan Ayew.

Both looked to be craving another figure up there, and someone to occupy defenders as they tried to wriggle clear of the visiting defenders.

There were a number of occasions where Palace could have profited if only more men were committed forward.

3. Forwards are firing, and fiery

While their defence has been decimated, Liverpool’s tried and tested forwards are still there and are still firing.

All have scored in the past week as well, and that more than anything is likely to be the decisive factor if indeed they do go on and reclaim their crown.

The quality of finish on show at Selhurst was simply staggering, as their goal difference took a welcome upswing.

4. A title marker laid down

You got the sense that the good feeling that rolled on from the last gasp victory over Tottenham in midweek just rolled on into this game, and the sense that Liverpool have put down a real title marker is a very real one.

Six points clear at full-time, and although that gap is sure to be closed at some stage over the weekend, the reigning champions will be the side who are at the top of the tree at Christmas.

They have been beset by issues throughout the campaign, but things are starting to look a little ominous for those who hoped that these setbacks would knock Liverpool off course.

They look in the mood to defend a title.

5. Time to lay an old cliche to rest?

Memories of a certain evening in May 2014 were being trotted out again before this fixture, but surely it is time to put ‘Crystanbul’ – and whole notion that this is a difficult fixture for Liverpool – to bed?

Sure, the Reds lost 3-1 on their very next trip to South London later in 2014, but this was their seventh straight victory there since then, and one that was achieved after going 3-0 up, no less.

Selhurst Park has become one of their favourite trips.