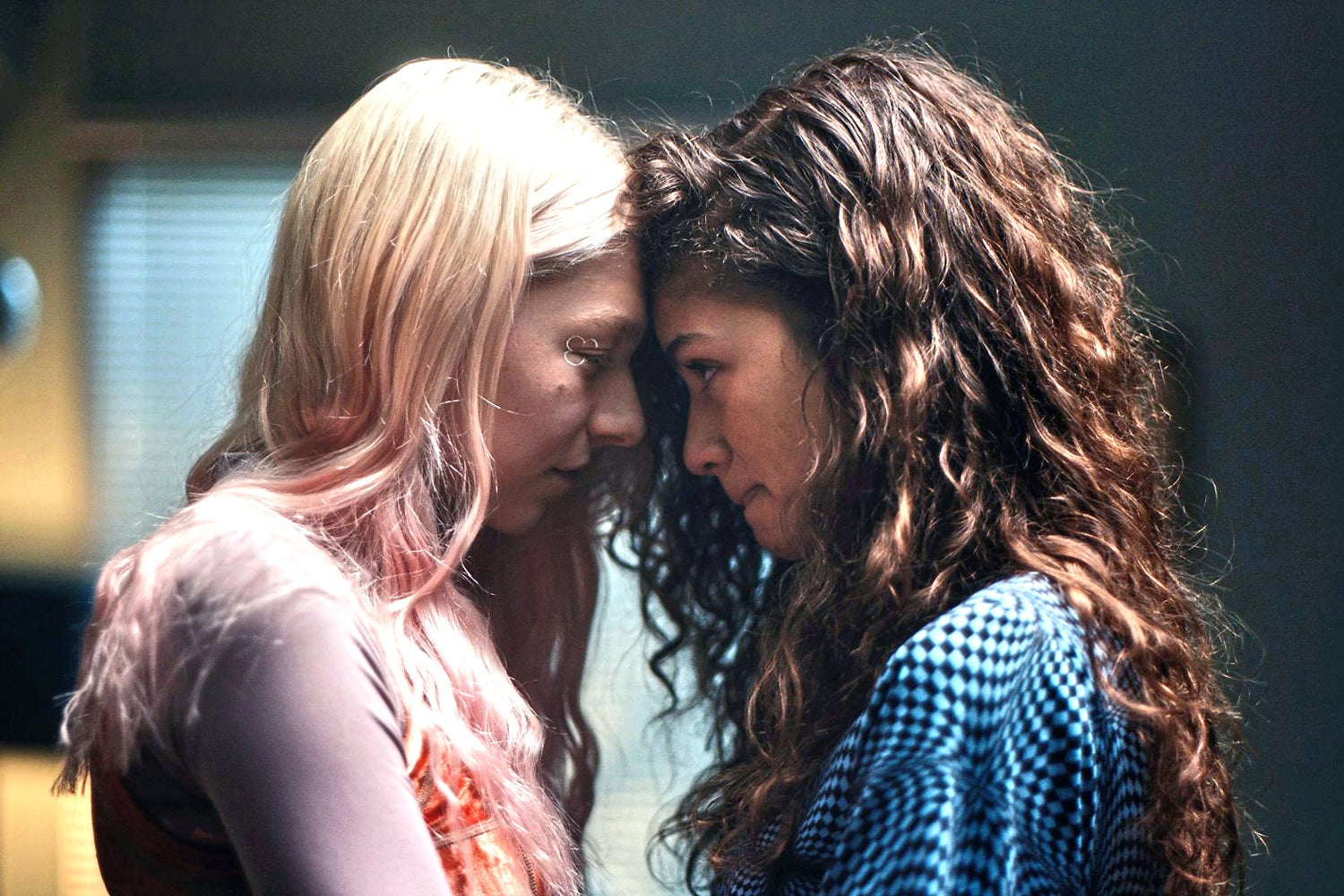 Meet Zendaya. Or maybe you’ve already met. The 22-year-old from Oakland, California, has been loved by tweens since her Disney Channel days, after which she nabbed the role of Peter Parker’s friend MJ in Marvel’s massive Spider-Man franchise.

It’s Zendaya’s latest incarnation, however, that’s set to finally fulfil the megastar promise of her mononym.

She plays Rue, the rehabbing and relapsing narrator of HBO’s controversial new teen drama Euphoria (on Sky Atlantic/NowTV from August 6), which counts Drake as an executive producer.

As well as letting us into her own internal monologue, Rue introduces us to her equally troubled high-school peers, all of whom exist in an anxiety-inducing chaos of social media, relentless pornography and inadequate parenting.

Among them are Jules, a young trans woman (played by trans activist Hunter Schafer); Nate (Jacob Elordi), a jock with anger issues; and the ruthlessly slut-shamed Cassie (Sydney Sweeney). Man, it’s tough to be a teen in 2019 but at least now Generation Z (for Zendaya?) has found a worthy champion.

In the opening moments of Euphoria, Rue tells us she was born “three days after 9/11”. Zendaya can’t claim quite the same historical synchronicity but as the mixed-race daughter of two teachers, raised in a historical centre of black activism and living through a Trump presidency, how could she not be engaged? In Instagram posts and awards show acceptance speeches, Zendaya has earned a reputation for combining social conscience with charisma on a range of topics. Seizing the attention of smartphone addicts is, in itself, no mean feat but Zendaya also knows what to do with our attention once she has it: “I am inspired right now by people who use their platforms,” she told Glamour magazine in 2017. “If people know your name, they should know it for a reason.”

Zendaya’s name is not only known but also respected by those coming up behind her, including 16-year-old A Wrinkle In Time star Storm Reid, who plays Rue’s younger sister in Euphoria, and 19-year-old activist-actor Yara Shahidi from Black-ish. “There’s a misconception in this industry that everybody who looks like you, or may at first seem like you, must be your competition,” Shahidi told Glamour. “What I so deeply respect about Zendaya is that she’s actively helping to dismantle that myth.”

The similarly outspoken Solange, Viola Davis and Ava DuVernay also have Zendaya’s back. They came out in support when Giuliana Rancic, host of E!’s Fashion Police, criticised the dreadlocks Zendaya wore on the 2015 Oscars red carpet, saying, “I feel like she smells like patchouli oil … and weed.” Rihanna posted Zendaya’s 2017 Met Gala look with the caption “brown goddess”, and even Leonardo DiCaprio has recently outed himself as a fan: “I just saw Euphoria,” he told reporters on the red carpet at the LA premiere of new film Once Upon A Time In Hollywood. “That show is amazing.”

Clearly, DiCaprio’s TV taste is as ageless as his babyface but he happens to be right about Euphoria. Like all the teen drama classics — My So Called Life, Kids, The Breakfast Club or Skins — it centres on a protagonist who’s at once archly knowing and heartbreakingly vulnerable. Zendaya brings those qualities to Rue but in her off-screen life she exhibits a much healthier sense of self-worth, while also celebrating the diverse beauty of her fans via the intermittently trending hashtag #SelfiesforZendaya and, of course, The Greatest Showman soundtrack (she played the trapeze artist).

If Euphoria’s characters are anything to go by, that’s a message teens sorely need to hear — and although self-confidence can’t stop the social media haters entirely, who cares? As Zendaya has put it: “There’s something to be said for the fact that literally everybody can hate my outfit, but if I feel good in it I’m the only one that should matter.”

Speaking of serving lewks, Zendaya’s personal style has evolved from a long-term collaboration with stylist Law Roach (his other big client is Céline Dion; go figure). Together they’ve created such fashion moments as “Mulleted Bowie” at the 2016 Grammys and a Met Gala Joan of Arc tribute. The “fashion icon” tag might feel premature but Zendaya has already made the cover of Vogue twice, been named among Net-A-Porter’s best dressed of 2018, put out her own line (all gender neutral, naturally) and collaborated with Tommy Hilfiger this year. It includes a Seventies-inspired zodiac print which Euphoria’s Jules would absolutely slay.

Do we share too much online? Euphoria includes Rue’s impassioned take: “It’s 2019 and unless you’re Amish, nudes are the currency of love!” but Zendaya’s own Instagram is a reassuringly PG-rated mix of sun-kissed selfies and behind-the-scenes goofing for her 59.6 million followers. On her blog, zendaya.com, she shares everything from her thoughts on documentaries  to messy top-knot tutorials.

Everything, that is, except details on her love life. It’s been rumoured (and denied) that she and Spider-Man star Tom Holland are an item but let’s hope she’s still got space in the iCal for Timothée Chalamet, her future co-star in Denis Villeneuve’s Dune remake.

You booze, you lose

Some reassurance, at last, for any panicked parent watching Euphoria: all those wild  parties where everyone  gets high and starts humping? They’re actually based on the adolescent experiences of the show’s 34-year-old creator, Sam Levinson, not necessarily its younger stars.

In fact, Zendaya doesn’t drink alcohol, as affirmed with a 21st-birthday blog: “This industry is way too nuts for me to not be in control of myself and my decisions, so I just don’t want to introduce drinking!”

That Marvel contract proves Zendaya is already well in with the biggest entertainment brand in the world but she’s never been overawed. Aged just 16, she met Disney Channel bigwigs to demand a producer credit on the star vehicle they’d offered her, then titled “Super Awesome Katy”. She also requested that both the “wack” title and her character’s name be changed (“Do I look like a Katy to you?”) which they duly were, resulting in three hit series of K.C. Undercover.

Next up, she’ll star in A White Lie, a historical drama about a mixed-race woman who passed as white to gain entry to one of 19th-century America’s most prestigious universities. It’s a personally selected passion project, which she’s producing alongside Reese Witherspoon, herself a former teen star.

And beyond that, the woman with one name and many talents fancies herself as a Donald Glover. “He’s given himself permission to do whatever,” she told Vogue. “And whatever he does, he goes deep, you know?” Sounds about right.

HBO’s Euphoria is available on August 6, exclusively to Sky Atlantic and Now TV