Patricia Bright has admitted she felt ‘under pressure’ to get cosmetic surgery as she speaks out about being honest online.

The YouTube star, who boasts a following of more than two million, has built her huge audience through her beauty, lifestyle, and family vlogs and it’s clear that honesty is always the best policy with her.

And one thing she’s always been open about is her experience with cosmetic surgery.

‘I’m not ashamed to say I’ve not been afraid of the surgeon’s table, have I done it because I felt under pressure? Probably,’ Patricia explained to Metro.co.uk.

‘And then I’ve said that to people. Have I done that because it’s made me feel a little bit better about myself? Yeah, and it has.’

She acknowledged that cosmetic surgery isn’t a ‘magic bullet’ that will solve all insecurities, adding: ‘When I talk about it, I’m not here to glamorise…there are some risks definitely associated with doing it.’

And being so honest online is something that she extends to motherhood, after she gave birth to her daughter Grace back in 2016 and recently revealed that she’s expecting her second child by dropping a stunning photo shoot.

‘I feel the best when I’m being really honest. I try to do it in a way that feels the most natural to me – I don’t force too many honest moments for attention,’ the 32-year-old pointed out.

It’s no secret that many mums who share their lives online receive a whole bunch of unsolicited advice – something Patricia’s no stranger to, as she admitted she’s ‘100%’ dealt with that pressure.

‘Especially because there’s this judgement of how mums should be,’ she said. ‘I travel a lot so sometimes I get comments of “You’re not at home again, who’s with your daughter?”

‘There’s times where I have to sit back and not worry about what someone has to say,’ she explained, before laughing: ‘You can never make people on the internet happy! ‘

However, being honest doesn’t equate to sharing every part of your life, and Patricia values keeping a lot of her family life private.

When she revealed her current pregnancy to fans, she was already about 23 weeks along.

‘I waited until I was 23/24 weeks. This is my second baby, and I just enjoy that private part by myself in the very beginning versus making a big hoo-ha about it,’ she explained.

‘People are pregnant on the internet for a very, very long time! I wanted to do something a bit more glamorous, a photo shoot, to do the announcement.’

Clearly incredibly excited about the new arrival to her family, Patricia revealed that’s she’s most hyped for Grace to have a sibling. So sweet!

Chatting about what it means to her, she explained: ‘I talk about health, beauty, things that make you look a lot better on the outside, so when they approached me I thought this was a really good way to approach appearance and feeling good, but from another perspective.

‘I don’t think it’s something that’s talked about much amongst my demographic but it’s still an issue that impacts them.

‘I thought it was a cool way to understand the impact of smoking but in a way that is reflected for my community.’

Patricia is working with Change Incorporated for their Quit Cigarettes initiative, find out more here.

MORE: People are cancelling YouTuber Tana Mongeau for wearing a snake to VMAs 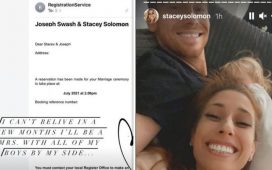