Young woman, 25, reveals the terrifying moment she was diagnosed with skin cancer


A young woman has spoken about the terrifying moment she was diagnosed with skin cancer despite wearing sunscreen and practicing sun safety.

Kelsie Dummètt, from Brisbane, was diagnosed with melanoma in July after a biopsy on a freckle on her right breast.

The 25-year-old, who has also battled an incurable autoimmune disease since she was 17, said the news came as a total shock.

‘To be completely honest I am absolutely terrified and the last few months has been torturous,’ she said.

To this day physicians are unsure how both the autoimmune disease and melanoma cancer came to occur, leaving Kelsie feeling helpless and ‘scared’ for her life.

Since the age of 19, Kelsie has had 10 surgeries, three of which were completed in a  day earlier this year. 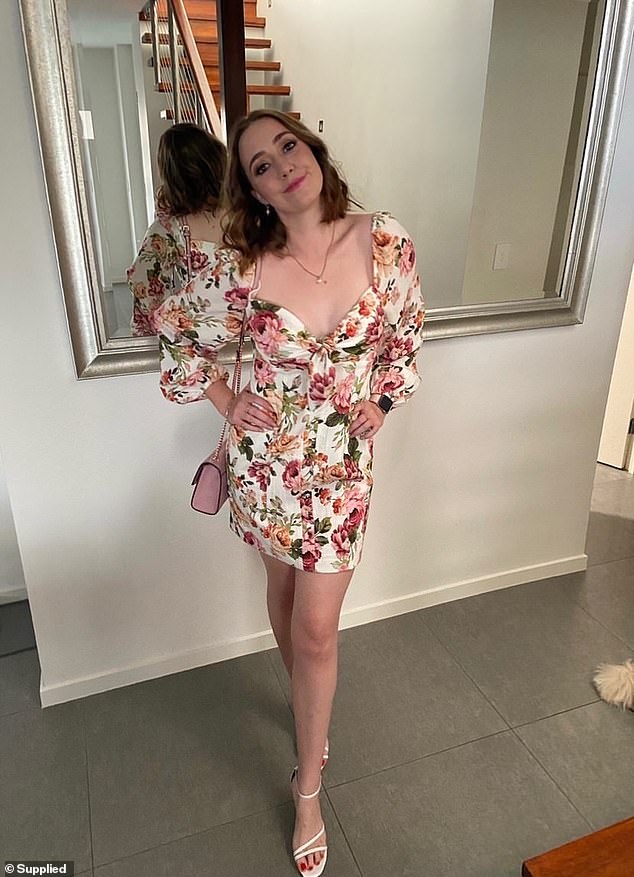 Kelsie Dummètt, from Brisbane, was diagnosed earlier this year on July 9, 2021 after doctors found a melanoma cancer in a sinister freckle on her right breast 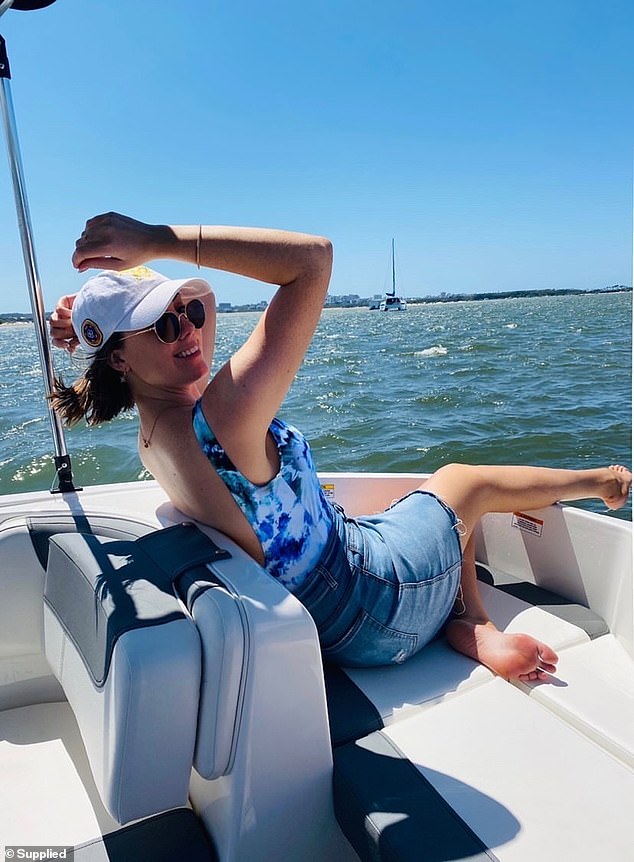 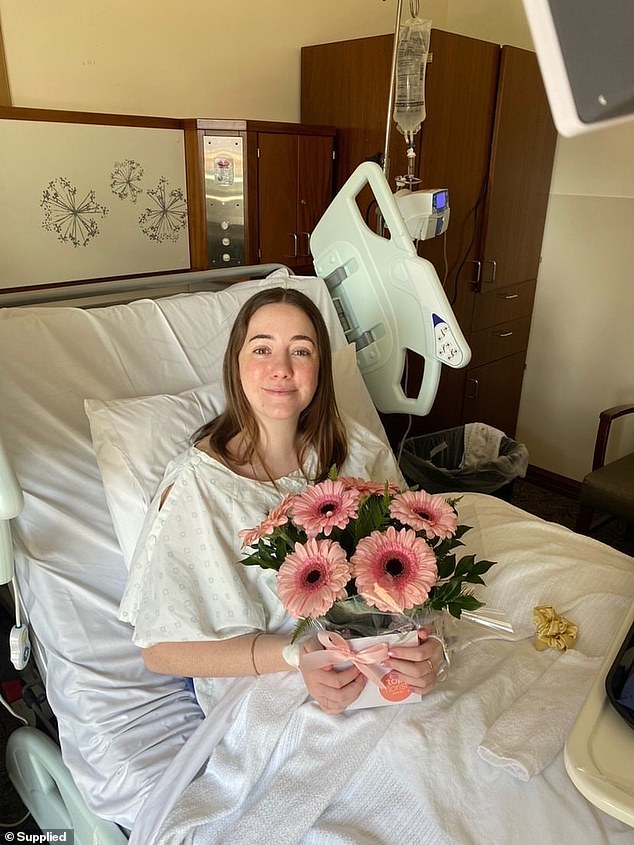 To this day physicians are unsure how both the autoimmune disease and melanoma cancer came to occur, leaving Kelsie feeling helpless and ‘scared’ for her life

Kelsie said she experienced symptoms of pain in her right breast, fatigue, constantly feeling sick and unwell, but didn’t notice any change to her skin where the cancer was found.

Her mum previously had skin cancer and her dad had multiple sclerosis (MS), though doctors are unsure if this is the reason she was diagnosed with the diseases.

Due to her medical history, it is likely (but not certain) the skin cancer wasn’t caused by UV radiation.

‘I think it’s really important to understand that melanoma skin cancer isn’t always due to the sun, it can simply be cancer of the skin and doesn’t always come with a physical sign,’ Kelsie said.

Throughout her journey, Kelsie has met other people with melanoma who never had had a visual ‘warning sign’ and doctors have since told her it can affect any part of the body, including the lungs and brain. 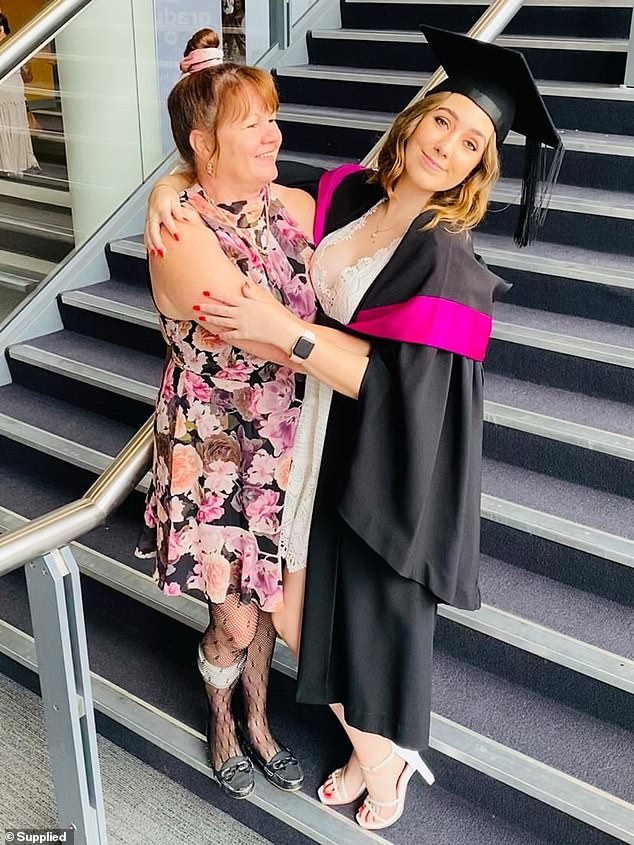 Kelsie said she experienced symptoms of pain in her right breast, fatigue, constantly feeling sick and unwell, pain across her lymph nodes on her breast and across her stomach but didn’t notice any change to her skin where the cancer was found

What is autoimmune disease and what common symptoms?

The immune system normally guards against germs like bacteria and viruses. When it senses these foreign invaders, it sends out an army of fighter cells to attack them

Normally, the immune system can tell the difference between foreign cells and your own cells

In an autoimmune disease, the immune system mistakes part of your body, like your joints or skin, as foreign

From the ages of 17 to 20 Kelsie was incredibly unwell and went through two and a half years of taking medication and getting tests done, placing an immense amount of stress on her body. 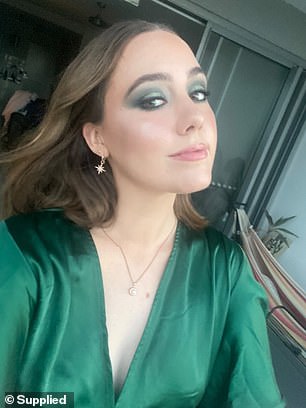 Due to Kelsie’s medical history, it is likely (but not certain) the skin cancer wasn’t caused by UV radiation

She was diagnosed with severe autoimmune disease in her final year of high school after attempting to donate blood at Red Cross and the volunteer noticed her red blood cells were ‘so low’, which prompted her to visit a doctor.

Earlier this year, Kelsie started feeling unwell again and had bouts of tonsillitis that became so irritable she got sepsis, which later had to be removed due to inflamed, infected polyps and benign tumours in her throat.

At the same time, doctors were going through a ‘process of elimination’ to determine why Kelsie was struck with illness once again.

‘I was so sick I started vomiting, had internal bleeding, couldn’t eat any food, had no energy or appetite and severe joint pain,’ she said.

While going to see several different doctors and specialists to get different tests done, Kelsie suggested doing a full body skin check because she was due to get one and watched a video online about another woman’s cancer story.

‘I was prompted to suggest a skin check to my doctors after watching Courtney Mangan’s Instagram story as she is currently battling stage four melanoma cancer,’ she said.

The helpful suggestion led to the detection of the small mole-like freckle on her right breast where she couldn’t view herself.

The skin findings were also in conjunction with MRI, CT and ultrasound scans where anomalies were found.

Kelsie then went to see a skin and melanoma specialise who completed six biopsies over two days, which Kelsie described as ‘intense’.

‘Four days later I got the call and the doctor told me I had cancer,’ she said, but it wasn’t until several weeks later that the cancer was determined to be melanoma.

‘At first I didn’t realise how serious it was but the doctor said it’s a ‘common misconception’ as melanoma is one of the ‘most aggressive forms of cancer’ because it can occur anywhere in the body where the skin is.

‘It was baffling to me because the area where the cancer was found never saw sun.’ 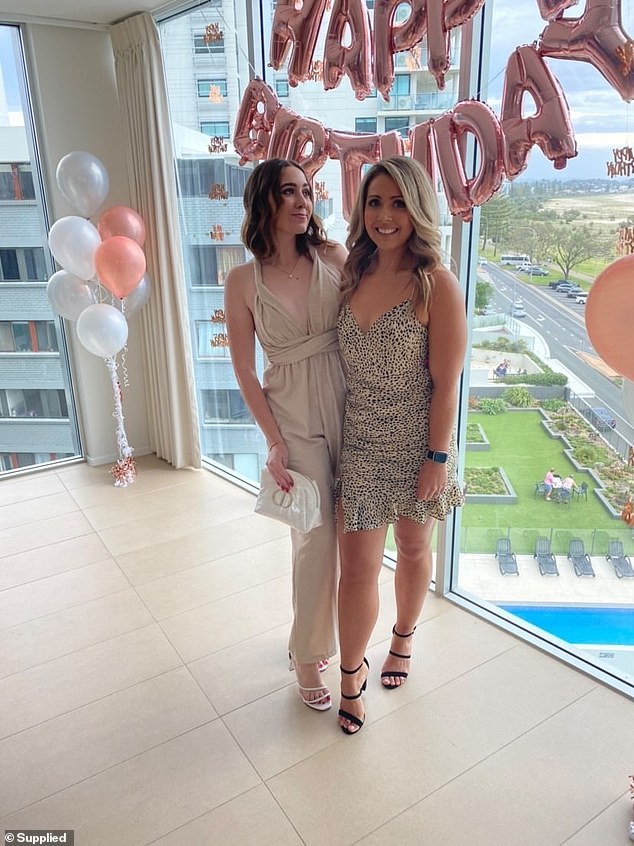 While going to see several different doctors and specialists to get different tests done, Kelsie suggested doing a full body skin check because she was due to get one. The suggestion led to the detection of the cancer in her right breast 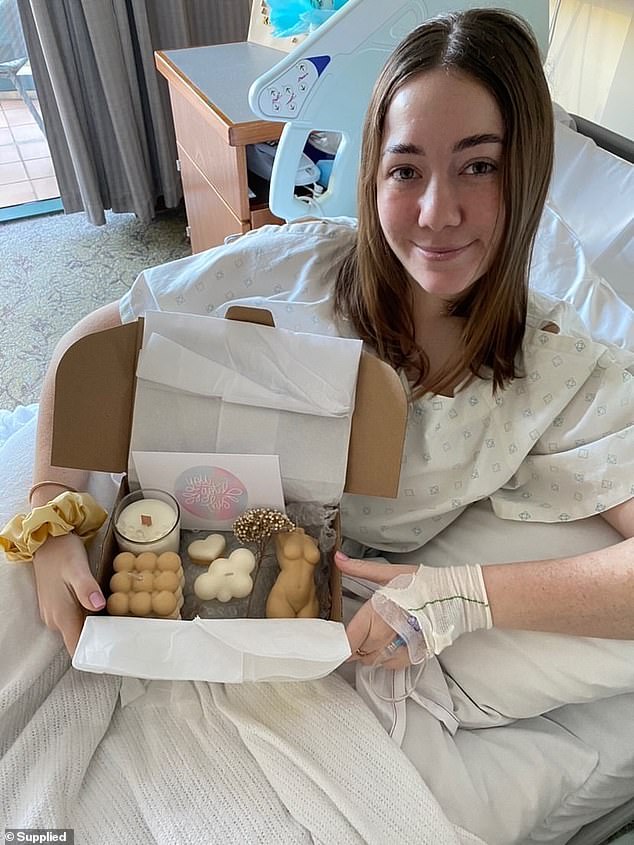 Four weeks later she had 7.5cm of breast tissue removed to cut out the melanoma and any surrounding tissue – the operation was one of three surgeries Kelsie had in a single day

Four weeks later she had 7.5cm of breast tissue removed to cut out the melanoma and any surrounding tissue.

The operation was one of three surgeries Kelsie had in a single day and five different body areas were operated on – including the melanoma cut out of her right breast, 3cm cut out from her hip, a section removed from her stomach, her tonsils removed and polyps cut out from her nasal airways.

While the melanoma was found during the ‘early stages’, doctors are concerned it could reoccur and reach stage two or three due to Kelsie’s autoimmune disease.

At the moment doctors are unsure whether the cancer has spread to Kelsie’s lymph nodes, which would make it a stage three cancer.

‘They said if the cancer isn’t stage three now then I need to prepare myself for what could happen in the future,’ she said.

Through the ordeal, Kelsie has had immense support from family and friends – especially her best friend, Seryse Lewis, who has been by her side the whole time. 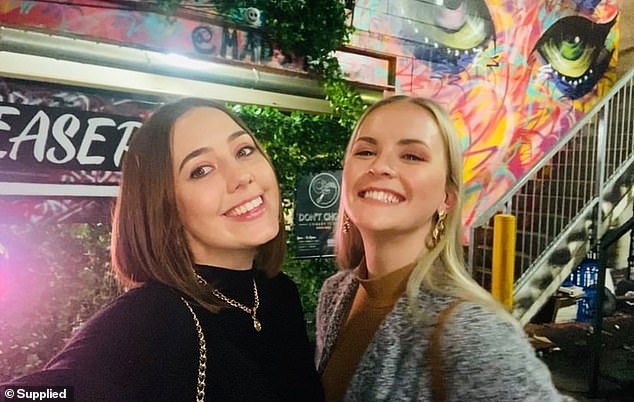 Through the awful ordeal Kelsie has had immense support from family and friends, and she particularly wants to thank her best friend Seryse Lewis (pictured right) who has been by her side the whole time

When speaking to others about her diagnosis, Kelsie noticed a sort of confusion associated with melanoma cancer and other diseases.

‘Going through this process – the appointments, the tests and the treatment – it all comes with pain and nausea.

‘It’s all quite dehumanising in a way.’ 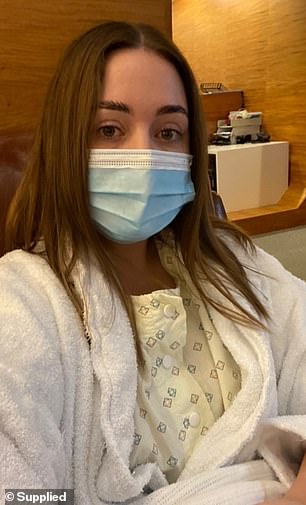 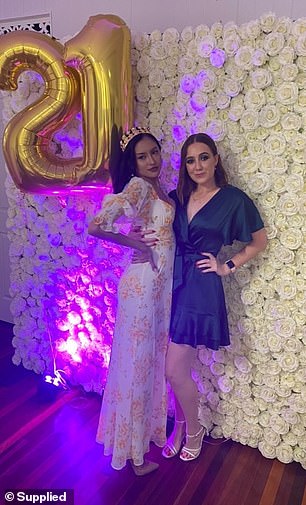 Currently Kelsie is awaiting to start an immunotherapy study trail treatment to help combat against both the skin cancer and autoimmune disease.

She will likely have a reconstructive breast surgery in six to 12 months, as long as she remains cancer free.

‘Although my cancer came from factors that were outside of my control, I hope people understand how lucky and fortunate they are to be able to protect themselves by being sun safe and wearing sunscreen SPF so they don’t get the same type of cancer I have,’ she said.

‘I wish I had the luxury and opportunity to protect myself but I had other factors coming in to play, despite putting in effort to wear sunscreen.’

What are the common symptoms of skin cancer?

Skin cancer occurs when skin cells are damaged, for example, by overexposure to ultraviolet (UV) radiation from the sun

There are three main types of skin cancer:

Melanoma – the most dangerous form of skin cancer

Melanoma is the third most common cancer in Australians 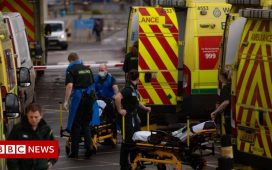 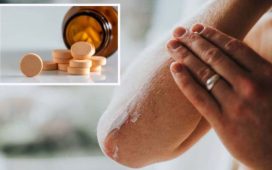 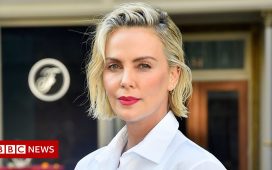 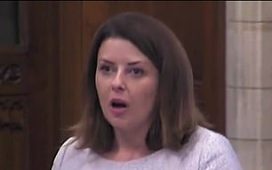 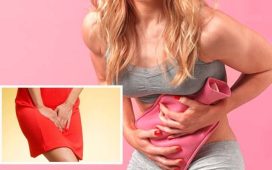 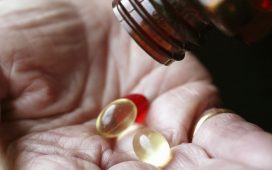