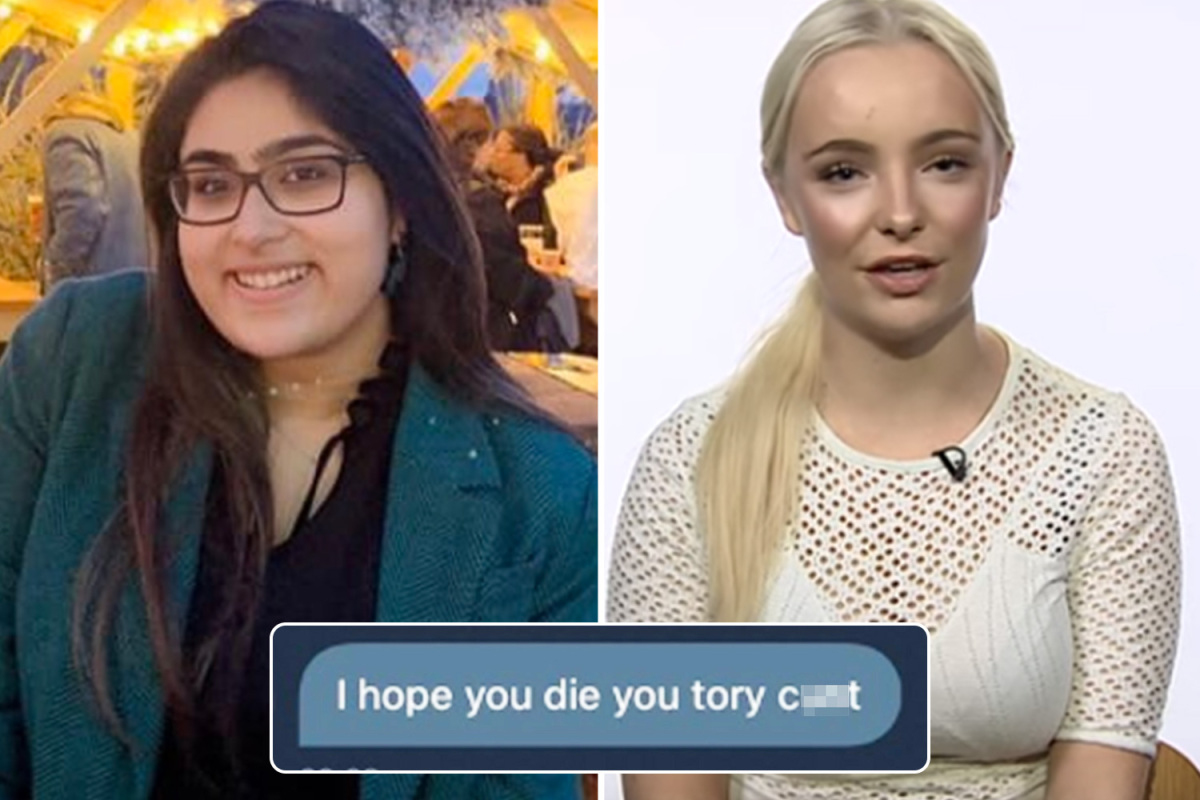 YOUNG Tories have revealed how they face vile racial abuse and even death threats for backing Boris Johnson.

The activists, as young as 18, are targeted by hate-filled far-left trolls – with one teen told her mum would be drenched in petrol and set on fire.

While Brits up and down the country celebrated the PM’s stonking election win, Conservative campaigners like Bhav Popat suffered shocking slurs.

Bhav, 21, was told to “bleach” her skin and “repent” to socialism after she campaigned for Tory candidate Darren Henry in Broxtowe, Notts.

Ms Popat, part of young Tory activism group Blue Beyond, told SunOnline: “I always get hate for being a Tory, for being a brown Tory, but since the election I’ve been more vocal and I get targeted messages.

“I get told how I should f***k off back to India and how I need to search for my soul – it’s constant.”

I get told how I should f***k off back to India and how I need to search for my soul – it’s constant.

Bhav, who has been a Tory supporter since she was 16, also claims she was attacked by Labour campaigners.

“While I was on the doorstep a white woman parked her car and spoke to me about ‘how I can be brown and a Tory?”

“On Twitter, someone else told me bleach my skin and my hair and said even then the Tories won’t accept me.

Emily Hewertson, 19, became a viral sensation after she appeared on the BBC’s Question Time, blasting Tory MPs for not getting Brexit done, back in May last year.

The teenager has since become an outspoken political commentator online, campaigning for Conservatives candidate Zac Goldsmith, but has been subjected to disgusting attacks on social media.

Emily Hewertson on being a young blonde Tory

Emily said: “I receive abuse all the time.

“A lot of people decide to target my looks saying I should stop talking about politics and stick to the prosecco, or go to Love Island instead.

“The worst bit of abuse I’ve ever had was the other night, when I go into my DMs on Twitter and someone says ‘If I ever see you on the streets I would throw petrol over you and set you on fire.

Someone said ‘If I ever see you on the streets I would throw petrol over you and set you on fire.

“‘And then I’ll find out where your mum lives and do the same.’”

“I couldn’t believe it.”

“It’s ironic that a lot of people sending me this hate, especially from women, describe themselves as feminists.

“It’s like, they’re only feminists if people agree with their politics.”

Has Ahmed, 23, is a Tory member and former candidate in local council elections in East London.

He was targeted by a man when out campaigning during the election, who told him “go to a white f*****g country”.

Has often suffers a barrage of abuse online with trolls suggesting he is a traitor because he is Muslim who votes Conservative.

“I have been alienated by friends.

“I suppose being called ‘sell-off’ by the normal people I used to speak is far worse than someone [you don’t know] shouting at you and screaming at you because of your beliefs.

Traitor, sell-off, coconut, Uncle Tom, all these words, which even now, when I speak about them really affect me.

“If you say you are part of the Conservative Party there are hundreds and hundreds of trolls messaging you every day with nasty comments and to be honest with you, words have an impact.

“And you start to think: ‘this is horrible stuff’.

He adds: “Traitor, sell-off, coconut, Uncle Tom, all these words, which even now, when I speak about them really affect me.”

Amber Dunbar, 23, from Moray in Scotland, said her friend had been subjected to death threats for supporting the Conservatives.

She said: “I find I have to put my Twitter on private – because your mentions get so full of things that aren’t nice to read.

“I have to let things blow over for a few days – but you shouldn’t have to do that. I understand that your political opinions come under scrutiny.

“But you should be able to talk about what you believe in.

“I’ve never had death threats, but I’ve had friends who have.

“I would never attack someone for their political beliefs.”

‘EVERYTHING IS AGAINST ME’

Jake William, 18, from Derbyshire, said that as a gay Tory supporter he feels like “everything is against” him.

He told SunOnline: “I have to hide it away a bit with certain people, because you don’t want them to say anything.

“I’m a young, gay, Tory, everything is against me.

“I’ve seen it a lot on Twitter saying I’m backstabbing the LGBT community – because Labour always support us.

“But the Tories backed gay marriage.”

Jake used to be a Labour supporter but switched sides due to their muddled policies on Brexit and other issues.

I’m a young, gay, Tory, everything is against me.

He said: “The young Labour voters go after people if they don’t like you, but we don’t care what party you support as long as you’re alright – we’re alright.

“It was more like, I was accepted when I was in Labour.”

“I used to vote Labour and I never had that experience or judgement where you’re forced to defend your views.”

Tory MP Andrea Jenkyns said it is time to “reinstate respect in politics”.

She told SunOnline: “People should learn in their youth that having different opinions doesn’t make you automatically a bad person.

We have to reinstate respect in politics and people should learn in their youth that having different opinions doesn’t make you automatically a bad person.

“People without arguments often use prejudice or a presumed moral superiority to shut people who think differently.

Ms Jenkyns, who represents Morley and Outwood in Yorkshire, plans to launch a parliamentary group to discuss ways to tackle cyber bullying.

She said: “This has been a very nasty election, with constant episodes of vandalism and threats.

“I want to set up an APPG on cyberbulling, to see how we can take action to stop the abuse of young people, in and outside politics.”

READ  Mueller testimony: is this Trump’s ‘moment of reckoning’?
Share on FacebookShare on TwitterShare on PinterestShare on Reddit
newsgrooveDecember 27, 2019