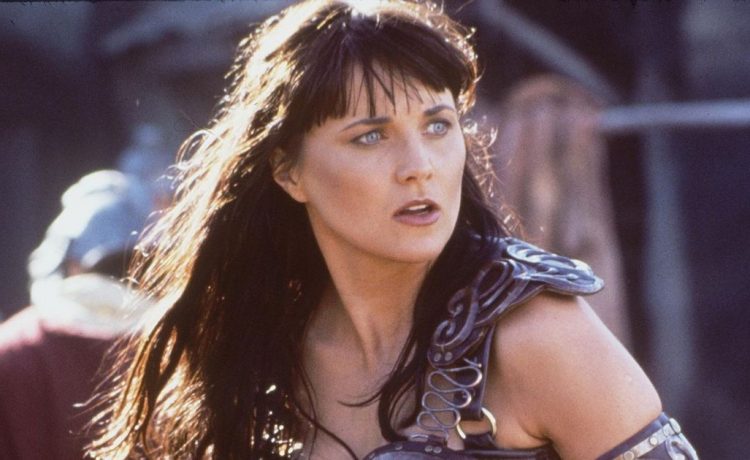 Actress Lucy Lawless became an icon of a generation and poster pin-up when she was cast in the lead role of fantasy TV show Xena: The Warrior Princess.

The lead role hurdled her to the height of 1990s TV fame as she played Xena, who was on a path of redemption after walking away from her life as a warlord.

The quirky action drama saw a huge following of fans who were obsessed with the female action hero.

New Zeland- born Lucy, 52, landed the role over two decades ago and is now virtually unrecognisable.

The actress took to her Twitter recently and although she has left her trademark battle-gear behind her, however she was in costume of sorts.

Appearing in a reindeer onesie she shared a funny picture of herself.

She wrote: “Renee O’Connor sent me this ridic onesie for my birthday and it is so freakishly cold that I’m wearing it as pajamas down the farm. Best Jimjams eva (as long as I don’t sit too close to the fire.)Thanks, Ren!”

In an accompanying video she looked worlds away from her Xena: Warrior Princess days.

Wearing the onside with her blonde short hair and hood up, fans would be hard pushed to recognise her as the titular character in the fantasy series from 1995 to 2001.

The shot also reveals her humble-home life with a comfy back drop and her dog enjoying a snooze in the dimly lit room. A second image shows Lucy outside wearing over-sized specs and a country-coat.

Xena was of course originally a recurring character in Hercules: The Legendary Journeys before the title role of the spin-off six season series catapulted her to a new level of fame.

She secured the part by chance after Vanessa Angel, who was originally cast in the role, fell ill and was unable to travel to New Zeland for filming.

The star, who became globally famous due to the shows appeal, previously said: ‘I am still staggered that people remember [Xena] and me all these years later.”

She revealed she’s been spotted in New York, Fiji, as well as the Philippines and Turkey.

She also starred as Lucretia in Spartacus: Blood and Sand and associated series.

Her most recent role was alongside Bruce Campbell in Starz horror-comedy series Ash vs Evil Dead.

But her links to the show which launched her global success don’t end there.

She’s actually now married to the show’s co-creator, Robert Tapert, and together they have two sons, Julius and Judah.

Lucy also has a son and a daughter from her first marriage, which ended in 1995.