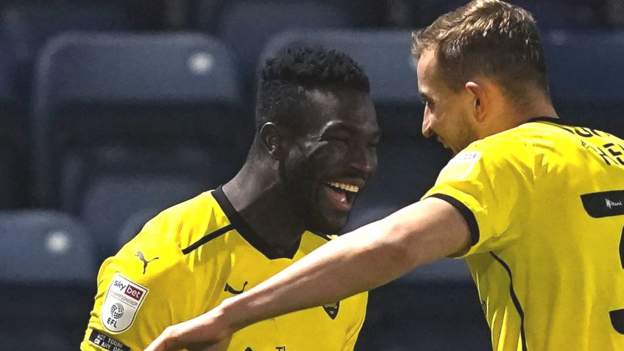 Rampant Barnsley made it nine wins in 10 matches as Valerien Ismael’s side stepped up their exciting Championship promotion bid with victory at bottom club Wycombe.

It took a soft, disputed Cauley Woodrow penalty to set them on their way in first-half injury time after home defender Ryan Tafazolli’s light tug on Barnsley defender Michal Helik.

But two superb second-half strikes from January deadline signing Daryl Dike – the first a bullet header, the second a first-time finish from eight yards – wrapped up the Tykes’ fifth successive away win.

The goals came either side of Barnsley skipper Alex Mowatt being given a straight red card on 73 minutes for a two-footed tackle.

But Barnsley made light of their one-man disadvantage with Dike’s second goal on 81 minutes.

Uche Ikpeazu finally got a consolation goal for Wycombe, who finished strongly, going close twice more in an ill-tempered climax.

Wycombe had won twice in six games, as many wins as in their previous 20 matches. But Barnsley are now unbeaten in 12 games, their longest unbeaten run in the second tier or above since February 2002.

And it was always going to be a long way back after referee Darren Bond opted to give a penalty when Woodrow’s powerful header was blocked and Helik went down very easily as he tried to latch onto the rebound.

The penalty came two minutes into first-half injury time – and home manager Gareth Ainsworth was still making his feelings known to the match officials as they disappeared down the tunnel.

But worse was to follow for Wycombe when Barnsley struck again four minutes after the restart when Mads Andersen nodded back across goal and Dike bustled in to power home a close-range header.

Hopes rose for the hosts when Mowatt was sent off for his challenge on Scott Kashket – a decision which Barnsley boss Ismael said they will appeal against, in the hope of not losing their skipper to an automatic three-game ban.

Butinstead it was Barnsley who closed the door on a comeback when, from Callum Brittain’s beautifully delivered near-post right-wing cross, Dike steered home his low right-foot shot.

Ikpeazu had the last word and there could have been more late joy for the still spirited Buckinghamshire side. But, with just nine games left now to make up a 12-point gap to safety, their prospects look bleak.

“I’ve just said to my players that if they keep playing like that every game, we’ll stay up because teams will not be able to handle that. I’m really proud of the boys. They were outstanding. The work-rate and the effort was just awesome.

“Barnsley are the form team in the league. Ismael is doing a brilliant job. But they’ve scored three goals and then they shut up shop when they went down to 10 men because, at 2-1, they’re worried about their lead.

“At 3-1 they had that safety. There was a lot of appealing from the opposition bench and it went a bit crazy sometimes. The crowd would have loved that, though – it was a full-blooded battle with both teams going for it.”

“We expected a fight against a Wycombe side who play with a lot of energy, a never-give-up mentality and it was important for us to face that and to stay strong.

“The red card for us was never, ever a red card – the referee lost control. It was the feeling on the pitch that Wycombe were going to try everything not really properly – some situations were really embarrassing.

“The referee lost completely the control and that’s why we have to appeal the decision. We will do because it is unjust, what has happened against Alex.

“It was never a bad foul – he tackled over the ball without a straight leg and that’s why we can’t accept this. We have to fight against it.”