THERE’S been a lot of highs and lows in the world of travel in 2019, ranging from the pilot who bought everyone on his delayed flight a burger to Thomas Cook going bust.

But when it comes to air passenger behaviour, it’s the lows that come to mind more often than not.

As 2019 draws to a close, Sun Online Travel has rounded up some of the worst-behaving air passengers this year – and we’ve seen some awful examples.

So from man who dried his socks on the overhead air vents to the person who left a bag of wee, here are the flyers you never want to end up sitting next to.

Passengers who leave containers of urine on planes after they leave apparently happens more often than you think.

This year kicked off with a wet one – a disgusting passenger left a bottle of wee on their seat.

And to make it worse, pictures of the bottle shared on Instagram account Passenger Shaming showed some of it had apparently spilt onto the seat.

It’s not the only incident of its kind this year either.

In October this year, another passenger left a bag of urine tied to the seat back pockets.

And one family allegedly used a plane seat to change their kid’s dirty nappy, before also letting the boy pee into a bottle and leaving the dirty wipes in the plane seat pocket.

READ  ‘Moderate becoming good’: my journey to every place in the shipping forecast

One woman was accused of splattering fellow passengers with blood after a blister on her feet popped mid-flight.

The blood hit the wall and window of the plane, and even left another person’s book covered in blood.

In another incident, a man appears to have boarded a plane with an open wound, which was seen oozing yellow pus during the flight.

Passengers branded savages after leaving plane littered with food, cans and even a SHOE

The situation was so bad, there was a puddle of liquid next to his feet.

One of the most complained about acts on a flight is passengers doing disgusting things with their bare feet on show.

Earlier this month, a man was seen picking his feet during a flight, prompting people to call for him to be jailed for the revolting act.

Another flyer was seen using his bare feet to swipe through the in-flight entertainment system – and his toes even left a mark because they had been propped up for so long.

One trashy flyer was seen making herself at home and putting her bare feet onto the headrest of the passenger in front of her.

READ  Australia travel ban: Can I travel to Australia? When will restrictions lift?

Even worse for one woman, who became the victim of someone who used her headrest to prop up their dirty feet.

Passengers have also been spotted drying their laundry on flights with regularity this year.

One was seeing using the overhead air vents to dry his “sweaty socks”, prompting social media users to brand it a “crime”.

But the act, which made some “literally gag”, wasn’t the only time a passenger dried their socks on a flight this year.

Another man was spotted drying his socks by wedging them against the window shades.

And socks aren’t the only dirty laundry being aired in public – a group of passengers were spotted drying their wet swimsuits on the headrest earlier this year.

No traveller appreciates close encounters with another passenger’s grooming habits, it seems.

A business class passenger was slammed for his crass behaviour after he started shaming his head during a flight.

Another woman was seen combing a wig against her tray table in gross act.

But it could be worse.

Last year, passengers were spotted giving themselves and even other travellers pedicures.

One cabin crew even revealed that a passenger had left poo under their seat. 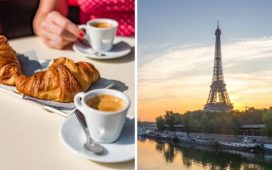 UK green travel list: France to reopen to vaccinated Brits – when can I holiday in France? 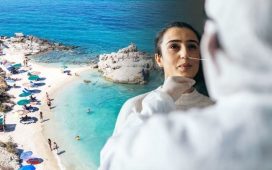 Skyscanner reveals travel trends for 2021, including ‘delaycations’ and flight upgrades