A tiny 3D printed boat about a third the thickness of a human hair has been created to follow bacteria known as microswimmers to better understand how they work.

Researchers from Leiden University produced the tiny boat – named Benchy the tugboat – using a new technique that will allow it to swim behind tiny particles.

From prow to stern, this little boat measures 30 micrometers or about 0.001 inches and required an electron microscope to capture an image of the completed object.

The team say future 3D printed ‘microswimmers’ made using their technique could be designed to deliver targeted drugs inside the body or diagnose a condition. 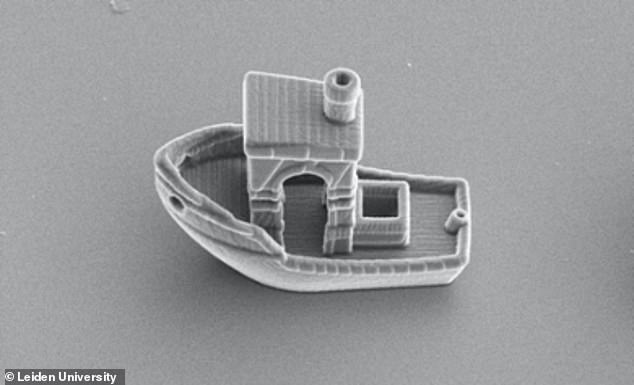 From prow to stern, this little boat measures 30 micrometers or about 0.001 inches and required an electron microscope to capture an image of the completed object

Physicists Rachel Doherty and Daniela Kraft turned to the novel 3D printed boat in their efforts to understand the microswimmers – small particles found in fluids.

Most research of this type is carried out on sphere shaped particles, but 3-D printing offers new possibilities, according to the research team.

They also printed spiral shaped particles, which rotate along while they are propelled through water to follow microswimmers that can be seen under a microscope.

The microboat doesn’t have a propellor and is based on a standard boat design used for testing 3D printers – they were testing a new microscale 3D printer.

The team say it is even able to set sail in water – and could follow around the microswimmers in droplets of fluid under a microscope.

It’s a fully functional ‘artificial microswimmer’ that can propel itself through liquid through a chemical reaction that involves a small piece of platinum reacting with hydrogen peroxide in the environment to provide propulsion.

This isn’t the first artificial microswimmer, but previous experiments were made using chemical methods to produce simple spherical shapes.

‘A laser is focused inside a droplet that locally hardens in the focal spot of the laser,’ researcher Kraft told Gizmodo.

‘By moving the laser through the droplet in a controlled way, we can write the swimmer shape that we want.’

The team say using 3D printing techniques allows them to make a range of shapes to find the best design for following real microswimmers through fluid.

In future the technique could also be used to create synthetic microswimmers that can travel through the human body to diagnose conditions or deliver targeted drugs. 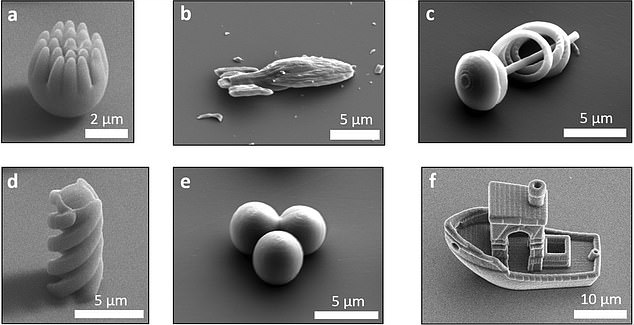 Researchers created a range of other objects as part of the process of testing their 3D printed techique. This included a starship, balls and a spiral-type object that may be used for real

‘Ultimately, it will allow a greater control and design of the behavior of synthetic microswimmers, useful for applications in therapeutic diagnostics and drug delivery,’ according to the team.

The name, 3D Benchy, is short for 3D Benchmark, named due to the fact it is a test vessel, rather than something that will be deployed in full scale experiments.

They had to use extremely accurate lasers to harden tiny droplets of material used to make up each layer of the printed tugboat.

Unlike previous 3D printed microscopic projects, this wasn’t just an effort to produce ‘artworks’, as Benchy is a fully functional synthetic microswimmer.

However, the ‘tugboat’ design isn’t the most efficient, it was created to prove that the last could carve out fine detail if necessary. The real research will use printed spirals and helix shapes that can propel themselves in a corkscrew motion.

‘3D Benchy is a structure that has been designed to test macroscopic 3D printers because it has several challenging features, and it was natural to also try it at the micrometre scale,’ said Kraft.

‘In addition, making a swimming micrometre-sized boat is fun.’

The research was published in the journal Soft Matte.