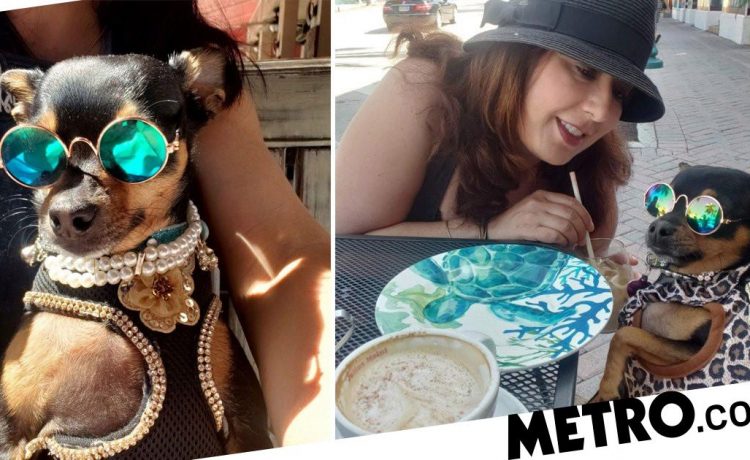 At just three months old, Presley the chihuahua mix was abandoned – but four years on, she lives a life of luxury.

Now she enjoys manicures, a personal designer and lunches in restaurants.

A frequent visitor to the local beaches, the pooch is rarely ‘naked’ and instead is found dolled up in dresses and rhinestones.

‘I got Presley after my mum passed away – her favourite artist was Elvis and she wanted me to have company.

‘Presley is truly a pampered princess now – her collars are decorated with rhinestones and all glitter.’

Presley was rescued at three months old and it’s thought the lack of nutrition has caused a development delay.

After her rough start, Rebecca has always made sure Presley has the best of everything.

She estimates Presley owns over 150 dresses alone, alongside numerous t-shirts and tutus but her quirky outfits have become part of her identity.

She added: ‘I have a personal designer for her and I make sure Presley is never seen in the same outfit twice.

‘Instead we give her castoffs to less fortunate dogs, and I make sure Presley has the latest custom made clothes in her many wardrobes and drawers.

‘I must have spent well over 10K dollars on Presley as we fly all over the country, where she enters dog competitions.

‘She’s even become Miss July in a dog calendar and loves a stay in a hotel.’

The pooch always being recognised on her daily walks and even has her own Instagram.

Rebecca said: ‘She is the sweetest dog and she loves to wear all the outfits I pick out for her.

‘She lives for it – she’ll jump up on the chair, ready and waiting when she sees me getting some clothes out.

‘I work in real estate, and she’s always on the road with me, dressed in the different outfits I make for her.

‘One of her favourite things to do is wear glasses and she’s always super friendly.

‘She is a little bit of a diva, and there are some restaurant she refuses to eat out in.’

Rebecca wants to encourage others to adopt chihuahuas like Presley.

She said: ‘Chihuahuas are the second most common dog you’ll see in a rescue centre and I was determined to help out – this is what led me to getting Presley in the first place.

‘I have two other purebred chihuahuas, BellaDonna, 10, and Chi-Chi, eight, but with getting Presley recognised, I hope others will be inspired to adopt too.

‘I reckon at least ten people have adopted the breed because of me.

‘Now, my dogs are everything to me and I always say, any potential suitor must love the dogs just as much – else it won’t work!’


MORE : Lost dog’s face says it all as he’s reunited with owner after 7 years on streets


MORE : Dog’s mouth glued together when it opened parcel dropped through door

READ  Scotland's salmon crisis: 'Anglers only want one. But it's just not happening'
Share on FacebookShare on TwitterShare on PinterestShare on Reddit
newsgrooveNovember 29, 2020

Small dogs: why are tiny hounds more aggressive than big ones?