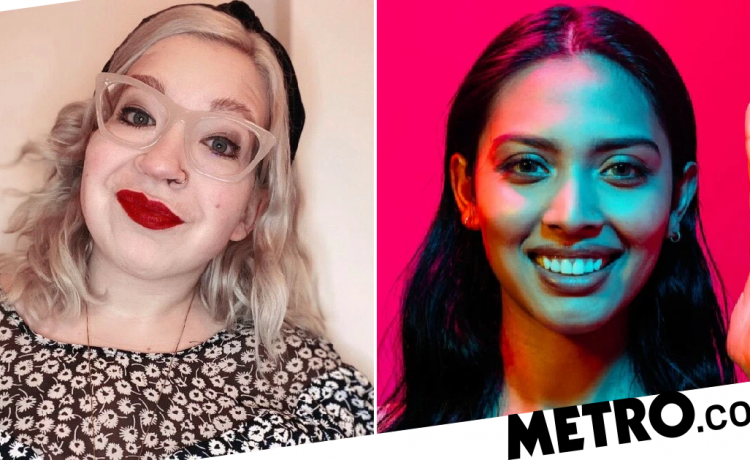 Jenny Cavallero was hoping to use Tinder’s verification feature to add a tick to her profile, letting potential matches know she’s a real person.

But when she tried to follow the steps where the app asks users to copy various poses, she faced an issue.

As Jenny, from Washington D.C., U.S., has disabilities that mean she can’t straighten her hands, the app said she had failed to match the pictures shown on screen.

The writer, librarian and comedian sent a message to the support team asking if there was another way she could be verified.

After waiting over two months for a reply, she says was told going through the steps in the app was the only way and they could not help her to do it manually.

Although she can still use the app without verification, her experiences led her to decide to quit using it altogether.

Jenny tells Metro.co.uk: ‘Any time a safety feature is included in something as potentially risky as a dating app, I want to utilize it.

‘Verification ensures that who you’re chatting with is who they say they are. There are so many things people can lie about besides that, but at least you have some reassurance before you were to show up to meet them. I use it myself as a screening tool.

‘That I wouldn’t be able to be included in this community safety feature because of the way my hands do or don’t move is exclusionary and discriminatory.’

She tried to use the verification feature on November 27 but didn’t hear back and she says she assumed she wasn’t going to.

But this week she received a message from the support team.

She explains: ‘I included an example photo I’d tried to use in my verification process, because since it seemed to use AI to automatically reject or verify, it needed a human’s eye on it.

‘I said: “The verification feature failed for me because of my disability. I could not position my hands as requested. All of my photos are solo shots, so I don’t know why it rejected it entirely as the faces do match.”

‘They apologised for the wait time and said: “While I’d love to help further, we are not able to alter or expedite the review process. Please follow the instructions to photo verify in app, and once your account has been verified, a checkmark will appear on your profile at that time.”

‘This seems to be a form response that doesn’t address my actual problem, even though I clearly stated it was a disability issue. So, they either didn’t care to address it or don’t have any mechanism in place to do so and automatically just rejected my request for assistance.

‘If they want to use this method to verify people, there needs to be a mechanism for those who can’t do what’s requested because of disability to have an alternative.’

While users can quit and restart the verification process and potentially be given alternative photos to copy, the poses they are asked to follow are chosen at random and there is no guarantee it would be one they could follow.

She said: ‘I posted about it mainly out of frustration, because little acts of ableism add up and make me exhausted. I wanted to call attention to it because Tinder touts it as a safety feature, but the way it’s currently designed excludes certain people from using it.

‘I don’t want other people to have this same experience. Dating is hard enough when you have a disability, these apps shouldn’t be adding to the problem.

‘People have been really supportive since I posted it, from a user-experience perspective, and as a disability rights issue.

‘Disabled people face much larger issues than this on a daily basis, especially BIPOC and LGBTQIA+ people. But even seemingly small things cause harm. We shouldn’t be excluded, nor ignored when we call attention to a problem.’

Tinder said that they are continually working to improve users’ experiences with the app and told Metro.co.uk: ‘We’re so sorry to hear anyone has had a difficult experience with our Photo Verification feature, and believe that verification should be as accessible as possible to everyone.

‘We are in contact with anyone who has reached out with this experience and are working with them to verify their accounts.’


MORE : Shrugging is the most used emoji on Tinder in 2020


MORE : Tinder reveals only active profiles can show up as potential matches

READ  Do not fear the smear: how to overcome anxiety about cervical screening
Share on FacebookShare on TwitterShare on PinterestShare on Reddit
newsgrooveFebruary 7, 2021