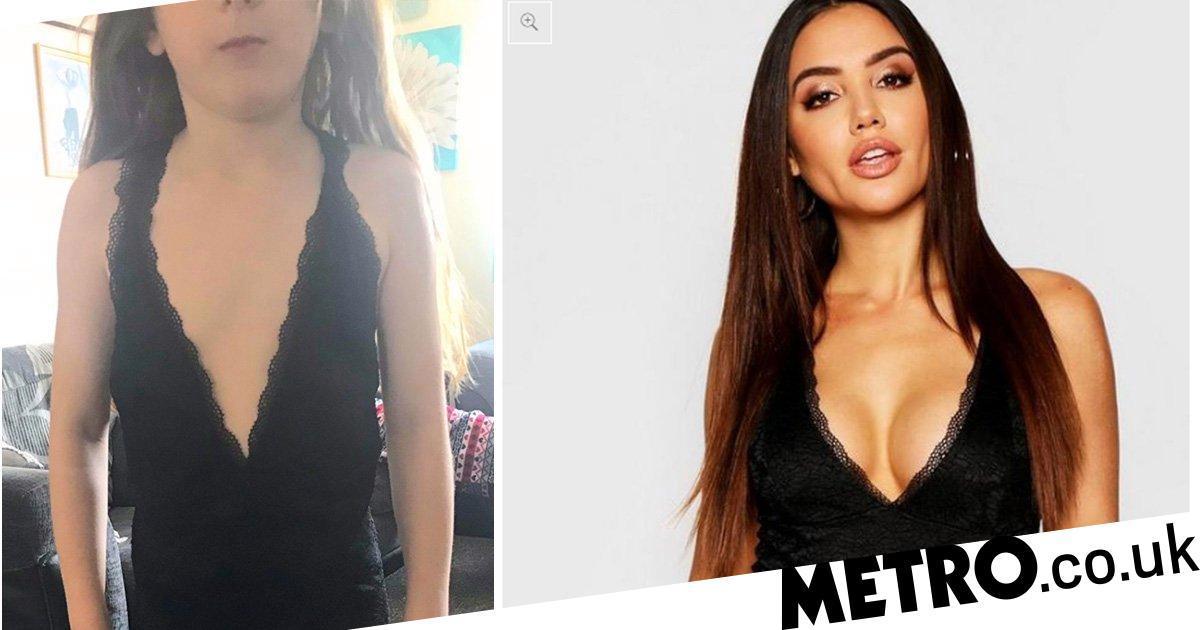 We’ve all experienced the disappointment of ordering something online only for it to be a bit of a squeeze.

Ashleigh Warrington, though, says the bodysuit she ordered from Boohoo was so small, it fitted her seven-year-old cousin instead.

Ashleigh bought the black ‘strappy lace premium’ bodysuit last week for an upcoming hen party, but when the order arrived, she couldn’t get it past her calves.

The size 18 student says she ordered a size large but it was far too small.

To make a point, the 17-year-old took the new purchase to her aunty’s house where her seven-year-old cousin Melissa Johnson tried it on.

‘When I opened it, I thought “that could fit my little cousin,”‘ Ashleigh, from Wirral, Merseyside, said.

‘I felt so disappointed. I’ve always struggled with my body confidence and that knocked me down.

‘No wonder people feel so insecure about their bodies.

‘It wouldn’t go near me. It went round my ankles when I put it on – that’s as far as it went.’

Ashleigh says that she thought maybe she had been sent the wrong size but she checked the tag and it was labelled as a large.

She said: ‘I thought ‘how on earth is that a large?’

‘The clothes are so small. I think many of their customers will be classed as plus size, even if they aren’t in other places.

‘I feel like Boohoo really need to concentrate on their plus size range.

‘They need to broaden their ideas with plus size items and really focus on that.’

Ashleigh said: ‘Whenever I usually go shopping, I go straight to the plus size part.

‘I will probably go to somewhere else in the future. I don’t want that to happen again and you still have to pay for delivery.

‘Yes, there’s a lot of thin people, but I feel like Boohoo focus too much on them.

‘I took the parcel to my aunty’s and got Melissa to try the bodysuit on.

‘Apart from it being a bit long on her, it fit perfectly, and she’s small for her age too. She’s really skinny.

‘Boohoo asked what the order number was and the product number, but I’ve not heard anything else since.”

MORE: A customer gave a restaurant a very detailed order to get the perfect burger for a dog

MORE: Burnout is officially recognised as an illness by the World Health Organisation

READ  Summer is sorted – Aldi is selling a bargain £39 outdoor pizza oven
Share on FacebookShare on TwitterShare on PinterestShare on Reddit
newsgrooveMay 28, 2019