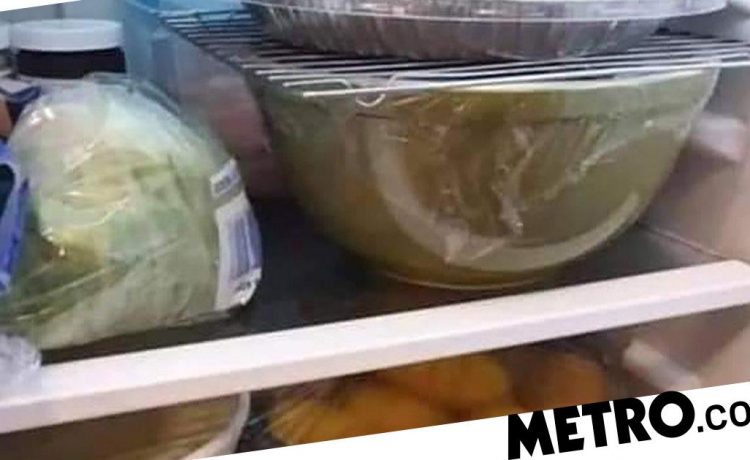 With all the elements of Christmas dinner, fridge space can be at a premium.

But one woman has revealed her tip to maximise shelves and squeeze everything in.

A post showing cooling racks, stacked on top of what is already in the fridge, with more items placed on top was shared in a popular Kmart Facebook group.

Kmart is a store in Australia and the post recommended using their cooling racks, but it’s not available in the UK so you can use any you have.

Of course, if you don’t have enough racks, you can try chopping boards or any other flat item to create extra shelves.

You can also move the shelves in the fridge around to ensure you can stack as much as possible.

It makes it easier to prepare stuff ahead of time and store it, ready to be reheated.

Although useful, it is important to cover any dishes or containers with lids, foil or wrap to stop things from getting contaminated underneath.

The picture shared on Facebook included the caption: ‘Remember to use your cooling racks for extra space around the holidays.’

It might seem simple but others online loved the idea and said it would make cooking a big meal much easier.

One said: ‘That is an awesome idea!’

Another added: ‘How didn’t I think of this before? Genius.’

After the festive season is over, and the kids are back at school, you might want to try this lunchbox fridge hack, which one mum says has helped make sure her kids eat everything.

She puts everything in sealed containers and lets her children choose what they want from her ‘buffet’.


MORE : Mum shares genius hack that ensures kids eat everything in their lunchboxes

READ  A 'Morrisons' van hit my car – but it turned out to be Ocado
Share on FacebookShare on TwitterShare on PinterestShare on Reddit
newsgrooveDecember 16, 2020