Dogs often get up to all sorts of mischievous things when their owners aren’t looking.

Golden retriever Huckleberry is no exception, and for some reason has started to enjoy nothing more than chilling on his owner’s roof.

Huckleberry simply enjoys taking in the view of his hometown of Austin, in the US – but naturally some people are concerned when they spot the dog in a seemingly dangerous position.

Sick of people constantly knocking on her door – albeit with good intentions – Huckleberry’s owner has put a sign up outside her house explaining why he loves the spot so much.

The sign reads: ‘Huckleberry is living up to his name and learned how to jump onto our roof from the backyard. We never leave him in the backyard without someone being at home. He will not jump off unless you entice him with food or a ball!

‘We appreciate your concern but please do not knock on our door – we know he’s up there! But please feel free to take pictures of him and share with the world!’

Before installing the sign, the woman said she would have four to five people a week alerting her to Huckleberry’s presence.

People would say: ‘Do you realise there’s a dog on your roof?’

Since the sign was put up, this number has reduced to one or two a week who mistakenly walk past the sign.

The photo of Huckleberry sitting on the roof was shared to Reddit and immediately many users had some burning questions about the golden retriever.

One person asked whether she can hear Huckleberry on the roof, she replied: ‘Yes, it’s annoying, especially with an infant who’s trying to nap.

‘The worst is when someone starts waving at him and he bolts to the front of the house – I’m surprised all my shingles are still intact.’

Another person asked the question everyone was thinking about – whether Huckleberry has ever had a poo on the roof.

She commented: ‘Now that you’ve said that… I have been wondering why my gutters have been clogged and there aren’t any trees around them…’

Another person spotted Huckleberry while walking past the house and said: ‘He barks at joggers to get more attention, as if he needs it.’

Huckleberry even has his very own Instagram page which documents his fun – like his namesake novel The Adventures of Huckleberry Finn, written by American author Mark Twain.

Sharing a picture of Bluebell on the roof, they wrote from Huckleberry’s perspective: ‘Introducing my new little sister… Bluebell. Named after my favourite Texas ice cream and from the same breeder I came from.

‘I’m still not sure what to think of her but my family seems in love so I think I will be too.’ 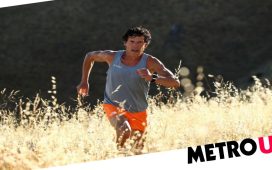