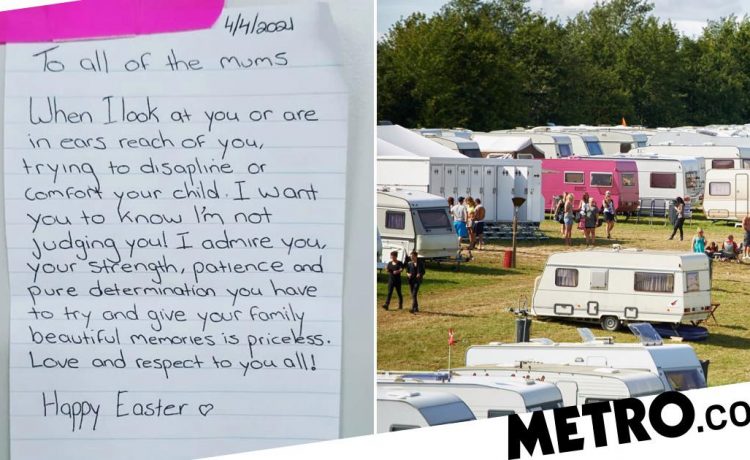 Being a mum can be tough – it’s easy to feel as though people are judging you when your child is screaming.

But one woman discovered a handwritten note from a stranger that assured her that is not the case.

Somebody left the heartwarming note – that congratulated all mums for doing a great job – at a caravan park in Victoria, Australia.

The stranger stuck the note to a wall in the communal washroom of the caravan park, and the message that was revealed by the woman who found it is music to the ears of any mum.

‘To all of the mums, when I look at you or are in ears reach of you trying to discipline or comfort your child I want you to know I am not judging you,’ reads the note.

‘I admire you, your strength, patience and the pure determination you have to try to give your family beautiful memories is priceless.

‘Love and respect to you all! Happy Easter.’

The mum who found the sweet note shared it online, and it was quickly circulated through online groups, with many women saying it was exactly what they needed to hear.

Some even shared the hurtful comments they had experienced while looking after their kids:

‘I don’t think some people realise how hurtful their words can be sometimes,’ shared one woman.

‘This morning my girlfriend and I were having a little chat through my window as it was still raining. This older lady who camped behind us told us we were appalling,’ she said explaining they were left speechless.

‘She went on to say she had come here for a quiet weekend away and all she could hear was our noisy kids and us yelling at the top of our lungs and we have no control over our kids at all.’

The said she had been keeping her children entertained with crafts and films – even leaving the campsite to visit local markets and eat out so they wouldn’t be a nuisance to others.

‘She was totally out of line,’ she added.

‘My kids have been in our van each night by 7.30 pm, we don’t come out till after 8 am in the mornings. We don’t let them run around people’s campsites or anything. We have certainly not yelled at the top of our lungs and neither have the kids.’

Many other mums were quick to praise the generosity and thoughtfulness of the note.

‘Another queen lifting other queens up,’ one woman commented.

‘We need more kindness like this in the world,’ added another.

A third said: ‘I wish all campers thought like this. Taking children camping is sometimes difficult.’

So, before you roll your eyes at loud children next time your out and about, remember this note instead.


MORE : 11 spring essentials to freshen up your home and garden


MORE : ‘Ask for ANI’ code for domestic abuse is being used every 30 hours in the UK


MORE : Eight must-have products to get your garden looking its best this April

READ  Fuming mum defends dressing her kids in cheap clothes after she was mum shamed for wearing pricey outfits
Share on FacebookShare on TwitterShare on PinterestShare on Reddit
newsgrooveApril 6, 2021