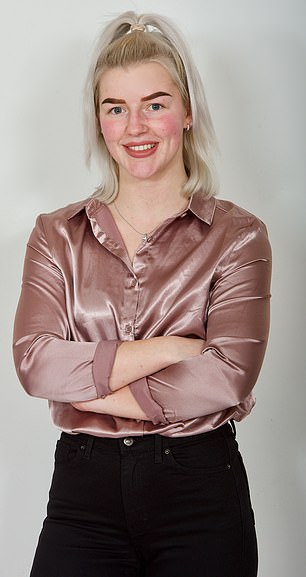 Gemma Towle was just 16 when she had her first sunbed session. ‘I was desperate to look ‘healthy’ and tanned ready for my school prom,’ she says

Gemma Towle was just 16 when she had her first sunbed session. ‘I was desperate to look ‘healthy’ and tanned ready for my school prom,’ she says.

‘I didn’t want to look pale beside my friends, who were using sunbeds.’

Despite it being illegal to use sunbeds at tanning salons below the age of 18, Gemma, from Blackpool, found a way around it.

‘My friend’s parents hired a sunbed at their home and I used it,’ she recalls.

‘I knew about the sun and the risk of skin cancer, and knew I was at higher risk because of my fair skin, but I didn’t think a few weeks would be a problem.’

Gemma, a medical testing lab assistant, used the sunbed for four to six minutes every other day for a couple of weeks, but her parents found out and banned her. But as soon as she turned 18, she went to a High Street tanning parlor.

‘My Instagram and Facebook feeds were full of people with golden tans and all my friends had the same look,’ says Gemma, now 22. ‘It’s the same with reality TV, everyone looks so healthy and glamorous.

‘I probably had around 80 sessions in total, three times a week for a month or so over two-and-a-half years — usually around springtime before a holiday.’

Now she bitterly regrets doing so. For just after turning 20, Gemma noticed a raised bump on the side of her nose that was about 8 mm in diameter and irregularly shaped,

‘It looked similar to a blister, but it had a pearly transparency to it,’ she says.

‘It wasn’t red or sore though, so I didn’t pay much attention at first. It was only when I saw a dermatologist about six months later about a red scar on my knee that I thought to mention it.’

He took one look and said Gemma needed a biopsy. ‘He didn’t mention cancer but when I heard the word biopsy, I began to panic,’ she says. 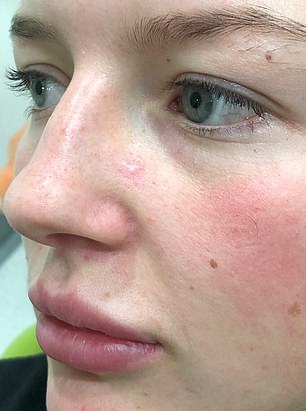 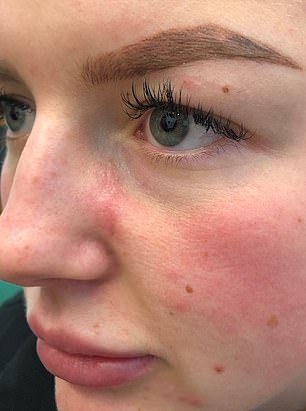 When Gemma first started using sunbeds, she played down the risks. ‘My skin turned a pinky-red at first, but it didn’t hurt and it eventually turned brown, so I didn’t think of it as being burnt,’ she says

Two weeks later, Gemma’s worst fears were confirmed: the bump was indeed a cancer. ‘I broke down when I heard,’ she says.

‘My main worry was that the operation to remove it would disfigure my face.’

Dr Vishal Madan, a consultant dermatologist at Salford Royal NHS Foundation Trust in Manchester, says he is seeing more younger people under 40 with skin cancers — fuelled in part by the use of sunbeds.

‘The home hire sunbeds are a particular worry as they may not be calibrated correctly, and it may be unclear how well-maintained the sunbeds are,’ says Dr Madan, who treated Gemma.

There are various kinds of skin cancer — the most serious being malignant melanoma, which may start in an abnormal mole and can spread to other parts of the body.

Gemma had a basal cell carcinoma (BCC), the most common form of skin cancer. BCCs are sometimes known as rodent ulcers, because, if advanced, they resemble a rodent burrow as they erode the surface of the skin. Unlike melanomas, BCCs do not resemble moles but usually look pearlised or waxy, red or crusty.

Non-melanoma skin cancers account for less than 1 per cent of skin cancer deaths, but there has been a 65 per cent increase in cases in the past decade, according to Cancer Research UK.

Dr Maden told Gemma she was the second youngest person he had ever diagnosed with a BCC. ‘Twenty years ago I rarely saw anyone under 40 with a BCC but now I see them more and more,’ he says. 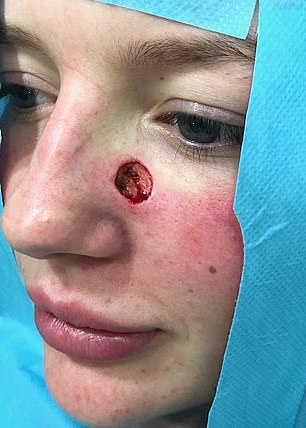 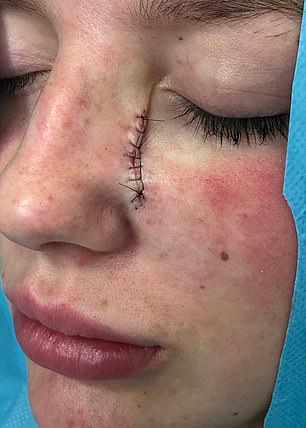 Shock: Gemma’s face before and after her skin cancer surgery. Gemma had a basal cell carcinoma (BCC), the most common form of skin cancer

‘There are a number of factors fuelling an increase in BCCs — the package holiday generation of the 1970s hitting old age, earlier diagnosis and better reporting of cases, as well as sunbed use.

‘Despite the health warnings about the risks of skin cancer from sun exposure and sunbeds, young people also face pressure from social media to look a certain way and many still want a tan.

‘Gemma had no other risk factors for skin cancer other than having fair skin and using sunbeds at a young age. While no one can prove her skin cancer is a direct result of sunbed use, I can’t think of another plausible cause.’

The World Health Organisation declared sunbeds a carcinogen in 2009 after a review of 20 studies on sunbed use, published in The Lancet Oncology, found exposure to sunbeds under the age of 30 was associated with a 75 per cent increased risk of melanoma.

A review of studies by Stanford University in the U.S. in 2012 concluded that exposure to sunbeds under the age of 25 also raised the risk of developing a BCC by 40 per cent.

But tanning parlours are still found on most High Streets and The Sunbed Association, the voice of the industry for tanning salon operators, manufacturers and distributors of indoor tanning equipment, claims three million people in the UK use them, adding that it does not admit home hire companies to its membership and advises people with type 1 fair skin (pale white skin that burns without tanning) not to use sunbeds at all.

Natasha Paton, health information manager at Cancer Research UK, says: ‘Like the sun, sunbeds give off ultraviolet rays that can damage the DNA in skin cells, and over time this damage can build up to cause skin cancer.

‘Using sunbeds increases the risk of both melanoma and non-melanoma skin cancers such as basal cell carcinoma. A tan is a reaction to damage in skin cells when it is exposed to too much UV radiation; there is no such thing as healthy tanning.’

When Gemma first started using sunbeds, she played down the risks. ‘My skin turned a pinky-red at first, but it didn’t hurt and it eventually turned brown, so I didn’t think of it as being burnt,’ she says.

‘When my dad found out he banned me from sunbeds. My parents had always been strict about protecting my skin from the sun when I was a child and applied sunscreen religiously. They couldn’t understand why I’d put myself at risk.’

‘By this time I was studying for a biomedical sciences degree so knew about the dangers of ultraviolet rays. Yet I didn’t think that would be enough to give me cancer.’

Dr Madan says that although BCCs rarely spread to other parts of the body, and the risk of dying from them is very low, they can still cause significant issues.

‘The problem is people tend to present late with them as they don’t cause bleeding and are slow growing and people ignore them,’ he says. 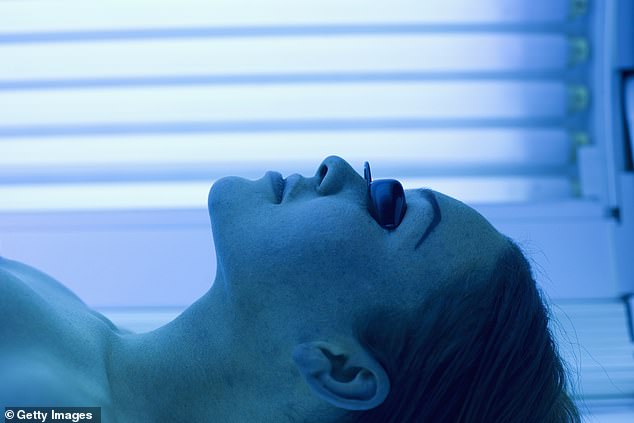 A review of studies by Stanford University in the U.S. in 2012 concluded that exposure to sunbeds under the age of 25 also raised the risk of developing a BCC by 40 per cent [File photo]

‘But if nothing is done, a BCC can grow around nerve fibres and, if on the face, invade the eye structures or go through bone, so removing them can be complicated and disfiguring as we often have to not only remove a tumour but a margin of healthy tissue around it.’

Luckily, Dr Madan was able to use Mohs micrographic surgery — a highly specialised technique which only a handful of surgeons are skilled in — where a layer of skin is first removed and studied in a laboratory on site during the procedure, so the surgeon can instantly identify the precise area where the cancer invaded.

This information is used to spare as much healthy tissue as possible. The procedure is repeated layer by layer until no cancer cells remain. It has a 99 per cent cure rate for a cancer not treated before and 94 per cent for a recurrent cancer.

Availability of Mohs micrographic surgery is limited, as only around 60 UK surgeons are currently trained in the technique. If the cancer is more advanced, then a combination of more extensive surgery and radiotherapy can be used to treat it.

‘Gemma was lucky that her BCC was on the side of her nose. It may have been potentially disfiguring if it was somewhere like her upper lip, eyelid, or top of her nose, as the surgery would have been more complicated and the scarring more visible,’ says Dr Madan.

‘Because of Gemma’s age she will need follow-up care for a number of years as once you have had one BCC, you are more likely to have another.’

Gemma is relieved she was able to have the BCC removed with minimal scarring and has vowed to avoid sunbeds in future and stay in the shade on holidays.

‘I want to warn younger people about the dangers of sunbeds and the fact that you don’t have to use them much at all to put yourself at risk,’ she says. ‘Any tan I get now will be a fake one out of a bottle.’

Dementia symptoms: Are you easily upset? It could be a sign of vascular dementia

Theresa May refuses to back ‘reckless’ internal market bill