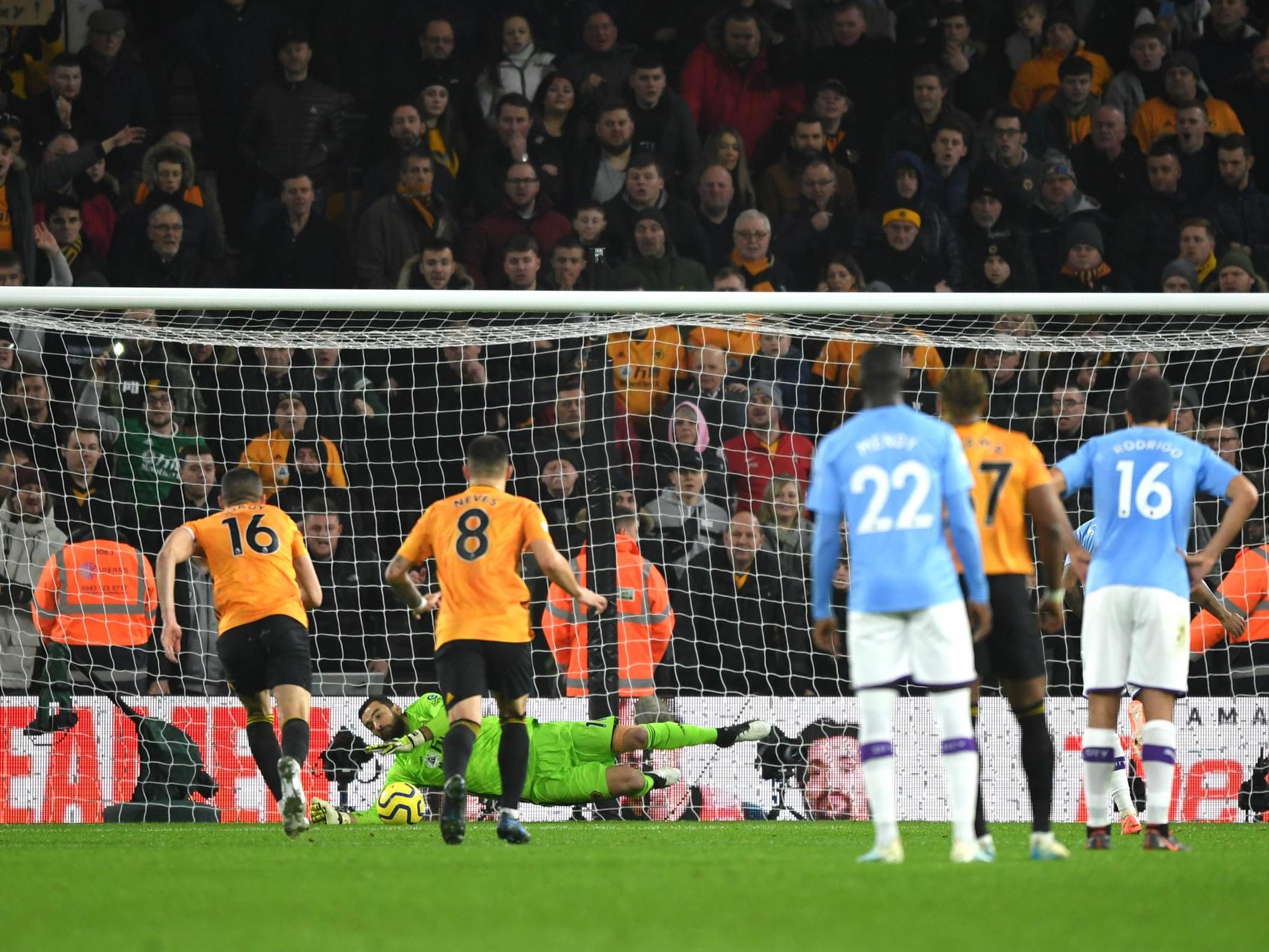 Manchester City take on Wolves this evening in what promises to be a pivotal game for both sides.

Pep Guardiola will be delighted his side overcame Leicester, not only narrowing the gap to the Foxes to just a point, but also moving to within 11 of Premier League leaders Liverpool as they bid to keep alive their dwindling title hopes.

Meanwhile, Nuno Espirito Santo, who vented his anger at having to face Liverpool 45 hours after this game, has positioned Wolves well in sixth, just five points behind fourth-placed Chelsea. Follow all the live action below:

What a half that was, with VAR once again rearing its ugly head to the detriment of the hosts. Wolves will feel very hard done by given the circumstances in which the penalty was first awarded and then retaken due to encroachment.

The decision to send off Ederson was no doubt correct but Wolves will be disappointed to find themselves a goal behind against 10 men. They’ve been threatening in spells but have lacked that final product. City, meanwhile, have kept the ball well when they’ve been in possession and, so far, have stood firm against Wolves’ front line. Will be interesting to see what the second half brings after temperatures have cooled.

Wolves are probing once again. A free-kick in City’s final third is swung in by the hosts, but Otamendi rises highest to nod away the danger. But his clearance doesn’t get very far, with Wolves back in possession and bearing down on their opponents.

Jimenez lets loose with a curling, thumping shot from outside the box. It arcs towards the top right corner but Bravo is on hand to deny the Wolves player. City continuing to hold firm.

Hand ball against Man City? Cries for a penalty go up around the stadium after Otamendi appears to handle the ball following a failed clearance from inside his box. But the replays show it came off Jimenez instead. The referee was right in his decision. On we go. Wolves pressing here. They’ve turned the screw.

Saiss catches De Bruyne late with a dangerous rake of his boot down the back of the Belgian’s leg. He collapses in a heap as the ref’s whistle blows. Wolves need to keep calm and composed if they’re going to get back in this match. Despite the earlier injustices, they can’t let their anger stop them from playing.

Traoré is continuing to prove a menace down the right wing as he once again charges past his opposite man before whipping in a curled cross from the white line. Bravo asserts himself, though, and nullifies the danger to stop any of Wolves’ players getting a head to the ball.

Chants of ‘F**k VAR’ ring out around the stadium as City surge forward again in numbers. They really shouldn’t be leading this one, but they’re nonetheless looking dangerous. The atmosphere is heating up…

What a farce this is proving to be! Sterling was made to retake his penalty after encroachment from Wolves’ players into the box. The forward’s effort was once again saved by Rui Patrício but he was quick to pounce on the rebound and subsequently find the back of the net. You hate to see it.

It’s a penalty to Man City!

Up steps Raheem Sterling – and it’s saved! Rui Patrício guesses correctly, diving to his right to palm the forward’s effort away.

We’ve got a nervous wait on hands at the moment as VAR reviews an incident between Mahrez and Dendoncker in the Wolves box. The defender appeared to clip the back heel of the Algerian, who went flying in the process as he attempted to get around his opposite man. No penalty was the original decision, but that could well be overturned…

Wolves with a corner on the right side. It’s sent to the near post, and it’s Jimenez who gets there first to nod on play to the back. Doherty springs forward near the byline to knock it back towards the centre of the goal-mouth, but Bravo holds steady to get two firm hands to the ball.

Claudio Bravo has come on to take charge between the sticks. Sergio Aguero is the player who’s been sacrificed.

As for João Moutinho’s subsequent free-kick, his effort sailed straight into the hands of the new goalkeeper.

A beautiful ball was sent over the top of the Man City defence, which Jota immediately gave chase to as he peeled away from his markers. Ederson, meanwhile, rushed from his line only to miss the bouncing ball outside his box, instead catching the Wolves man to send him tumbling to the turf. The ref was never in doubt about the card, showing the Brazilian red straight away. City down to 10-men!

RED CARD! Ederson is sent off after bringing down Jota outside of his box!

A nasty clash of heads here after Mendy and Dendoncker ended up charging into one another as they attempted to nod down a loose ball. They’re both on the turf, with a cluster of medical staff around them. Hopefully it’s nothing too serious.

First glimpse of a threat from Wolves as Traoré gets hold of play to the right of the City box and surges toward the byline. He’s moving a bit too quickly for his own good, though, and ends up overshooting the white line. Man City goalkick.

Man City trying their best to break down the hosts at the moment but they’re struggling to get beyond the half-way line. Wolves looking well-organised and structured in their positioning. A tentative and unassuming start so far…