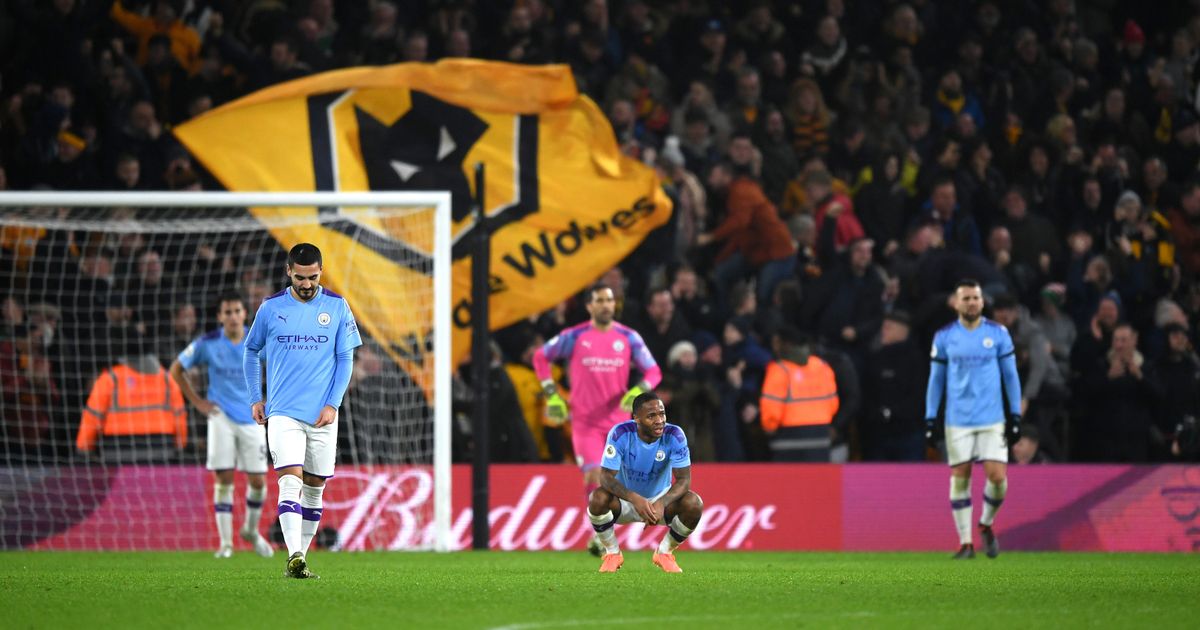 Just 24 hours after Liverpool moved 13 points clear with their destruction of Leicester City, Pep Guardiola’s men let slip a two-goal lead as they lost 3-2 at Wolves.

Raheem Sterling had put City in front with two goals, despite the 12th minute dismissal of goalkeeper Ederson.

But goals from Adama Traore Raul Jimenez, and a late winner from Matt Doherty gave the old gold a comeback victory that boosts their own top four hopes.

Ederson was shown red after rushing out of his penalty area and cleaning out Diogo Jota. But 13 minutes later City had the lead.

VAR awarded a penalty for a foul on Riyad Mahrez, and while Rui Patricio saved both Sterling’s initial spot-kick and his retake – given for encroachment by Conor Coady – the England star was in the right place to tap home the rebound.

Adama Traore struck a fierce response in the 55th minute to reduce the deficit however, and Nuno’s men would dominate from therein.

City defended for their lives, but a lapse from Benjamin Mendy in the 82nd minute saw Traore pinch possession, and he teed up Jimenez for the equaliser.

And in the final minute of normal time, Doherty tiptoed his way into the penalty area, before firing past Claudio Bravo to further enhance Liverpool’s advantage in the title race.

While Sergio Aguero has been absent with injury recently, Gabriel Jesus has performed admirably in his place.

But the Argentine’s return to the starting XI at Molineux, against an opponent Guardiola had labelled “incredible” and “one of the toughest” in the build up, came after the Brazilian was ruled out through injury.

Guardiola had seen Liverpool extend their lead at the top of the table on Thursday night to 14 points with a magnificent thrashing of Leicester .

As he sought to close the gap and keep the Champions in contention for a third successive title, losing his in-form forward was no doubt a blow.

However, being able to once more call upon City’s all-time record scorer would have been no doubt welcome.

Wolves destroyed City’s high line in their 2-0 win at the Etihad earlier this season. They scored twice, but had three clear one-on-one opportunities other than the pair slotted home by Adama Traore.

It’s all well and good pushing up to play offside when there’s pressure on the ball. But when there’s none, and you attempt to get upto halfway like Otamendi did as Jota span in behind, then you’re asking for trouble.

Wolves skipper Coady had one look, then another, then dropped a 50-yarder over the top for Jota to run clean through on goal – only to be clattered by an onrushing Ederson.

The Brazilian was dismissed, rightly, and tasked with replacing an outfielder to get Claudio Bravo onto the field, Guardiola selected Aguero.

City’s No.10 appeared to understand, but you can bet he won’t have been happy about it.

3. VAR, encroachment and the penalties

VAR is a mess. Referees should be allowed to go and check a monitor – as in the Champions League – we all know that.

Unfortunately, Mike Riley doesn’t like that system so the Premier League stands alone in not doing it. FIFA and UEFA aren’t happy about it, and you hope that, while it won’t change this season, it will next.

Anyway, the penalties. First, Leander Dendoncker did stand on Mahrez’s foot, and despite the Algerian’s theatrics it was the right decision.

Sterling was initially denied by Patricio, a fine save from the Portuguese. Unfortunately, Coady cleared the rebound and, as confirmed by the Premier League, a retake was ordered because he had encroached, having stepped through the ‘D’ early in his bid to get to the ball.

VAR can only penalise ‘encroachment by an attacker or defender who becomes directly involved in play if the penalty kick rebounds from the goalpost, crossbar or goalkeeper.’

It doesn’t matter that Bernardo Silva was the furthest man in the box and had also encroached, as he didn’t play the ball. Them’s the rules.

Sterling again stepped up, and while Patricio again denied him, the England forward – pushed through the middle in a 4-4-1 formation with City down to 10 – reacted first to poke home the rebound.

For the most part, the Belgian was largely quiet.

With City down a man, he couldn’t exert maximum influence on the game.

But still, in one sublime moment, his class shone through, flicking a delicate through pass between Wolves defenders and into Sterling’s path for his second goal.

However, De Bruyne was not happy at being subbed off at 2-0. He was replaced by Ilkay Gundogan and it ultimately cost City somewhat, with the German international failing to keep hold of the ball with the same conviction of his team-mate.

For much of the night, Man City did a good job against Adama Traore, Wolves’ outstanding player of the season.

Mendy and Bernardo Silva largely kept him in check.

But he continues to develop at a frightening rate and once more was too sharp for City.

He fired Wolves back into it with a stunning strike, before teeing up Jimenez for the equaliser.

He is now making a huge difference to his side, with goals, assists and his ability to fly past opponents.

6. Formations, thy name is Pep

City started with a 4-2-3-1 formation, with Rodri partnered at the base of midfield by Bernardo Silva and De Bruyne ahead as the No.10.

Down to 10, it became a 4-4-1, Bernardo moved out to the left, De Bruyne deeper and Sterling alone up top.

In the build up to half-time however, Wolves began dominating and having joy, so Guardiola changed again at the break.

On came young centre-back Eric Garcia, for Mahrez, and the Spaniard went straight into the heart of a back five, as City went 5-3-1.

On a tough night, it was a show of pragmatism from Guardiola, and also a sign of his respect for their opponents.

Wolves are still the only club in the Premier League not to have a VAR overturn in their favour since its inception.

Friday night’s decisions mean that Nuno’s side have seen four decisions go against them.

Indeed, when it comes to VAR and its game-changing antics, only Sheffield United have a worse overall record.