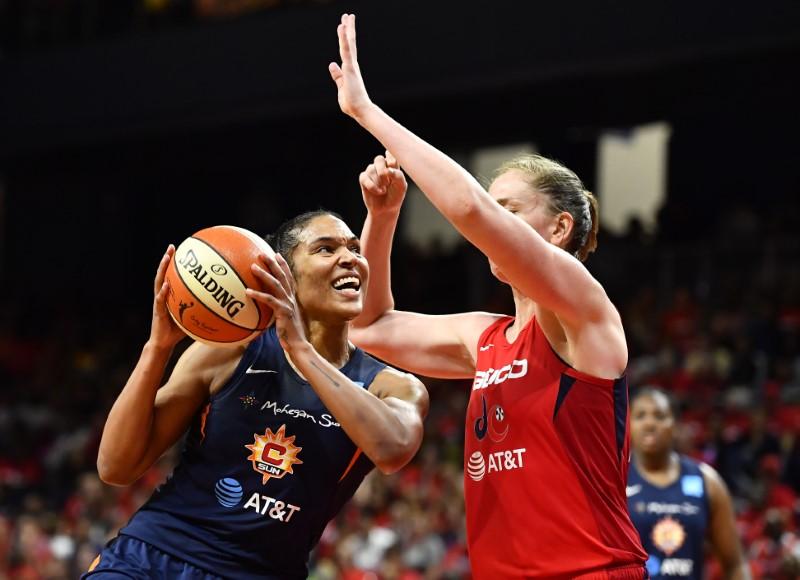 The Washington Mystics, playing without injured league MVP Elena Delle Donne for most of the game, fell to the visiting Connecticut Sun 99-87 in Game 2 of the WNBA Finals on Tuesday night.

The Sun got a combined 53 points and 30 rebounds from Jonquel Jones and Alyssa Thomas in leveling the best-of-five series at one game apiece.

Jones finished with 32 points and 18 rebounds, including nine offensive rebounds, a WNBA Finals record. It was the first 30-15 game in WNBA Finals history. Thomas had 21 points, 12 rebounds and six assists. Connecticut won the rebounding battle 41-27.

Delle Donne played only 3:28 of the game, all in the first quarter, before experiencing back spasms. Delle Donne, who had 22 points, 10 rebounds and five assists in Washington’s 95-86 win in Game 1 on Sunday, was 0 of 2 from the field in Tuesday’s game. She wound up with no points and one rebound.

ESPN reported that a team of physicians worked on Delle Donne’s back in the locker room but was unable to get her back on the court.

The series shifts to Connecticut for Game 3 on Sunday and Game 4 on Oct. 8. Game 5, if necessary, would be back in Washington on Oct. 10.

Emma Meesseman finished with 23 points on 10-of-17 shooting and had eight rebounds for Washington. Kristi Toliver contributed 13 points and seven assists, and Tianna Hawkins had 16 points and six rebounds.

Jones, who finished with 12 points in Game 1 while taking only eight shots, became more of a focus of Connecticut’s offense early.

By halftime, when the Sun led 56-46, Jones had 18 points on 7-of-13 shooting from the field. She also had 10 rebounds, which tied the WNBA Finals record for most rebounds in a half that was achieved seven times before.

Jones had no offensive rebounds in Game 1.

Connecticut also warmed up beyond the arc after making only 3 of 14 shots in the first game. At the half, the Sun were 4 of 8 from 3-point range. They finished 8 of 19 from long distance.

Washington went on a 12-2 run to cut Connecticut’s lead to 71-69 with 1:30 left in the third quarter on a layup by Aerial Powers on a pass from Toliver.

Jones was whistled for her fourth foul in that stretch, in which the Sun missed 10 straight field goals, and she was forced to sit the last 2:26 of the third.

Connecticut’s shooting drought ended with a pull-up jumper by Courtney Williams (14 points) to give the Sun a four-point edge heading to the fourth quarter.

Toliver tied the game for the first time since it was 4-4 in the first quarter with a bank shot that made it 76-76 with 8:14 left in regulation.

Jones returned and ignited a 6-0 run with a basket and two offensive rebounds to put Washington ahead 82-76 with 6:36 remaining. She picked up her fifth foul with 5:07 left trying to defend a driving shot by Hawkins, who made one of two free throws to cut the deficit to 84-81. Jones remained in the game to the end.

READ  Fed Cup 2020: Great Britain to face Slovakia away in qualifier for Finals