Will Smith has opened up about his marriage to Jada Pinkett-Smith and admits to sleeping with other people in a new, no-holds-barred interview.

The 53-year-old actor has been married to Scream 2 star Jada for the past 24 years, and says that their relationship has never been ‘conventional’.

In a new interview with GQ, Will discusses her admission to an ‘entanglement’ with August Alsina last year, and clarified that Jada wasn’t the only one to have extra-marital relations throughout their marriage.

In fact, he admits when he was younger, he had dreamed of having a harem of women travelling with him, naming Halle Berry as one of the actresses that he was attracted to.

However, it’s the ‘unconditional freedom and love’, as well as the honesty, they offer each other that makes their relationship work.

He told the magazine: “I don’t know where I saw it or some s**t as a teenager, but the idea of traveling with 20 women that I loved and took care of and all of that, it seemed like a really great idea.

Jada and Will with children together – Trey, Jaden and Willow

However, sessions with an intimacy coach allowed him to accept he can find women other than his wife attractive.

“It was okay to think Halle is fine. It doesn’t make me a bad person that I’m married and I think Halle is beautiful,” he said. “Whereas in my mind, in my Christian upbringing, even my thoughts were sins.”

While Will – who is set to appear in King Richard, a biopic based on the father of Venus and Serena Williams – felt that monogamy was the only way, Jada grew up around more liberal couples and had different thoughts on marriage.

While the couple ultimately decided to “mostly focus on monogamy”, Will said that wasn’t a defining part of their relationship. In fact, there was a period of their relationship where they won’t monogomous, but during the interview he declined to discuss whether that was still the case.

However, he did tell the interviewer: “We have given each other trust and freedom, with the belief that everybody has to find their own way. And marriage for us can’t be a prison.

See the full feature in the November issue of British GQ available via digital download and on newsstands October 1. 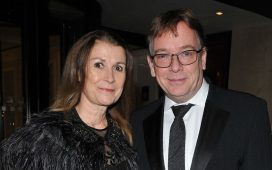