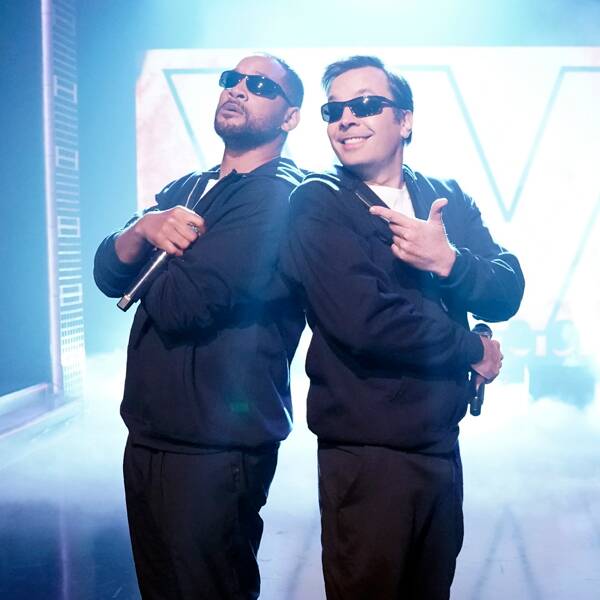 Well, this is a story all about how…

On Thursday, Will Smith grabbed the mic on The Tonight Show Starring Jimmy Fallon to rap about the history of his life, putting his spin on the show’s fan-favorite musical bit “The History of…” Joined by host Jimmy Fallon, the Bad Boys For Life star and the late night host donned matching black hoodies and white tees as they took viewers on a trip down memory lane—starting with Will’s humble music beginnings.

Kicking things off, Jimmy rapped, “You seen him in billboards / Starring in shows / But there’s a lot about him that you might not know.”

Then, The Fresh Prince of Bel Air star took over with a verse about his early rapping career. “Back in ’85 / I rocked the house till it turned to rubble / Every time I told y’all girls ain’t nothing but trouble / Jeff [Allen Townes]’s the DJ, I’m the rapper / You can call him Jazz, you can call me dapper / Then I was rappin’ just to make bus fare / Then I moved in with my Auntie and Uncle in Bel Air.”

Still on the topic of his breakout ‘90s show, Will made another hilarious Fresh Prince reference. He continued, “Six whole years I lived with the Banks / So if you can dance to Carlton, I’ll still give thanks.” Honoring his T.V. brother Alfonso Ribeiro, Will and Jimmy then showed off their dance moves by breaking out “The Carlton.“

As Will put it in his rap, “A real big star needs a real big screen,” and he proceeded to detail his start in the movie business. “What you gonna do when you hear the siren noise,” he began. “Me and Martin [Lawrence], a couple of Bad Boys / Independence Day, aliens on my turf / You invadin’ us, nah / Welcome to Earth.”

It wouldn’t be a rap about Will’s life without mentioning wife Jada Pinkett-Smith, who the star married in 1997. Standing in front of a red table, Jimmy said, “Any questions, you and she can have a Red Table Talk.”

After rapping about getting married, Will gave 1997’s Men in Black and his hit album Big Willie Style, which came out that same year, some love. Shortly after, kids Trey Smith, 27, Jaden Smith, 21,  and Willow Smith, 19, a sweet shout-out in his next verse.

“Started out a Prince, then became the Fresh Papi / ‘Cause Trey is the ace / Jaden’s a force / Willow came and told y’all, ‘Whip your hair back and forth.'”

Watch Will and Jimmy rap the history of Will Smith and recall the actor’s biggest moments in the video above!

(E! and NBC are both part of the NBCUniversal Family.)