Why Kid Cosmic Is About “People, Not Powers” 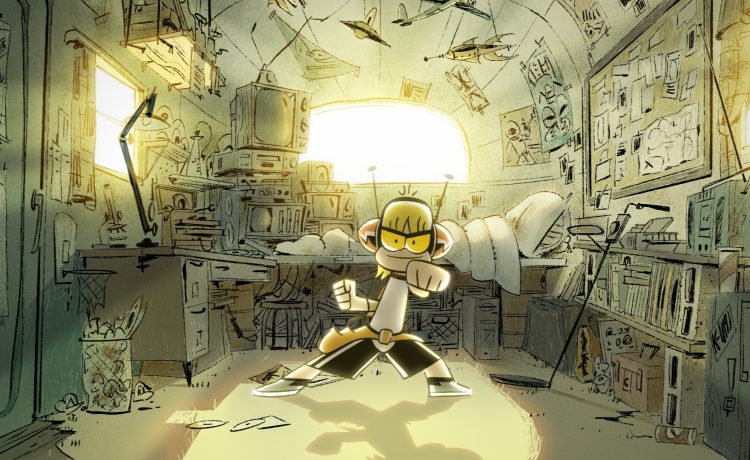 It’s not specifically New Mexico but sort of a generic rural southwest desert vibe. It could be New Mexico, it could be California, it could be Arizona, basically it’s a remote enough place where a spaceship could crash and not a lot of people would know about it. The other thing that is nice about the desert is that it forces you to tell a story about the characters because there is no surrounding environment for the characters to get distracted by, it’s a flat empty stage to play in. It’s also alone in the middle of nowhere, sort of like Earth is in the greater universe.

This is, relatively speaking, darker than most kids animated shows. It has pretty brutal alien deaths, and while they’re dispatched in unique ways (colorful blood, “de-rezzing” out of existence), they’re still a bit more intense then what’s usually out there. How was Netflix in responding to this? Do you feel there may be a kind of commentary here on how sensitized kids may be to the kind of violence they witness in superhero comics and films?

Again that’s the reality creeping in, even though there is fantastic stuff happening, Kid Cosmic doesn’t take place in a fantasy world. Danger exists, the stakes are high. This just increases Kid’s struggle and makes it more real. At the beginning, Netflix said this isn’t specifically a “kid’s show” it’s an all ages show that can be watched by young viewers, families, animation fans, anybody. So from their perspective, anything that you might see in a big summer superhero movie was fair game.

I want to talk about the Kid himself, who, to be blunt, is a lot to handle in the first few episodes. The approach seems to be that the Kid needs to learn a lesson about humility and what it means to be a “true hero.” But I’m also fascinated by his tragic backstory. It’s portrayed vaguely, but hints at his motivation. Do you feel that keeping the specifics of what happened to the Kid at arms’ length works to prop up the theme?

I wanted to tell a story about a real kid and kids at that age aren’t perfect. They make mistakes, they may be a bit intense or selfish and are hard to deal with sometimes. It’s part of growing up and maturing. Often heroes for young viewers are portrayed as aspirational. They always do and say the right things. I wanted Kid to be more realistic and relatable.