We often think of Halloween as a fun day filled with dressing up in costumes, haunted houses, making jack-o’-lanterns and eating loads of candy.

But it turns out the holiday happens to be one of the most hazardous of the year.

There were 4,500 Halloween-related injuries treated in emergency departments last year, according to the US Consumer Product Safety Commission.

Without fail, October 31 sees a high number of pumpkin carving injuries, falls from tripping over costumes and pedestrians being hit by cars.

But there are ways to protect yourself.

DailyMail.com spoke to the experts who have to deal with this year on year for their top tips on how to trick-or-treat in the safest way possible. 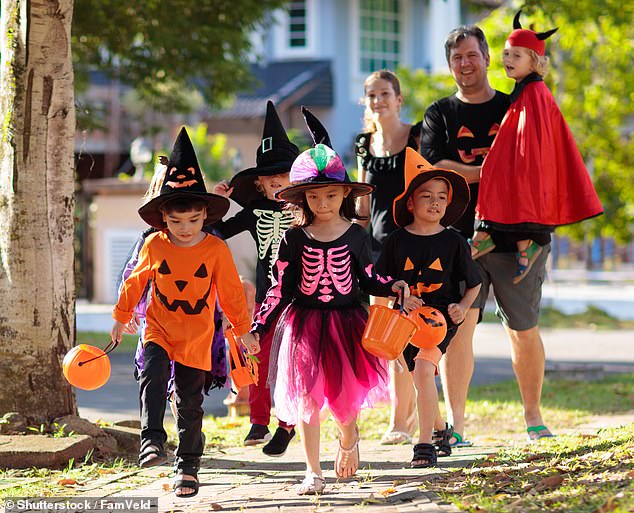 DailyMail.com reveals four Halloween health hazards that you should be aware of, and how you can avoid them to have a safe and happy holiday (file image)

1. PARENTS SHOULD BEWARE OF MARIJUANA-LACED CANDY

The fear of children being poisoned by Halloween candy allegedly began from a 1970 op-ed in The New York Times that warned parents of strangers potentially lacing sweet treats with drugs or hiding razor blades inside them, according to The Conversation.

However, Dr Joel Best, a professor of sociology and criminal justice at the University of Delaware, has been tracking cases of ‘Halloween sadism’ from 1958 to at least 2012.

He has yet to find an injury linked to strangers tampering with candy.

But parents have been warned by sheriff’s departments across the country, including Ohio and Pennsylvania, of marijuana edibles and THC-infused candies.

To keep children safe, authorities suggest throwing away any item that looks ‘home-made’, is packaged in a foil or clear wrapping, or doesn’t appear to be a candy sold in stores.

The US Food and Drug Administration also recommends parents go through candy to make sure they don’t see signs of tampering, such as pinholes or tears.

2. CHILDREN ARE MOST LIKELY TO BE HIT BY CARS ON HALLOWEEN

A study published last year by from the University of British Columbia in Canada found that Halloween is the most dangerous day of the year for cars to hit children.

Researchers found that children were 10 times more likely to be run over with the most dangerous times to be stuck occurring between 5pm and 8pm.

The team said one way to lower the number of fatalities is to make some neighborhoods are car-free.

They also suggest parents talk to their children about how to cross the street safely and supervise younger children while trick-or-treating.

Additionally, tips published on the American Automobile Association’s website include having parents make sure their children’s clothes are light in color to improve visibility and to carry some form of light – but not to flash it into the eyes of drivers. 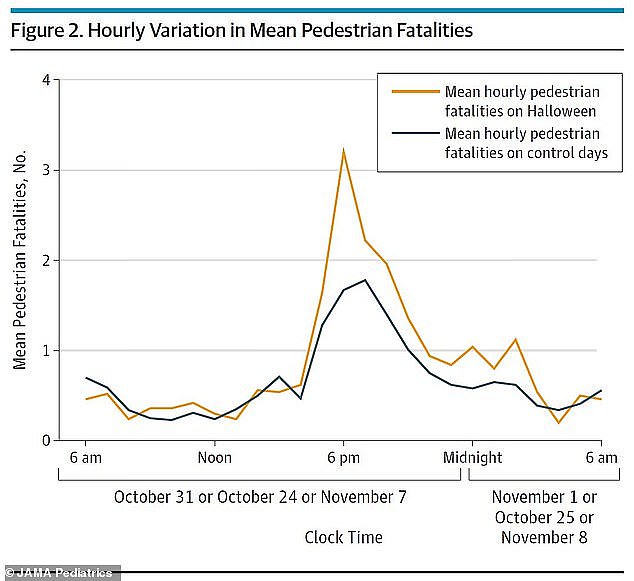 3. PUMPKIN CARVING CAUSES THE MOST INJURIES ON OCTOBER 31

Last year, 44 percent of all Halloween-related injuries were associated with carving jack-o’-lanterns, according to the CPSC.

That makes pumpkin carving the most dangerous activity related to the holiday.

But John Hoellwarth, public affairs officer, offered a few tips on how to prevent stab wounds or punctures.

‘What we recommend is supervising children during their pumpkin carving,’ he told Dailymail.com.

‘One of the best ways to do this is for the children to trace the pumpkin design with a knife and have the adult cut it out.’ 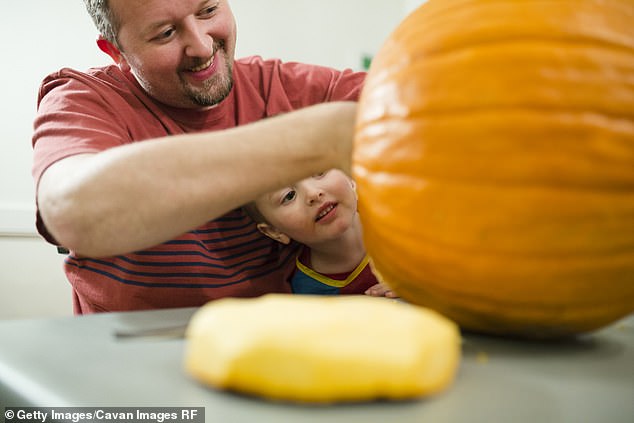 According to the US Consumer Product Safety Commission, 44% of all Halloween-related injuries were associated with carving jack-o’-lanterns last year (file image)

He also recommended not putting a real candle inside the pumpkin to light it up.

‘Often, you set that on a front porch and it can get kicked over accidentally and start a fire,’ Hoellwarth said.

‘Set it up with a synthetic light or a battery-operated light instead of an open flame.’

4. MAKE YOUR HOME A SAFE SPACE FOR TRICK-OR-TREATERS

Last year, 25 percent of Halloween injuries were due to falls while putting up decorations or tripping over costumes, according to the CPSC.

But Dr Stephanie Lee, a community pediatrician and spokesperson for the American Academy of Pediatrics (AAP) says the simple act of putting up lights will prevent such injuries.

‘When it comes to costumes around the home, make sure there’s reflective light to prevent tripping and falling,’ she said.

‘If you want flashing lights, some sort of black light so it’s visible if so [kids] can see where they’re growing 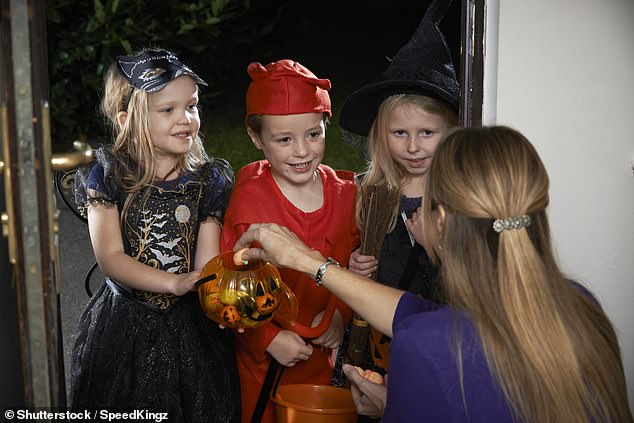 She also recommended that homeowners control pets so they do not accidentally jump on or bite a trick-or-treater.

According to the AAP, children between ages five and nine are among the most frequent victim of animal bites, with five percent of kids in this age range being bitten every year.

‘Have them chained if they’re outside or, if they’re inside, in a gated area or try to keep them upstairs so not to scare any children that they’re not used to,’ Dr Lee said.

‘Rabies are pretty rare in the states, but we want to keep that risk and risk of infection low.’

Coronavirus vaccine tracker: how close are we to a vaccine?

Coronavirus doctor's diary: How gardening could help in the fight against obesity

Type 2 diabetes: Five tips for diabetics to stay safe when taking a staycation