A guy named Monty Brogan is going to prison. He’s an Irish-American fireman’s kid from Brooklyn’s Bay Ridge neighborhood who got into a ritzy Manhattan private school, got himself mixed up with drugs and gangsters, got rich, and got busted. Now, this slick-looking player, with the sharp goatee and nice leather jacket, is getting ready to go upstate and do a seven-year bid. He’s got one last day to say goodbye: to his two best friends, a stock broker and a teacher; to his girlfriend, Naturelle; to his father; to Doyle, his loyal rescue dog; and to freedom. Monty could run, or alternately, take “the bullet train,” as someone calls putting a pistol in his mouth and pulling the trigger. But he’s planning on sucking it up, keeping his head down and paying for his sins.

Describe Spike Lee’s 25th Hour to people who’ve never seen or heard of the movie, and they’ll politely nod, maybe mention that it sounds like an intense drama. Follow that up with, “Also it’s not only the best film to tackle 9/11, it’s the only one that deals with the subject that still matters,” and they might give you a look that suggests they think you’ve completely lost it, assuming they haven’t slunk out of the room. There’s nothing in that above bare-bones synopsis to suggest that the story of a drug dealer who got caught has anything to do with what happened on September 11th, 2001.

And yet, as we look back on the worst terrorist attack on American soil that happened 20 years ago today, it’s Lee’s movie — and his movie alone — that’s arguably stood the test of time. It’s the one that we find ourselves going back to more than the disaster procedurals of United 93 and World Trade Center, the maudlin melodramas that often treated the event like mournful background Muzak (looking at you, Reign Over Me), even the docs that kept replaying the footage of the planes, the panic, the clouds of dust enveloping downtown after the dual collapses. A morality tale about paying for the consequences of your deeds, Lee’s take on David Benioff’s 1991 novel (the author and future Game of Thrones co-showrunner wrote the screenplay) could have left it at: Do the crime, do the time. But it’s a New York story through and through, and for Lee, that meant threading in what the city had gone through. Every movie is a documentary of the time in which it was made. This movie captures the vibe of the city in the aftermath of that horrific event in way that feels more compelling, more wounding (and wounded), more spot-on than any recreations of that day’s tragedy possibly could.

As Lee said when he and the film’s star, Edward Norton, appeared on the Charlie Rose Show right after the film’s release in 2003, he shared an agent with Benioff and was passed the script. He was prepping the film in the early summer of 2001 (though a New York Times piece reported it was actually filmed during that time), fashioning it as a fairly straightforward if busy drama. There’s a lot going on in 25th Hour, both in support of and on the sidelines of Brogan heading to jail: his interactions (and mistrust) of Naturelle, played by Rosario Dawson; the Mutt-and-Jeff interplay of Barry Pepper’s Wall Street cowboy and Philip Seymour Hoffman’s nebbishly educator, who argue about their attractive-bachelor eligibility stats and other assorted dudebro topics; Hoffman guiltily lusting after Anna Paquin’s tattooed-Lolita student; some Russian gangster stuff, some family stuff and a few flashbacks to Brogan getting grilled by the Feds. It’s got everything you’d expect in a Spike Lee joint, except his signature “floating” dolly shot … wait, no, sorry, there it is. 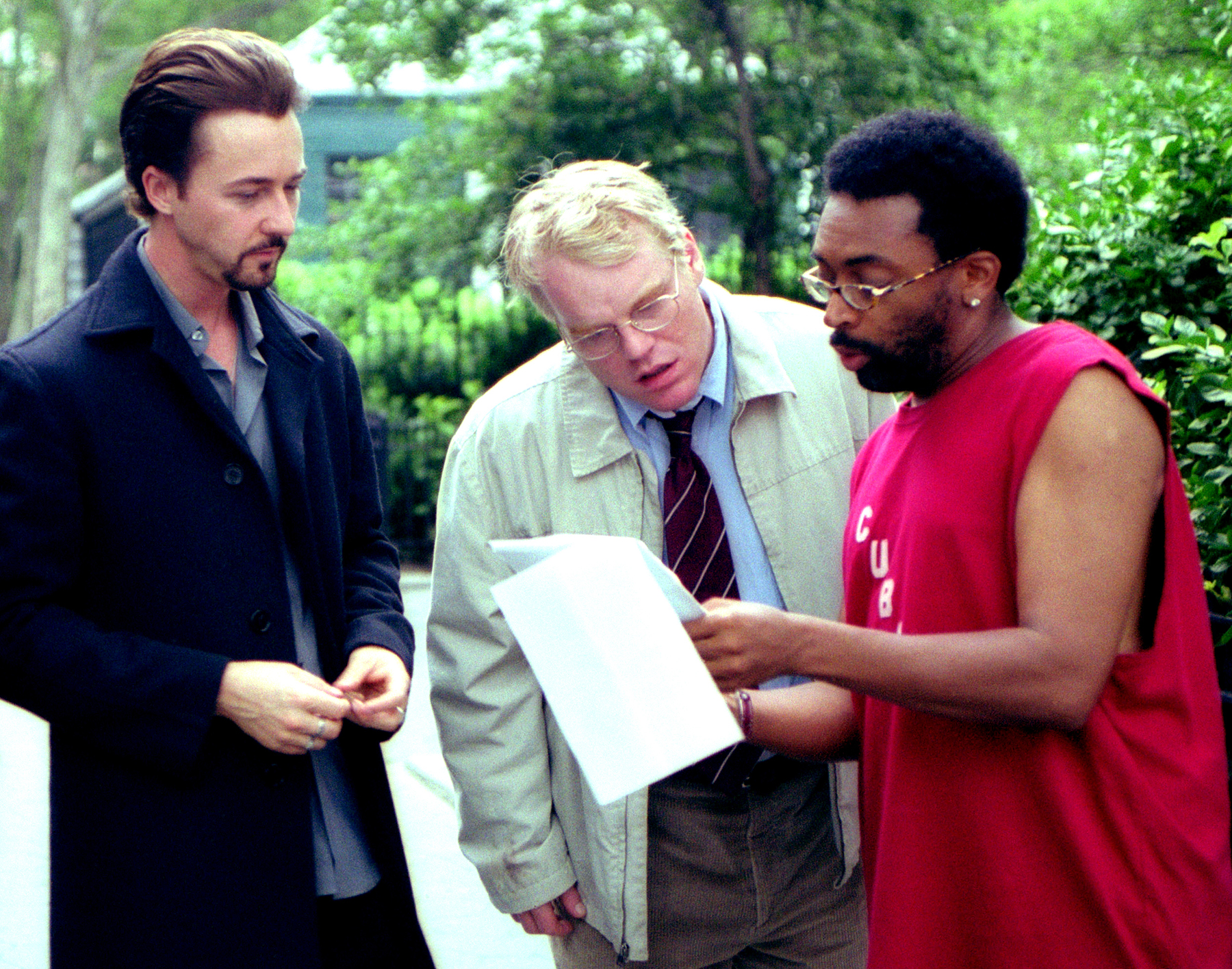 After 9/11, however, Lee felt like he couldn’t tell this story set in the city he was born and bred in, one he’s always been vocal about loving (which is one of his most New York qualities, and that’s saying a lot), and ignore that trauma New Yorkers had faced. “‘We were very careful how we were going to portray Sept. 11, because we know it’s still very painful and that it will always be very painful for those who lost people,” Mr. Lee said in that aforementioned NYT interview. ”But at the same time, we couldn’t stick our heads in the sand and pretend like it never happened.” So much of Hollywood was bending over backwards to digitally erase shots of the New York’s pre-9/11 skyline, to make sure marketing materials were scrubbed of twin-tower imagery, to keep folks from being reminded of what happened or simply not to make their movie feel instantly dated. There was a clear before and after now. The presence of the World Trade Center now instantly turned movies into historical dramas.

Lee went the other route — he leaned into the fact that 9/11 happened, and that it had left the city profoundly shaken, scarred, still healing years after the dust had cleared. It was a visceral experience to be sitting in a theater in 2003, only a few years removed from watching everything unfold on TV (or, for New Yorkers, in the streets where you lived), to cut to the “Tribute in Light” as the opening credits rolled over Terence Blachard’s elegiac score, turning the place where the towers once stood into dual beams of brightness shooting heavenward. When Brogan walked into his retired dad’s bar, there’s a memorial of fallen first responders on the wall. (It was, in fact, an actual memorial from a Staten Island firehouse who lost 11 men in the attack.) And, in a scene that still produces chills, a conversation in the stock broker’s apartment takes place by a window that overlooks Ground Zero. By the end of the sequence, he’s cut in several quick shots of workers in “the pit.” It’s the closest Lee gets to addressing it directly, yet the shadow of the day is everywhere in the film.

Even the best known, most “Spike” scene of 25th Hour somehow comments on the lingering effect of seeing your city turned into a catastrophic crime scene. Staring at his reflection in the mirror, Norton’s felon-to-be goes into a “fuck you” rant about every clichéd type you run into on any given NYC day, from basketball players that never pass the ball to Upper West Side matrons to any number of racially diverse diasporas. It’s a profane five minutes or so, highly reminiscent of the filmmaker’s mass trash-talking roundabout from Do the Right Thing. (The rant is in Benioff’s book; when Lee heard that the section had been “developed out” of the script, he insisted the screenwriter put it back in.)

There are some folks called out in this obscene virtuoso spiel, such as power-abusing cops and pedophile priests, that you’d never hope to deal with ever again. But the scene also plays as a love letter, in its own way, to everything that’s characterized New York for this out-of-luck dealer. These are the people and things he hates about New York. This is who and what he’ll fondly miss when those prison doors slam shut. Should you doubt the double meaning, Lee reprises many of these types as Norton drives off to his fate, waving as he passes by.

It was a scathing thing to watch back then. To see those “Fuck Yous” now, as 9/11 rolls around again and we think of everything that has happened since that beautiful day in New York turned ugly (and after many of us spent a year isolated from the things that drive us crazy about our fellow citydwellers), is to feel a battered affection, something familiar to all New Yorkers. But, as with so much in 25th Hour, it also makes you aware of the passage of time. This was how it felt to watch NYC go through this back then. This is how it feels to watch it happen again. Lee would directly make the connection between the distant past and recent past with his NYC Epicenters four-part docuseries, which directly digs into September 11th; it’s a massive achievement that will now and forever be undercut by the fact that he included a platform for 9/11 truthers to spread disproven theories. Applaud him for removing those moments before the last episode airs, sure…but remember that he included them in the first place.

And still, 25th Hour is proof that only someone of his caliber, a Bed-Stuy-Do-or-Die-Hard like him, could get the atmosphere of the city on ropes and the mend correctly. Not just authentic, but right. Watching it again after so many years, it’s still possible to feel the pang of those days after in so many scenes. What gets me now, however, is the climax, in which Brian Cox — at the midpoint between two monsters, Hannibal Lecter and Logan Roy — delivers a lone, winding “what if” speech. What would happen if Monty just hightailed it out west, changed his name, took a job, had a family, lived to be old and content. It’s a blissful alternate history for him, a great life that “came so close to never happening,” and actually will never happen at all. Seeing that again, it’s hard not to think of other alternate histories, in which those planes don’t go into the buildings, the towers don’t go down, the many people who perished that day and all the others lost in the wars to come after, live long, happy lives. As the film reminds us after that fantasy cuts back to Norton in the car, heading to jail, we have to live in reality. There’s no tragedy cosplay necessary in 25th Hour to conjure up all that terrible loss. Only tragedy.