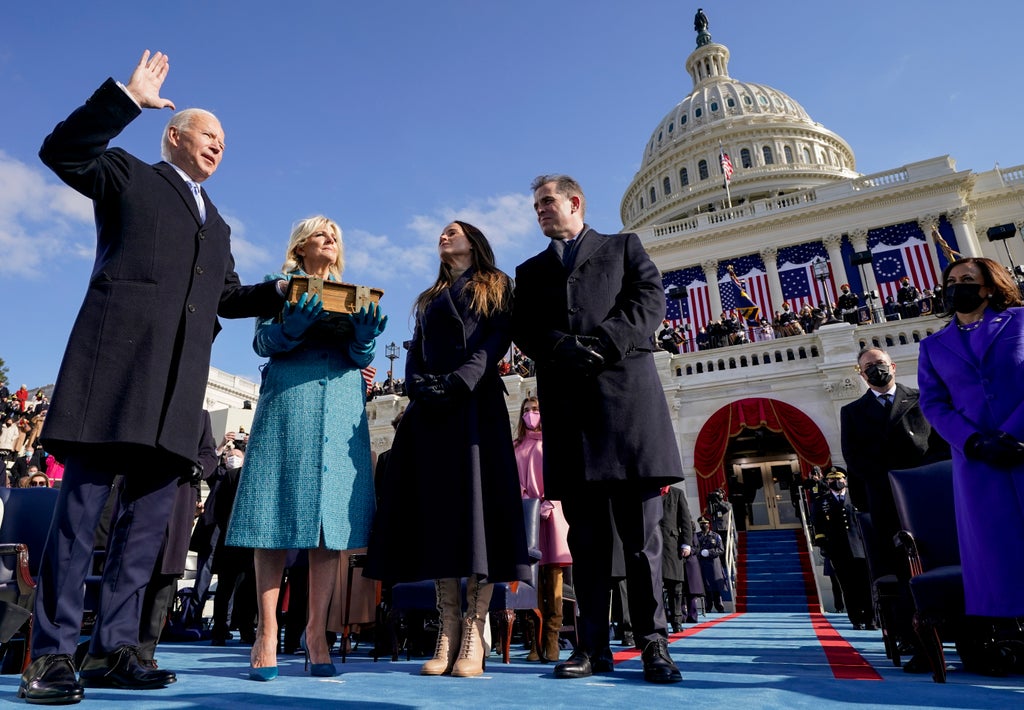 Mr Biden had three children with his first wife, Neilia Biden, whom he married in 1966.

In order of birth, they were Joseph Robinette III, known as Beau; Robert Hunter; and Naomi Christina, known as Amy.

On 18 December 1972 Neilia was driving with the three children to buy a Christmas tree when their car was hit by a tractor-trailer.

Both Neilia and Naomi Biden were pronounced dead on arrival at the hospital. Naomi was just over a year old at the time.

The two boys survived, but with serious injuries. Mr Biden was sworn into the Senate on 3 January 1973 at the hospital where his sons were recovering.

Senator Biden met future first lady Jill Tracy Jacobs on a blind date in 1975, and the pair were married in 1977. They had a daughter, Ashley Blazer, a few years later.

These are the stories of Beau, Hunter, and Ashley:

Beau Biden was born on 3 February 1969 in Wilmington, Delaware. He suffered multiple broken bones in the car accident and was hospitalised for several months afterward.

He graduated from the University of Pennsylvania in 1991 and then Syracuse University College of Law, before clerking for Judge Steven McAuliffe of the United States District Court of New Hampshire.

Between 1995 and 2004 he worked for the Department of Justice in Philadelphia, eventually becoming a federal prosecutor in the US Attorney’s Office.

In 2003 Beau joined the Delaware Army National Guard. He was deployed to Iraq in late 2008.

Beau ran for Attorney General of Delaware in 2006 and won, also winning re-election in 2010. During his time in Iraq, he continued in the role, through staff in Delaware.

In 2008 he memorably spoke at the Democratic National Convention after his father was nominated to be vice president, recalling the tragic car accident and his father’s committed parenting afterward.

Before winning his 2010 re-election, he was admitted to hospital and diagnosed with having had a mild stroke. In 2013 he was diagnosed with brain cancer after experiencing disorientation and weakness. A lesion was removed in surgery, and radiation and chemotherapy followed. His cancer went into remission.

Beau announced that he intended to run for Governor of Delaware in 2016, but on 20 May 2015 he was admitted to Walter Reed National Military Medical Center. His cancer had returned and he died there 10 days later aged 46.

He is buried at St Joseph’s on the Brandwine in Greenville, Delaware alongside his mother and sister. His father attends services at the church and often speaks of him with great affection at official events.

Vice president Kamala Harris, who knew Beau well, also spoke fondly of him, referring to him as “my dear friend” in a speech.

Hunter Biden was born on 4 February 1970. In the car crash he sustained injuries to his skull and, like his brother, received months of treatment to recover.

He graduated from Georgetown University in 1992 with a degree in history, before serving as a Jesuit volunteer at a church in Portland, Oregon where he met Kathleen Buhle, whom he married in 1993.

Returning to higher education, Hunter went to Georgetown University Law Centre for a year, before transferring to Yale Law School from which he graduated in 1996.

Hunter had three children with Kathleen: Naomi, named after his late sister; Finnegan, named after Joe’s mother Jean Finnegan; and Maisy, who went to school with Sasha Obama.

In 2018, his fourth child was born to Lunden Alexis Roberts in Arkansas, with a judge signing an order declaring Hunter’s paternity in early 2020.

He married South African filmmaker Melissa Cohen in May 2019 and had a son with her in March 2020.

Professionally, Hunter worked for MBNA America after graduation and then the Department of Commerce, focusing on ecommerce policy from 1998 to 2001.

In 2001 he co-founded the lobbying firm Oldaker, Biden & Belair, and in 2006 he and his uncle, James Biden, bought the international hedge fund Paradigm Global Advisors. He served as CEO for five years.

Also in 2006 he was appointed to the board of directors of Amtrak by President George W Bush, but left in 2009 when his father became vice president.

Since 2009, Hunter has been an investor and lobbyist with a focus on natural resource extraction and technology. He has also held the position of counsel at a law firm and was on the board of directors of the charity World Food Program USA.

Hunter has battled alcohol and drug addiction for many years, and a positive test for cocaine in 2013 saw a new career in the US Navy Reserve cut short after just a month.

His career as an investor has made him the focus of conspiracy theories regarding his father’s political career — specifically concerning his business activities in Ukraine with the firm Burisma, and in China regarding the companies BHR Partners, and Ye Jianming, and CEFC energy.

In 2019 Donald Trump was impeached by the Democrat-run Congress after it emerged he had pressured the Ukrainian president to try to dig up dirt on Hunter Biden and his father in exchange for continued military support and a visit to the White House. Mr Trump was acquitted by Republican allies in the Senate.

Hunter announced that he is under federal criminal investigation for his tax affairs shortly before his father became president.

Three weeks before the 2020 election, a laptop belonging to Hunter that had been abandoned at a repair shop resurfaced. Initial reports from The New York Post suggested that Hunter provided an “opportunity” for a Burisma advisor to meet with his father. Conservative media jumped on the report, speculating – even to this day – that Hunter’s laptop ties his father to corruption in Ukraine. Based on the available evidence it is unclear if Hunter did anything wrong.

In an interview with Piers Morgan, Mr Trump said the story “made a 17-point difference,” appearing to claim it as evidence of his baseless narrative that the results of the 2020 presidential election were stolen from him.

Ashley Biden was born on 8 June 1981 and is the only child from Joe’s marriage to Jill Biden.

A graduate of cultural anthropology from Tulane University, she pursued a career in social work, obtaining a master’s degree in the discipline from the University of Pennsylvania in 2010.

She spent 15 years as a social worker at the Delaware Department of Services for Children, Youth, and their Families. In 2012, Ashley became an associate director of the Delaware Centre for Justice, focusing on criminal justice reform in the state, eventually becoming executive director of the centre until 2019.

In 2012 she married Howard Krein, a plastic surgeon, introduced to her by her brother Beau, and in 2017 she launched an ethical fashion brand to raise funds to combat income and racial inequality in the US.

Ashley joined Hunter to introduce their father at the 2020 Democratic National Convention before he accepted the presidential nomination.