NewsGroove Uk
NewsGroove Uk > Politics > Which MPs are standing down at the election?
Politics

Which MPs are standing down at the election? 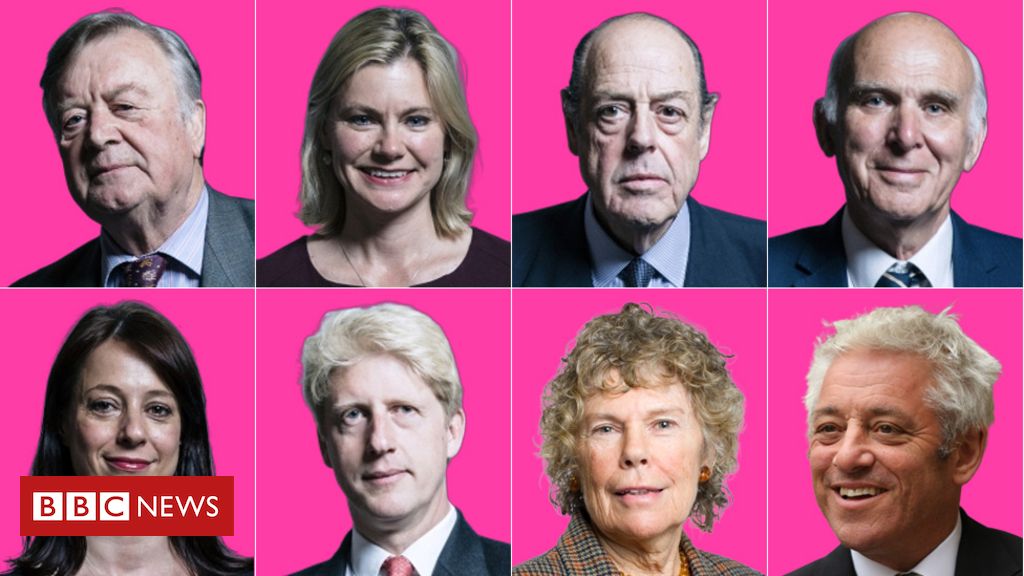 The general election date is set and most MPs are entering campaign mode. Others, however, are clearing out their desk for the last time.

The House of Commons will lose over 750 years of parliamentary experience with more than 50 incumbents preparing to stand down – and there may be more to come.

Here are the ones we know about so far:

Ken Clarke, is the longest serving MP in the House of Commons, known as the father of the house, having served his Rushcliffe constituency for almost half a century.

A long-time supporter of the UK’s membership of the EU, he was expelled from the Conservative Party by Boris Johnson, after he rebelled against the government over Brexit.

Sir Oliver Letwin, the former Conservative minister and West Dorset MP, who was recently at the forefront of Parliamentary attempts to delay Brexit.

One-time Conservative leadership candidate and walking enthusiast Rory Stewart (Penrith and the Border), who is focusing on trying to beat Sadiq Khan in next year’s London mayoral election, as an independent candidate.

Former Home, and Work and Pensions, Secretary Amber Rudd, MP for the ultra-marginal Hastings and Rye seat, who resigned from the cabinet and surrendered the Tory whip over Brexit in September. She was not among those who had the whip restored by the PM on Tuesday.

Guto Bebb (Aberconwy), another Brexit rebel kept out in the cold by Boris Johnson – and so unable to stand as a Conservative candidate.

Nicky Morgan (Loughborough), the current culture secretary, surprised Westminster watchers by announcing her departure, citing the “clear impact” on her family and “the other sacrifices involved in and the abuse for doing the job of a modern MP”.

Sir Nicholas Soames (Mid Sussex), grandson of wartime leader Sir Winston Churchill, who was among those kicked out of the party by Boris Johnson over his opposition to a no-deal Brexit.

He has now been welcomed back into the fold, but is standing down.

Former Defence Secretary Sir Michael Fallon who has been the MP for Sevenoaks since 1997 and before that MP for Darlington.

David Lidington (Aylesbury) de-facto deputy PM under Theresa May wants to spend more time with his family while he is “still in active and good health”.

Former miner – and former minister – who has been in Parliament for 33 years – Sir Patrick McLoughlin (Derbyshire Dales).

Dame Caroline Spelman (Meriden), who cited “the intensity of abuse arising out of Brexit” in her resignation statement.

Jo Johnson (Orpington), the PM’s brother, who resigned from the cabinet over Brexit.

Other Tory MPs leaving the green benches will be:

Of the Labour MPs who have announced their intention to step aside, a good number are either Brexiteers or against a second referendum.

Ex-shadow justice minister Gloria De Piero (Ashfield), who expressed concern over the “lack of tolerance for different viewpoints” within her party in her resignation speech.

Ann Clwyd (Cynon Valley), who at 82 is the oldest woman to sit in the House of Commons.

Other Labour MPs stepping down are:

Former coalition government minister Sir Norman Lamb (North Norfolk), who is leaving Westminster to focus on setting up a fund for people with mental health issues and learning disabilities.

Former Conservative and Change UK MP Heidi Allen (Cambridgeshire South), who only joined the Lib Dems a few weeks ago, said she had suffered “utterly dehumanising abuse” as an MP in a letter to her constituents announcing her future intentions.

In addition to being the House of Commons referee, former Conservative John Bercow is the MP for Buckingham, which he has represented since 1997.

Before he announced his decision to step down, the Conservative Party said it intended to break convention and run a candidate against him at the next election.

READ  Britain is a nimble speedboat with vaccines and EU a tanker, Brussels admits
Share on FacebookShare on TwitterShare on PinterestShare on Reddit
newsgrooveOctober 30, 2019