When is Debbie Dingle returning to Emmerdale? Actress Charley Webb is on maternity leave

EMMERDALE fans were left in tears on Tuesday night when Debbie Dingle said a heart-breaking goodbye to her mum, Charity.

Debs has left the village to heading up to Scotland where she’ll manage a garage Lisa Dingle left to her and Belle in her will.

In reality though, Emmerdale actress Charley Webb has headed off on maternity leave after giving birth to her third child with husband, Matthew Wolfenden.

But what we all want to know is when will she be back on screen? Let’s find out…

When is Debbie Dingle returning to Emmerdale?

Actress Charley Webb – who’s played the glam mechanic since 2002 – temporarily quit the ITV soap so she could enjoy maternity leave with her new baby who was born at the end of last month.

While it’s expected that Charley will return to work once her mat leave is over, in about a year, Debbie wasn’t making any promises about ever returning to the village when she left last night.

During an emotional heart-to-heart with mum Charity – Emma Atkins – Debs told her: “I can’t say if I will be back, otherwise there would be no point going if I could.”

Fans immediately panicked, worried that this was a final goodbye for Debbie, and flocked to Twitter to voice their concern.
One tweeted: “I hope Debbie comes back (followed by a crying emoji).”

READ  Nick Viall reveals he 'made out' with his 'first guy' and tongue was involved: 'I was a bit nervous'

Charley gave birth to her third child at the end of July 2019 and the actress took to Twitter to announce the happy news on July 29.

Where is The Great British Bake Off 2019 filmed and can I visit?

Here’s the lowdown on Noel Fielding, Bake Off host and Mighty Boosh star

Get to know Britain’s Got Talent dance group MerseyGirls

All about Issy Simpson, the 8-year-old who read Simon Cowell’s MIND on BGT

Posting a black and white picture of her newborn’s baby grow which had a Baby wolf; motif on it, she wrote: “BaByWoLf#3 has joined the crazy gang. We’re in a bubble of newborn’ness heaven.”

The couple also have sons Buster, nine, and Bowie, three, together, and announced they were expecting their third child together in February. 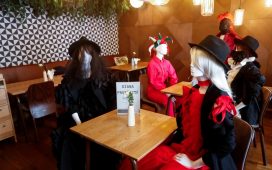 Coronavirus quarantine: 'We expect the vast majority to do the right thing' – Patel