What is Boris Johnson trying to achieve? 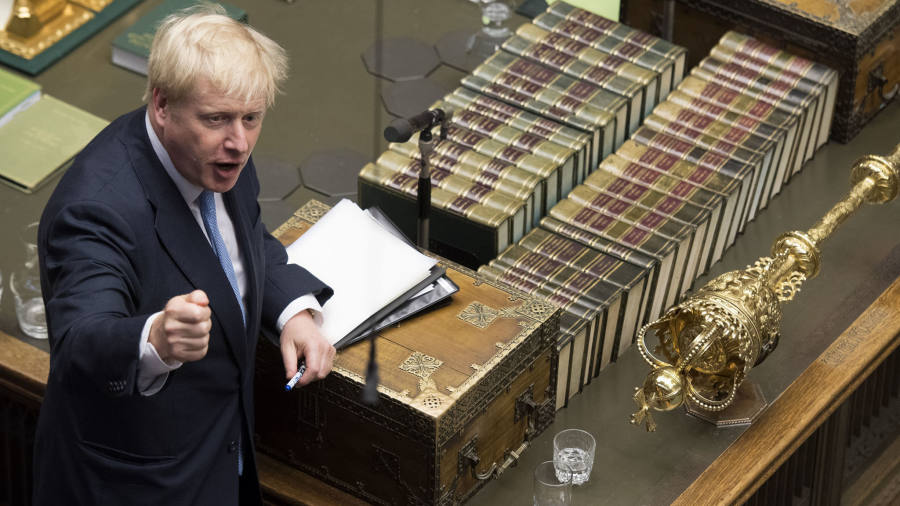 Boris Johnson’s chief adviser Dominic Cummings is a keen student of Sun Tzu, the ancient Chinese military strategist, who wrote in The Art of War that “supreme excellence consists in breaking the enemy’s resistance without fighting”.

The prime minister’s shock decision to ask the Queen to suspend parliament from the second week of September until October 14 fits with Mr Cummings’s belief that one should confuse and demoralise the enemy through “disorientating moves, feints, bluffs”.

Mr Johnson’s move is squarely aimed at preventing MPs from stopping a no-deal Brexit on October 31, given the prime minister insists the UK must leave the EU on that date, with or without an agreement.

What is Mr Johnson doing?

The Queen has approved the prime minister’s request to suspend — or prorogue — parliament for more than a month before she unveils the government’s new legislative programme in a Queen’s Speech on October 14.

MPs will return to Westminster after their summer break on Tuesday next week as planned, but parliament will then rise sometime between September 9 and 12 and not return until mid-October — little more than two weeks before the scheduled Brexit day of October 31.

Why is the prime minister making this move?

The official reason is that Mr Johnson, as head of a new government, wants to set out a “bold and ambitious” package of legislation in a Queen’s Speech. He cannot do this unless the current parliamentary session is ended through prorogation, and a new one started.

Mr Johnson argues that a Queen’s Speech is well overdue, and there is some truth in this. The last one was in 2017 after Theresa May’s bungled general election, making the current parliamentary session — at 340 days — the longest in almost 400 years.

The obvious underlying reason for Mr Johnson’s move is that he is using the device of a Queen’s Speech to close down parliament for a longer than usual period between two sessions so as to thwart MPs’ efforts to halt a no-deal Brexit on October 31.

John Bercow, the House of Commons Speaker, called Mr Johnson’s move a “constitutional outrage” on Wednesday, saying “the purpose of prorogation now would be to stop parliament debating Brexit and performing its duty in shaping a course for the country”.

But some constitutional experts said that, while Mr Johnson’s action might be politically outrageous, it does not represent a breach of precedent.

Parliament was expected to be in recess from the second week of September until October 7 in any event — the traditional break for the party conference season — and Mr Johnson would therefore argue he is hardly ripping up the rule book.

However the prorogation of parliament means that MPs cannot vote to sit through the conference season.

Maddy Thimont Jack of the Institute for Government, a think-tank, said if parliament did not want Westminster to be shut for a month it could still hold a vote of no confidence in Mr Johnson’s government next week and seek to bring him down.

Can the Queen or anyone else stop the suspension of parliament?

Ms Thimont Jack said as long as Mr Johnson has the confidence of the Commons, the Queen will take his advice on prorogation.

“If the prime minister advises her and he still has the confidence of the House, what would she do differently?” she asked.

Mr Johnson, advised by his legal affairs chief Nikki da Costa, has decided to close down Westminster using the prorogation route because MPs cannot vote to stop it.

What are the implications for MPs opposed to a no-deal Brexit?

By reducing the amount of parliamentary time between September 3 and October 31, Mr Johnson and Mr Cummings are forcing their opponents to make some difficult choices very quickly — daring them to try to bring down the government next week.

On Tuesday, Labour leader Jeremy Corbyn and other opposition MPs agreed to try to pass legislation when the Commons returns that would force Mr Johnson to ask the EU to delay Brexit beyond October 31.

Now there is precious little time to pass that bill and — crucially — even less to take corrective action if Mr Johnson finds a way of sidestepping such a law.

Dominic Grieve, former Tory attorney-general and one of the MPs against a no-deal Brexit, said Mr Johnson’s opponents may now decide to press the nuclear button and try to bring down the prime minister in a no-confidence vote next week.

Mr Johnson’s team are ready for such a showdown and believe the prime minister could win such a vote, given the reluctance of most Tory MPs to open the door to Number 10 to Mr Corbyn, even as head of a caretaker government that would seek to prevent a no-deal Brexit.

If Mr Johnson lost such a vote, Downing Street is planning a general election in early November in which the prime minister would seek a new mandate for Brexit.

The Brexit saga is building to a crescendo in the second half of October, notably via a summit of EU leaders on October 17-18.

The prime minister is determined that he should arrive in Brussels for that meeting — where he will seek a revised version of Mrs May’s Brexit deal — without having his hands tied in advance by parliament.

If Mr Johnson secures a deal, MPs would then have less than two weeks to pass a EU withdrawal bill at breakneck speed.

Should he fail, and proceeds instead with a plan for a no-deal Brexit, MPs could have one final chance to stop Mr Johnson in a no-confidence vote.

But that would require MPs from a range of parties to unite around an alternative prime minister, and Mr Johnson might refuse to resign or to recommend to the Queen that she should call an alternative leader to form a new government.

Constitutional chaos could reign and the Queen might be dragged into the Brexit morass.

MPs return to the House of Commons after their summer break. Mr Johnson’s opponents could legislate to stop a no-deal Brexit on October 31 or move a vote of no confidence to try to topple his government

EU leaders’ summit in Brussels. The moment when it becomes clear if Mr Johnson intends to take Britain out of the EU with a deal or no deal

Mr Johnson promises MPs votes on Brexit strategy. Time is running out for MPs to vote down the government if a no-deal Brexit is imminent

Downing Street is eyeing this date for a possible “people versus parliament” general election, if MPs succeed in stopping Brexit