What is a Narwhal after 5-foot whale tusk used against London Bridge terrorist? 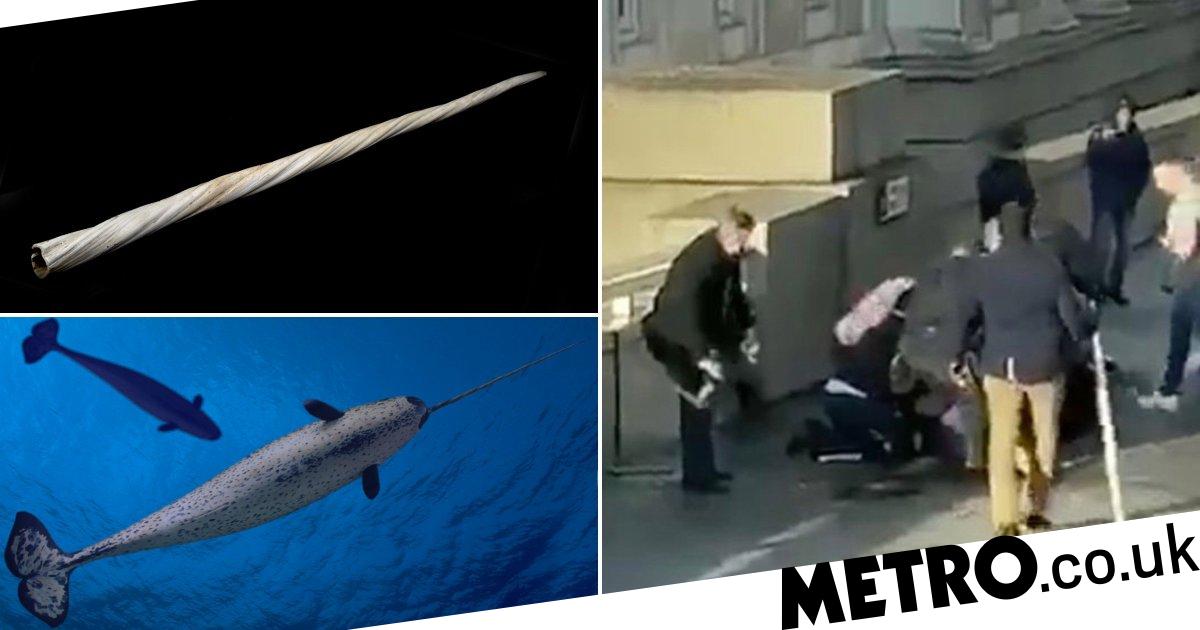 Of all the possible weapons to be considered useful against terrorists, a Narwhal tusk is perhaps the most unlikely.

However one man, who has been identified by The Times as a Polish chef named Łukasz, heroically brandished what looked to be a Narwhal tusk and ran at the London Bridge attacker with other bystanders as the convicted terrorist threatened to detonate a device which we now know was a hoax.

As Łukasz bravely wielded the tusk, another person armed themselves with a fire extinguisher and chased down knife-wielding terrorist Usman Khan – who killed two people before he was shot dead by police on Friday afternoon.

Since Narwhal tusks are not exactly household items, here’s some information about them and the animals they come from.

What is a Narwhal?

A Narwhal, or Narwhale as it is sometimes known, is a whale which calls Arctic waters around Canada, Russia and Greenland its home and can live up to 50 years.

Like many other Arctic animals, they are at risk due to climate change.

According to National Geographic, Narwhal tusks used to be sold to the unsuspecting as unicorn horns back in the middle ages, and doctors used to believe that they had healing properties such as the ability to cure the plague.

This helped make Narwhal tusks worth ten times their weight in gold back then.

While a Narwhal tusk might look a lot like a spiralled unicorn horn, it’s actually the whale’s left front canine tooth protruding from the lip.

While a Narwhal tusk was used as a weapon against the terror attacker on London Bridge, in the wild, Narwhals have never been seen using their formidable-looking tooths to fight each other.

While scientists believe the main function of the Narwhal tusk is likely related to sexual selection, drone footage captured in 2017 provided fresh insights into the tusk is for.

The video showed Narwhals hitting and stunning fish with their tusks before eating them.

David Miller, president and CEO of WWF Canada, said: ‘This footage, while also stunning to watch, will play a significant role in the future of Narwhal conservation.

‘As the Arctic warms and development pressure increases, it will be important to understand how Narwhal are using their habitat during their annual migration.

‘With this information in hand, we can work to minimise the effects of human activities on Narwhal. More research needs to be conducted to determine how they behave across their range, including the identification of calving and rearing areas.

‘WWF-Canada is looking forward to partnering with Fisheries and Oceans Canada again this year on Narwhal research in order to further our understanding of these mysterious animals.’

READ  The secret life of microbes: Molecules in a deep-sea symbiosis
Share on FacebookShare on TwitterShare on PinterestShare on Reddit
newsgrooveNovember 30, 2019