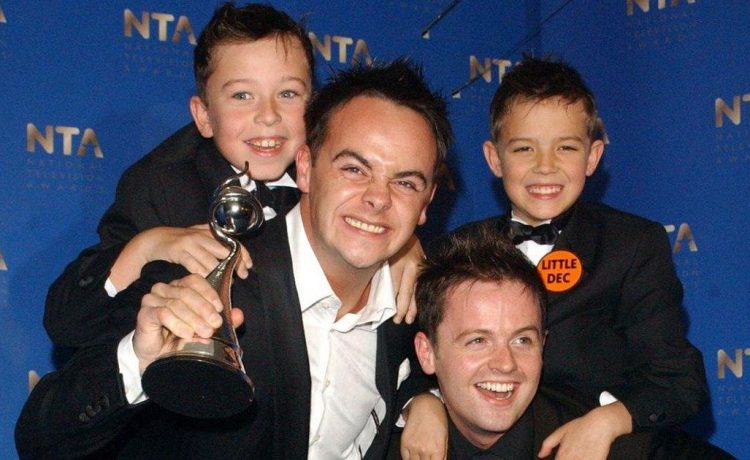 They provided lots of entertainment mimicking Ant and Dec on Saturday Night Takeaway, but whatever happened to Little Ant and Dec?

Miniature versions of the Geordie duo were catapulted on to the show to make the nation laugh back in 2003, but many have often wondered where the pair are now.

Many people even thought the little double act could actually be the next big thing but that wasn’t quite the case.

Original duo James Pallister and Dylan McKenna-Redshaw first made it on to our screens in 2003 with the hilarious mini-me boys causing fun chaos in the studio.

The boys had the nation in stitches of laughter with their innocent interviews with celebrities, powerful politicians and famous models.

Will Smith wasn’t best pleased with them for jokingly making him wait over an hour while they mucked around in the swimming pool ahead of the Venice Film Festival.

Other Hollywood stars also fell foul of the terrible twosome, including Angelina Jolie, and they started giggling when meeting Robert De Niro.

They dressed Katie Price up in a fat suit and a bald cap, got Ewan McGregor to teach them how to play the bagpipes and made Hugh Grant wear a pair of massive ears.

On a shopping trip with Victoria Beckham they cheekily tried to sign son Brooklyn up for their beloved football club Newcastle United.

Then they went one step further by trying to dupe Golden balls himself, David Beckham, into playing for their home team.

They got off the Saturday Night Takeaway train after five series, going back to their normal lives at school.

When the segment was brought back in 2013, James and Dylan had been replaced by a new pair.

Bosses decided that the original Little Ant and Dec were too old to carry on, which made a lot of sense as they were nearing their 20s.

There was another big reason they would no longer work in the roles, as they had grown a lot taller than Ant and Dec.

Unsurprisingly, they look very different now and have ditched their trademark Ant and Dec hairstyles.

Although they have still got those cheeky grins that left viewers and celebrities in stitches.

Neither of the pair has moved away from the North East – with James going on to work as a vehicle technician for BMW according to his Facebook page.

Dylan even snapped himself enjoying a beer with the actual Ant and Dec during a boozy reunion in 2013.

The lads did return to Saturday Night Takeaway to meet their replacements on the show.

Youngsters Neil Overend and Haydn Reid took over from longstanding pair during series 10.

In keeping up with tradition, they had some unforgettable encounters with a host of celebrities.

They beat Jennifer Lawrence in an arm wrestle, then blindfolded the actress and asked her to eat random items of food they had placed in front of her.

The miniature doppelgangers also put footballing legend Wayne Rooney through his paces on the pitch. and had a tea party with Scarlett Johansson and Samuel L Jackson.

They even unleashed their unique interview style on Boris Johnson, quizzing him on the important topics including not brushing his hair, his lack of typical Mayor attire and testing his London slang.

Once again, the same issue arose as show bosses decided the boys had “outgrown their role”.

Like their predecessors, they were also in danger of eclipsing the real Ant and Dec in the height stakes.

“Little Ant and Dec have outgrown the role, quite literally, and as such won’t be returning to the show this year,” a source told the Daily Star.

“Little Dec has his SATs next year and Little Ant is moving to high school so it felt like the right time for them to move on and focus on their studies.”

They are now too told to return for sketches and interviews, but the pair are frequent visitors to the Saturday Night Takeaway studio.

“They sometimes come down with their families,” Dec told Digital Spy this week.

“They’ll come down to a show every year. But we didn’t see them last year. And we won’t see them this year because we won’t have anybody at the studio.

“We haven’t seen them for a little while. They normally come down to take in a show. That’s the one that makes us feel really old!”

The duo also admitted that height was an issue with both versions of their little lookalikes.

“We haven’t seen the second Littles for a little while. It’ll be nice to see them when we can get them back to the studio.”

However, this might not be the last time we see a version of Little Ant and Dec on out screens.

The Geordie duo are not opposed to finding more lookalikes at some point in the future.

“The good thing is, with something like that, in the future we might want to do it again,” Ant teased.

“We might search again for two new Littles and do the item again. And we might try it again with two new ones.”