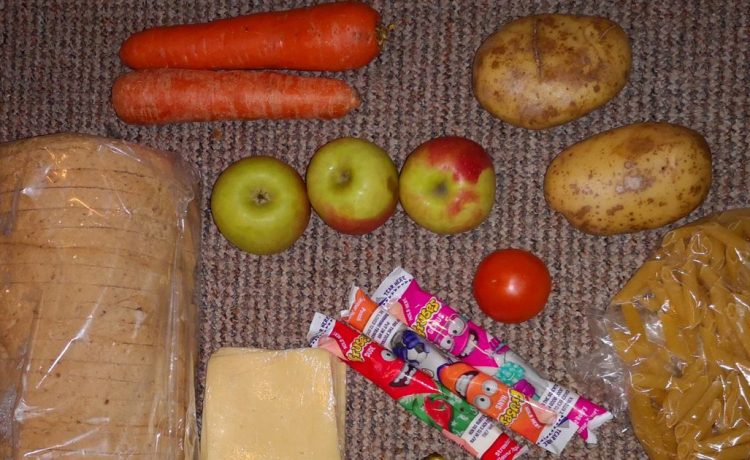 A meagre school food pack dubbed “disgraceful” by Boris Johnson was actually based on his own government’s guidance, Labour claimed today.

Keir Starmer pointed out similarities between an image which went viral yesterday and guidance drawn up by the Department for Education.

The “general principles” for food parcels did name several items that weren’t in the package received by Twitter user @Roadsidemum.

They were a cucumber, tin of sweetcorn, meat, milk, and more tomatoes. But the mum’s pack did also have pasta, Soreen and carrots which were not listed in the guidance.

Private firm Chartwells has apologised and admitted the so-called “hamper” was not up to standard as parents sent dozens of similarly shocking images to the Mirror.

Asked if he’d be happy feeding his children with them, Boris Johnson told MPs: “I don’t think anybody in this House is happy with the disgraceful images that we’ve seen of the food parcels that have been offered.”

The PM, who spoke to food poverty campaigner and footballer Marcus Rashford today, added: “They’re appalling, they’re an insult to the families that have received them.”

But Sir Keir said the Prime Minister was deflecting blame onto a private firm – when really he should look at government rules.

He told PMQs : “I’ve checked the Government guidance on free school meals, published by the Department for Education.

“I’ve got it here, it sets out example parcels for one child for five days.

“The only difference I can see in this list and what the Prime Minister has described as disgraceful is a tin of sweetcorn, a packet of ham and a bottle of milk.

“So, he blames others but this is on his watch. The truth is families come last under this Government, whether it’s exams, free school meals or childcare.”

Sir Keir urged Boris Johnson to take down the guidance by the close of play on Wednesday.

A No10 source said the guidance was “selectively quoted” by Sir Keir, and insisted the parcel received by @Roadsidemum “did not nearly meet the DFE requirements.”

To let you judge for yourself, we have posted the full guidance the full contents of the food pack side-by-side below.

Last night Chartwells said it would reimburse schools for the cost of inadequate parcels.

The firm said that contrary to earlier reports, the pack received by @Roadsidemum was for five days of lunches not ten.

Boris Johnson also told MPs: “I’m grateful to Marcus Rashford, who highlighted the issue and is doing quite an effective job by comparison to (Sir Keir Starmer) in holding the Government to account on these issues.

“The company in question has rightly apologised and agreed to reimburse.

“It’s because we want to see our kids properly fed throughout this very difficult pandemic that we’ve massively increased the value of what we’re providing.”

How school meal bag matched up to government’s own guidance

How it was the same…

WHAT GUIDELINES SAY: 2 baking potatoes. WHAT MUM GOT: 2 medium-sized potatoes.

How it was different…

WHAT GUIDELINES SAY: 1 cucumber. WHAT MUM GOT: No cucumber.

WHAT GUIDELINES SAY: 1 standard tin sweetcorn in water. WHAT MUM GOT: No sweetcorn.

WHAT GUIDELINES SAY : 1 litre / 2 pints semi-skimmed milk. WHAT MUM GOT: No milk.

WHAT GUIDELINES SAY: 2 items from the following: 1 pack sliced cooked meat (e.g. chicken, ham or vegetarian alternative) or 1 tin meat or 1 tin tuna in water or 6 eggs. WHAT MUM GOT: None of the above.

WHAT GUIDELINES SAY: 3 large tomatoes or 1 pack of cherry tomatoes. WHAT MUM GOT: 1 medium-sized tomato.

HOWEVER, mum also got 2 packets of Soreen, 1 pack of dried pasta, and two carrots, which were not in the guidance.