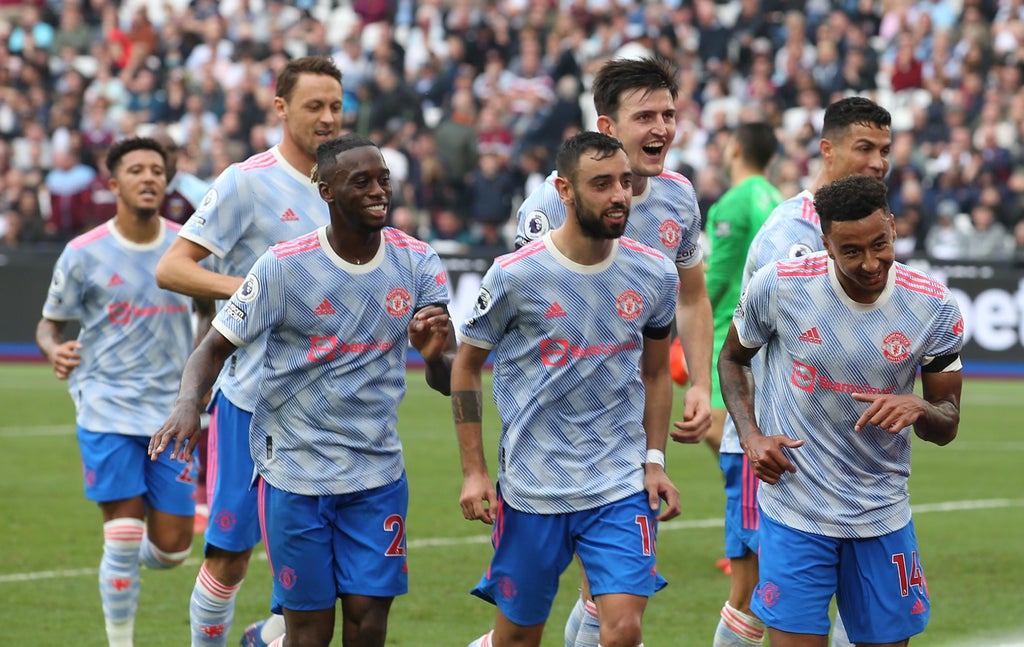 Mark Noble came off the bench only to miss a stoppage-time penalty as Manchester United snatched a dramatic 2-1 victory at the London Stadium.

Club captain Noble, West Ham’s Mr Reliable from the spot, was sent on by manager David Moyes to take the penalty after Luke Shaw handled in the area.

The long-serving midfielder, who retires at the end of the season, had not missed a spot-kick since December 2016, but he was denied a sentimental winner by United goalkeeper David De Gea.

It was a hugely dramatic end to a thrilling match which saw Jesse Lingard return to haunt the club for whom he starred on loan last season.

In a bitter blow for West Ham and David Moyes, who tried to re-sign Lingard over the summer, the England forward curled in what turned out to be the winner two minutes from time.

Cristiano Ronaldo had earlier scored his fourth goal in three matches since returning to United, cancelling out Said Benrahma’s deflected opener for the hosts.

Defeat was tough on West Ham, who showed no signs of fatigue from their Thursday night exertions in Europe as they went at United from the off.

Benrahma robbed Harry Maguire in the area and pulled the ball back for Jarrod Bowen 10 yards out, but his shot lacked power and was blocked by Aaron Wan-Bissaka.

Moments later a glorious cross-field move from the Hammers culminated in another chance for Bowen, whose deflected shot was kept out by the boot of De Gea, with Tomas Soucek firing the rebound over.

Ronaldo’s first glimpse of goal came midway through the first half, with a couple of stepovers gaining him a yard on Vladimir Coufal before shooting straight at Lukasz Fabianski.

United seemed to have weathered the early storm and almost took the lead through Bruno Fernandes, Fabianski getting the smallest of touches to tip his effort on to a post.

But moments later West Ham went ahead when Benrahma’s shot from the edge of the area took a huge deflection off Raphael Varane to wrongfoot De Gea and roll into the net.

The lead lasted only four minutes before Ronaldo struck, guiding a Fernandes cross into the chest of Fabianski and reacting quickest to tuck in the rebound.

Fabianski got down well to deny Ronaldo a second before Nikola Vlasic skied a chance for the Hammers as a breathless first half came to an end.

West Ham had a major let-off at the start of the second when a wayward pass from Pablo Fornals allowed Fernandes to slip Ronaldo in, but he was denied by Fabianski.

Ronaldo felt he should have had a penalty when he went down under Coufal’s challenge in the area, but referee Martin Atkinson thought otherwise.

The Portugal star was also denied by a timely block from the impressive Kurt Zouma as he looked to get on the end of another Fernandes cross.

Lingard came on as a 73rd-minute substitute and 15 minutes later found the top corner with a fine curler.

When Shaw handled Andriy Yarmolenko’s cross to concede a VAR-awarded penalty the script was written for Noble, but De Gea tore it up with a diving save to secure the points.

6 mins: Spurs win a free kick just outside the Chelsea penalty area and it’s prime territory for Harry Kane. He does take the set piece and drills it into Mateo Kovacic. The ball bounces off the Chelsea midfielder and goes behind for a corner that Chelsea then deal with.

3 mins: Chelsea are put under pressure early on as Son Heung-min gets free on the left side. His cross is sent across the box and gets taken up at the back post. A flick back into the middle is knocked on by Giovani Lo Celso and almost reaches Harry Kane only for Andreas Christensen to send it out for a corner.

Kick off: There’s a minute’s applause in tribute of the great Jimmy Greaves, formerly of both Tottenham and Chelsea. Chelsea kick off the game with a long ball up to Kai Havertz. He brings it down and spins towards goal. A pass comes in to Romelu Lukuku but he’s flagged offside.

Both sides make their way out of the tunnel at the Tottenham Hotspur stadium. Chelsea can move level with Liverpool and Manchester United if they win tonight.

Tottenham would jump into the top four with a win.

There are no shortcuts in football management. No Konami code to bash to get ahead of the competition. For a new manager, the process of developing an understanding of the players at their disposal and getting fans onside with their style of play takes time, even with the weekend-to-midweek programme at the top-level. The most restrictive factor is that patience is a scarce commodity.

There are, however, “accelerators”, if you can call them that. These are marquee fixtures where positive results early in your tenure grant you an invaluable combination of leeway and belief. This weekend, Nuno Espirito Santo has his second of three within his first six league matches as Tottenham Hotspur manager.

Chelsea have only conceded one goal in the Premier League so far this season, their lowest total at this stage for 11 years.

They could win six successive London derbies away from home for the first time in their history. It has only been done by one other top-flight club: Arsenal, between 1988-1989 and again in 2013-2014.

The Blues’ defeat at Aston Villa in May is their only loss in 11 Premier League away matches under Thomas Tuchel.

Tottenham are vying to open their campaign with three wins at home for the first time since 2002 and they could equal the club record of 12 points after five Premier League fixtures.

If they keep a clean sheet Spurs will have kept a shutout in each of their opening three home matches of a league campaign for the first time.

They’re in good form at home too having won eight of their last 10 league games at the Tottenham Hotspur Stadium, keeping six clean sheets.

Tottenham have conceded a club record 103 Premier League goals against Chelsea and they have won only seven of the 58 Premier League meetings between the sides with 20 draws and 31 defeats.

Chelsea can win three successive Premier League matches versus Spurs for the first time since 2005 if they take all three points tonight.

Spurs’ record goalscorer, with 266 goals to his name from 379 appearances, Greaves also hit 44 goals for the Three Lions from 57 caps and helped his country win the World Cup in 1966.

Tonight’s clash between Tottenham and Chelsea will be the world’s first net-zero football match.

As hosts Tottenham have encouraged fans to travel sustainably, choose plant-based food options and recycle in the stadium as they aim to highlight the importance of considering customer interactions in sustainability strategies.

The project has been called #GameZero and also aims to educate football fans on the role of sport in addressing climate change.