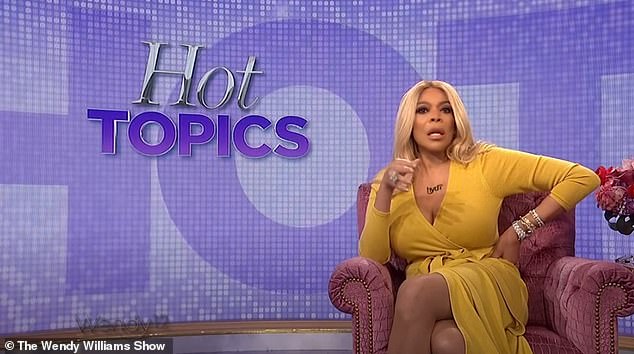 On Tuesday the host wore a bright yellow dress as she sipped her coffee and made the shocking comments on the program.

‘Welcome to Hot Topics, Sharina Hudson!’ said Williams. ‘Getting out of my car … with my money.’

YES she did: Wendy Williams named her former husband Kevin Hunter’s baby mama for the first time on her popular daytime show

Then she mentioned the baby Kevin had with massage therapist Sharnia: ‘She’ll be almost three – I think she’ll be three next month, don’t you know.’

Next she said hello to her ex. ‘Good morning, Kelvin,’ she said. Kelvin is Kevin’s legal name. ‘It’s my truth.’

Also this week she called Hunter a ‘serial cheat.’

The 56-year-old talk show host filed for divorce from Kevin Hunter in April 2019 after he fathered a child with another woman but she admitted his infidelity didn’t come as a shock because he had slept with other people throughout their 21-year marriage. 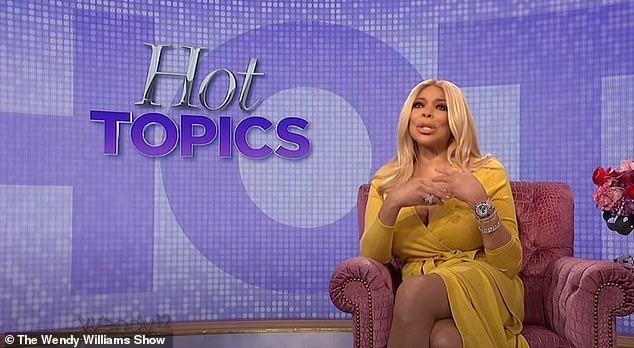 Chic while dishing: On Tuesday the host wore a bright yellow dress as she sipped her coffee and made her shocking comments

She added, ‘I’ve known about her almost since the beginning. I’ve known that Kevin is a serial cheat.’

Wendy first found out the 48-year-old producer had been unfaithful while she was pregnant with their son Kevin Jr., now 20. 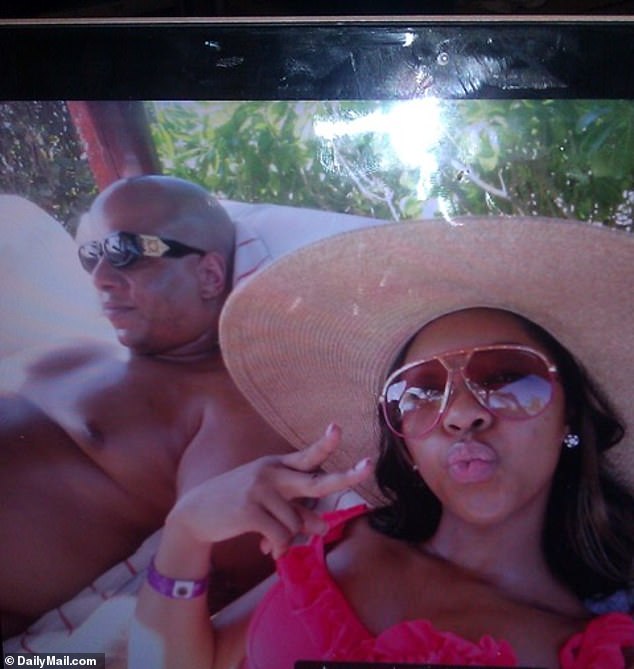 Directed at her: ‘Welcome to Hot Topics, Sharina Hudson!’ said Williams. ‘Getting out of my car … with my money’ 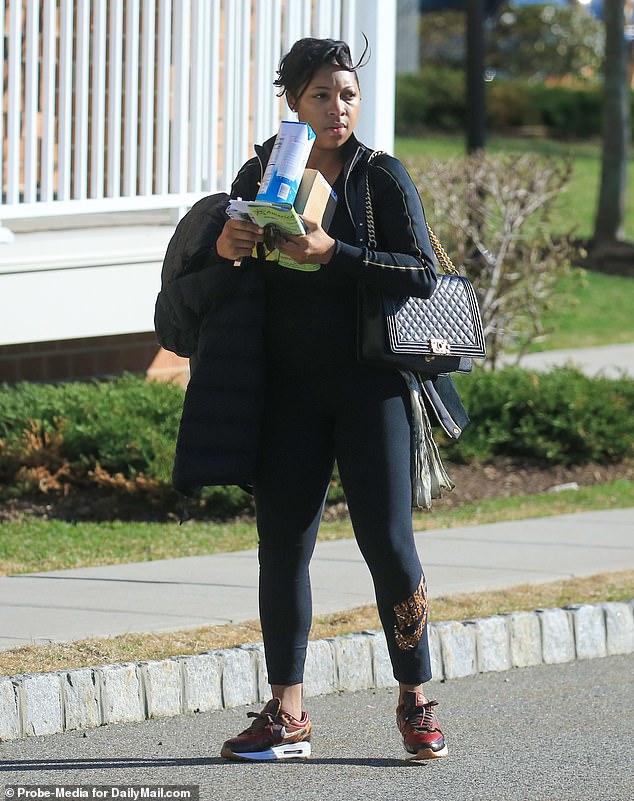 She continued: ‘The first time I found out was while I was pregnant with our son [Kevin Hunter Jr.] on bedrest. During that time I gave birth to him, he was in the delivery room. … He’s passing out cigars and [saying], you know, “My wife and I and little Kev.”‘

Wendy ‘plotted to divorce’ Kevin and is happy with how things have worked out for her.

She said: ‘I sacrificed a lot of myself to come out successful on the other side, and it all worked.’

The Ask Wendy writer previously admitted Kevin’s ‘major indiscretion’ in fathering another child was the final straw for her. 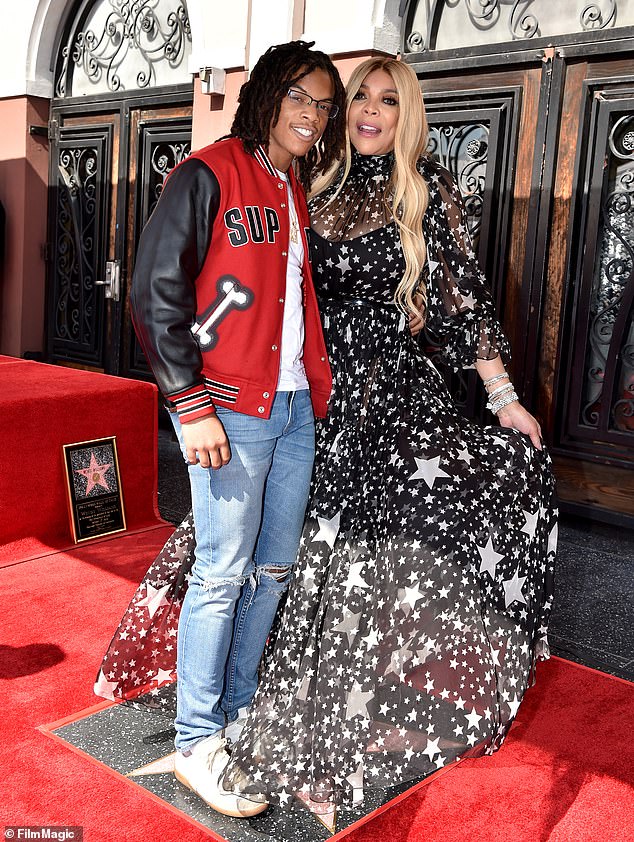 A good mom: Wendy and son Kevin Hunter Jr. attend the ceremony honoring Williams with Star on the Hollywood Walk of Fame in 2019

‘I never thought that I would be in this position. I’m a very forgiving person, but there’s one thing that I could never be a part of, and that one thing happened.’

This comes after Williams said she wants her next boyfriend to be out of the spotlight.

The host is keen that her future partner isn’t famous like herself or even in the showbiz industry but insists he must have ‘a sense of humour for the business’. 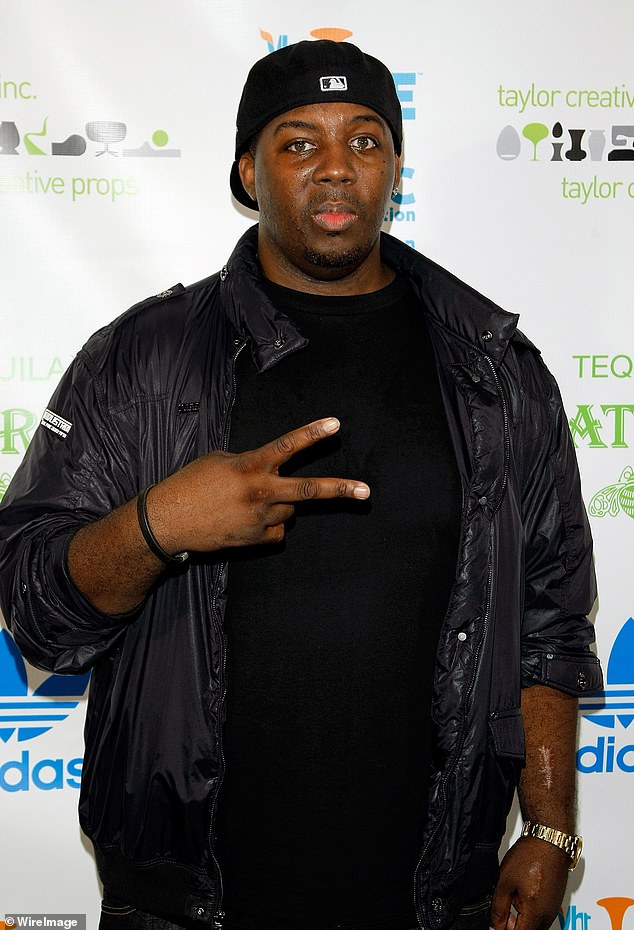 She used to hang with him: A shot of Eric Sermon, an old pal of Wendy’s

She shared: ‘I’m 56 now. I’m a mom, I’m not a single woman running around town with [rappers and DJs] like Eric B anymore. Those days are over.

‘My next boyfriend, hopefully husband he’ll turn into, I don’t want him to be in this business. He’s got to appreciate my humour and have a sense of humour for the business that I’m in, and not try to stop me. But he’s also got to be very, very comfortable in the man that he is. And he’s got to be 45 years or older.’

And Wendy – who finalized her divorce from Kevin last year after 22 years of marriage – is excited to have more say on her career and her future goals.

And discussing her future career moves, she added to Entertainment Tonight: ‘Now that I am my own boss, as opposed to having Kevin bossing me around and telling me what to do and me playing the role, I am in on everything. Now I would like to produce more stuff. And that stuff would be for other people to star in, not me – I’m not an actress.

‘I liked being part of the process of writing, and also I would like to sit in that director’s chair one day. Just to be an associate director or something.’