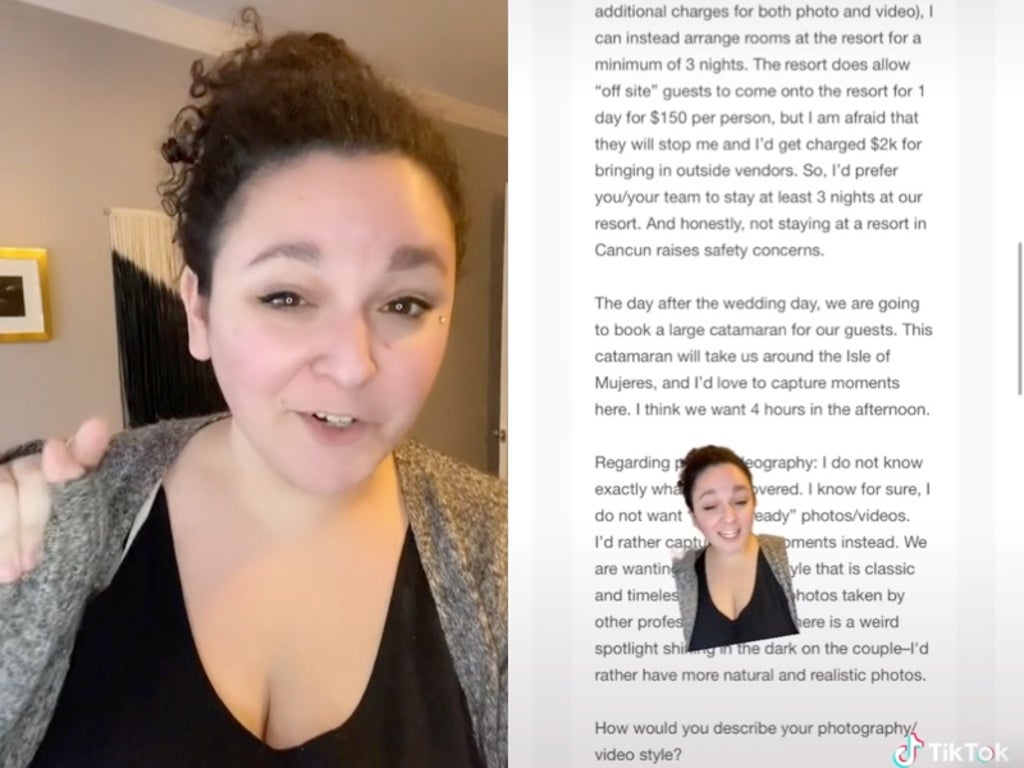 A wedding photographer has called out a bride who asked if she would provide free photography for her destination wedding in exchange for “travel and lodging” during the Mexico nuptials.

AJ Abelman, a photographer from Chicago, Illinois, who goes by the username @ajdoesweddings on TikTok, shared the email she received from the bride in a video posted to the app last month.

In the clip, which she captioned: “Things that make me go AGHHH!!” Abelman began by telling viewers that she just received a message about a destination wedding “that makes my blood boil”.

The photographer, who also acknowledged that she travels all over the country shooting weddings, then shared a screenshot of the email that she received from the bride, who was looking for a photographer and videographer to shoot her three-day destination wedding in Cancun.

In the email, the bride said that she was looking for someone who was willing to “exchange services of photography/videography for flight/resort/transportation”.

“To photograph and film the wedding, in exchange for travel and lodging at the resort,” the email continued, with the bride explaining that “ideally,” she would like to cover just the hotel, which includes all-inclusive drinks and food, in exchange for the photography services.

The bride then said that “it would also be ideal” if the videographer was a “partner or spouse,” so that they could share one room with the photographer.

“Using a rollaway bed is an option if sharing a bed is not an option,” the bride continued, before suggesting that, “depending on the flights,” travel costs could also be something that is “taken into consideration”.

According to the bride, if there is a “need” for the photographer and her team to stay more than three nights, it would not be something that she would cover, as “most of our guests are only staying three nights” and that is all the hotel block is covering.

Abelman then shared another screenshot from the bride’s lengthy email, in which she went on to explain that she also wants coverage for a catamaran ride on the day after the wedding, and that she was hoping to bring in outside photography vendors and have them stay at the hotel so that she could avoid paying a $1,000 vendor fee charged by the hotel for outside vendors.

“So I’d prefer you and your team stay at least three nights at our resort,” the email continued, adding: “And honestly, not staying at a resort in Cancun raises safety concerns.”

As Abelman shared the screenshot of the email, she asked: “Do we see the problem?” before showing a portion of the email in which the bride broke down what it would cost her to host the photographer.

In the video, Abelman then went on to “unpack” the email, with the photographer beginning by pointing out that, while the bride and the wedding party and guests would be on vacation, she would not be.

“Because it’s an all-inclusive, in her mind, that’s an equal exchange for me coming and shooting her wedding.”

Abelman then pointed out the inappropriateness of the bride’s request that she and her videographer share a room, stating: “Ew, no?”

In the video, Abelman proceeded to explain how it usually works when photographers are hired to fly in for an event, with the photographer noting that typically the costs of their travel and stay are covered, and that they are then also paid for the cost of their services.

Abelman acknowledged that her costs start at $6,000, which she noted is not anywhere near the $1,000 the bride would be spending on her travel and stay at the resort.

The photographer concluded the video explaining that “non-creatives” are never asked to exchange their services “like this”.

“You would never ask your plumber if, in exchange for fixing the pipes, you could take them to the movies,” Abelman said. “Things cost money. So why are my services, preserving memories for the rest of your life, equal to one day of vacation with strangers?”

Abelman also pointed out that, if she is asked to work two out of the three days, that is not a vacation, it is a “work trip”.

“And when you ask someone to come and do their job, you pay them for those services,” she continued, adding that: “If you can’t pay for your destination wedding, don’t have one, don’t do this.”

The video has since been viewed more than 501,000 times, with viewers horrified by the bride’s request and “audacity”.

“That’s an offer you give to a cousin or something, not a professional vendor,” one person commented, while another said: “The audacity of people always astonishes me…”

Someone else noted that their mind was blown by “the way she sounded so confident in her email, and like she was doing YOU a favour…”

In a follow-up video, Abelman said that she ultimately decided to respond to the bride’s email with a message of her own, in which she explained the multiple issues with the request.

Abelman then proceeded to read the email she sent to the bride, in which she noted that she decided to respond because she thought it would be a “good teaching moment”.

“Your request was at best uninformed and, at worst, disrespectful of my time, skill and profession,” the photographer wrote in her email. “I wanted to act on the small chance that you may not know what you are asking for is wildly inappropriate.”

In the email, Abelman then went on to explain to the bride why her offer actually constituted the “bare minimum” that she and most wedding photographers who travel would require “in addition to payment for the actual services performed”.

“Just like offering to pay me in ‘exposure,’ vacation with you and your friends and family does not pay my bills,” she continued, adding that she would “love” to be able to pay her bills in room service and a ride on a catamaran but that “is not a reality”.

Abelman also shared her concerns with the woman’s attempts to avoid hiring local photographers, and the questions she posed about the photographer’s style and services, with the photographer noting that it’s “very clear from those questions alone that you didn’t bother to even look at my website before reaching out”.

According to Abelman, she also reached out to a few friends in the industry, who revealed that they had also been contacted by the bride in question with the same offer.

“The industry is smaller than you think … is it possible that you were casting such a wide net because you know that what you are asking for is inappropriate and you figure it’s a numbers game?” Abelman said.

In the email, Abelman also shared a breakdown of the costs the bride was asking for for free, and noted that the bride’s suggestion regarding lodging is “insulting,” as she noted: “When was the last time you were asked to share a bed or bedroom with your boss on a business trip?”

In another follow-up TikTok, Abelman continued reading the email she sent in response to the “insane” email she got from the bride, in which she broke down all of her costs, and what she needs to cover with the money she is paid from each job.

Abelman concluded the email reiterating to the bride that her email, and her request that creatives exchange their services for free, was “offensive”

“I wish you nothing but the best, and perhaps a little humility, as you wedding plan,” she added, before informing the bride that she will get “exactly what you pay for her” if she does find a photographer willing to stay at the hotel for free in exchange for their services.

In response to Abelman’s email, many viewers applauded her for standing up for herself and other creatives.

“This is exactly what these people need to know. Excellent!” one person commented, while another said: “I am screaming! I adore you.”

According to The Knot’s 2021 wedding survey of more than 15,000 couples, the average cost of wedding photography is $2,500, while “photography was also the most common area where couples were willing to spend more”. 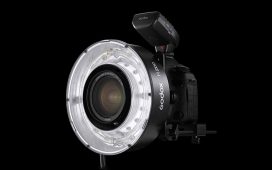 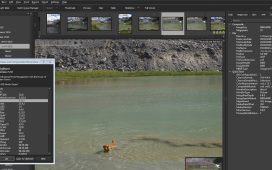 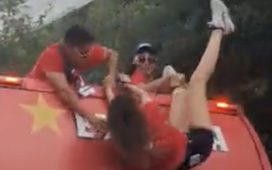 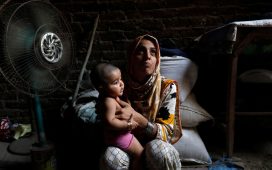 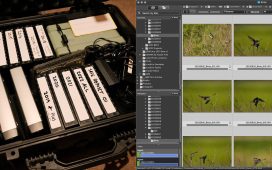 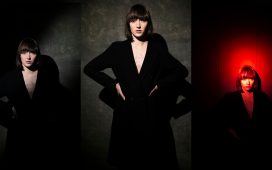 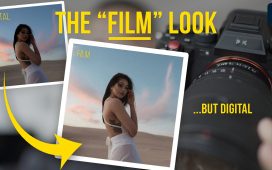