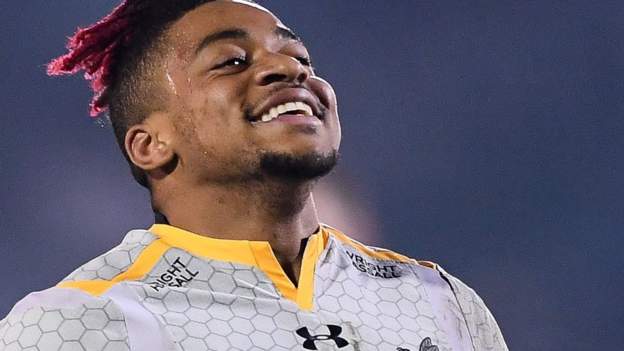 In a game of 11 tries and almost 100 points, Bath led 29-24 at half-time after home tries for Rhys Priestland, Sam Underhill, and Cameron Redpath.

Having got off the mark with a penalty try, Tom Cruse and Brad Shields crossed for Wasps and four more were to follow.

But Ben Spencer failed with the added-time conversion attempt that would have got the hosts a second losing bonus point.

The one blow for Wasps was an injury to Wales lock Will Rowlands, who went off in the 37th minute before then failing a head injury assessment.

But the big consolation was that Shields came on to claim an immediate score that crucially reduced the interval gap on his first appearance following a seven-week injury absence.

Rowlands’ fellow Welshman Priestland kicked two conversions and five penalties for the hosts, to add to his opening try of the night for a 22-point individual haul.

That was supplemented by a late penalty from Spencer after the exiled Wales stand-off had to go off on 56 minutes.

But Lima Sopoaga also landed seven kicks – six conversions and a penalty – for a 17-point tally of his own.

After a slightly off-colour start to the new season, Wasps have now won five games on the spin, having triumphed in their two European Champions Cup games against Dragons and Montpellier prior to the successive Premiership wins over three of last season’s top five – Sale, under-strength Premiership leaders Exeter and now Bath too.

“We’re gutted to lose and gutted to concede that many points. There is an emotional part about playing here at The Rec and 50 points at home is always going to really sting.

“It does hurt and it will hurt for a while. That’s part of sort. It’s understanding how important home games. If it doesn’t hurt, then that’s not right.

“We had good phases and scored points but we made too many mistakes and gave them ways back into the game.

“”Rhys Priestland controlled the game before he went off and put pressure on Wasps. Hopefully he’ll be all right. We’ll have a look at him.”

“It was a sloppy start and we gave them too many kickable opportunities, but I’m pleased with the way the guys they clawed it back.

“There were two teams out there who looked quite tired. Bath were coming off just a five-day turnaround and we’d only had six days on from a massive physical encounter with Exeter.

“Sometimes you see scorelines like that this on the back of that. But I really thought it would be a classic January evening 10-8 sort of game, so to score that many points at The Rec has got to be pleasing.

“To go and win three straight games against Sale, Exeter and Bath, you’ve got to be happy and we can get even better too.”