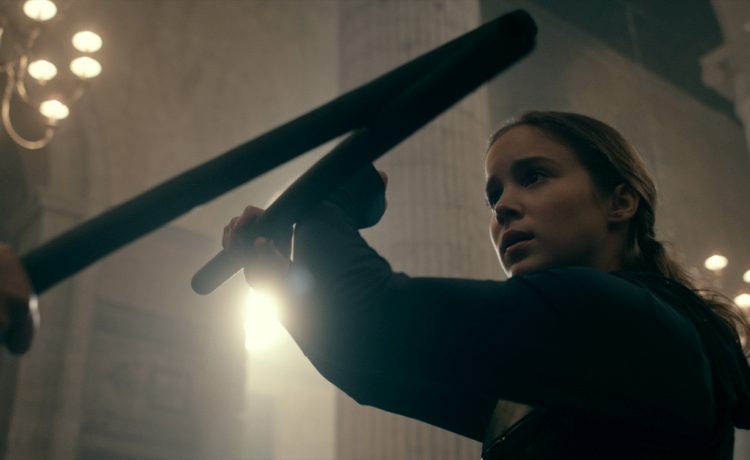 Adriel pretends to be an angel, and uses the halo to revive Areala (Guiomar Alonso), and convince the Knights Templar to fight for him against “the devils.” He forges his armor, shield, and the Cruciform sword from the melted-down remains of a Tarask —the source of Divinium. Areala knows he’s neither man nor angel, but doesn’t immediately expose him for fear of having the halo, and her life, taken away. Ava, like Areala, sees through Adriel’s bullshit, so he drops the pretense and tries to rip the halo out of Ava’s body.

Previously, scientist Jillian Salvius (Thekla Reuten) saved her son, Michael (Lope Haydn Evans), by infusing his blood with Divinium she harvested from Adriel’s armor. Unbeknownst to her, this created a connection between Michael and the armor’s original owner, which allowed Adriel to manipulate her by way of her son. She builds a portal to take Michael to a world where “death doesn’t exist,” or so she believes. When Adriel tries to yank the halo from Ava’s body, the portal opens, and Michael travels through it alone. The portal closes when Ava manages to push Adriel away, suggesting the halo is a key.

Throughout the season, Mary investigates the death of the previous Warrior Nun, Sister Shannon, and when it becomes clear Shannon was targeted, the evidence points to Cardinal Duretti (Joaquim de Almeda). Duretti’s guilt seems apparent, as he attempts to seize control over the halo, and undermine Father Vincent, including bringing his own coven into the OCS to replace Mary, Beatrice, Camila, and Lilith. When Ava and the team are infiltrating the Vatican, Mother Superion (Sylvia De Fanti) confronts now-Pope Duretti about the bones, and Shannon’s murder. But he has no idea what she’s talking about. Turns out, Father Vincent pulled the long con. He convinced everyone that Duretti killed Shannon to gain power, which Duretti played into by reigning in the OCS and ascending to the papacy, all the while he was responsible. He manipulated the OCS to free Adriel and return the halo to him.

The sisters have to quickly get over the fact that they’ve been played and go fisticuffs with Adriel. Lilith —who came back from… somewhere, with powers of her own— briefly overpowers him, but he survives a point-blank arrow to the head. When Ava shows up with the halo recharged, ready to fight with the Cruciform sword, Adriel summons non-corporeal Wraith demons to possess nearby civilians. The women all prepare to fight. Mary, true to her name, goes in guns blazing. And in the most disrespectful cliffhanger I’ve seen in a long time, the screen fades to black as Mary is overrun by the possessed. We don’t see what happens to her, or the others.

What we know is this. Adriel is not an angel. He stole the halo and escaped to this world, and the Tarask want it back. He lied to the Knights Templar about being an angel, so they would fight the Tarask for him, and the Order of the Cruciform Sword was built around that lie. Adriel has kept up with the outside world through his connection to his Divinium artifacts, and used his connection to Michael Salvius to influence Jillian to build him an interdimensional portal, for which the halo is likely a key. What we don’t know is what the portal is for and who the halo belongs to.