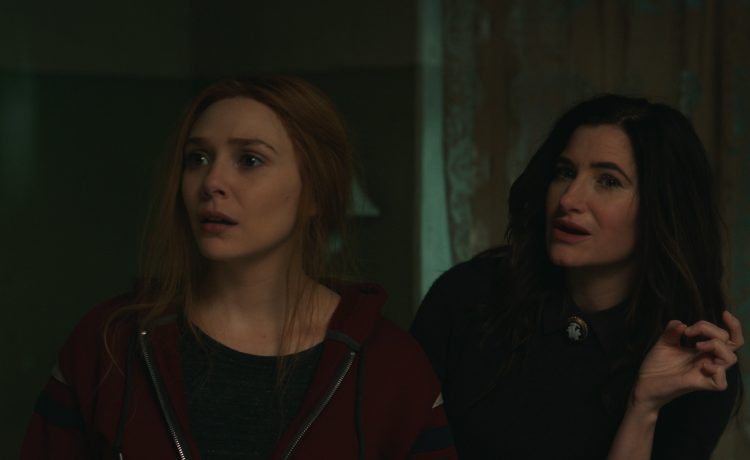 Well, there go our theories that poor Wanda has just been puppeting her dead boyfriend’s corpse around Westview (thankfully – that idea was always dark af). Instead, it appears that this is more of a Vision 2.0, a being created by a combination of an incredibly powerful dose of Wanda’s chaos magic, her memories of the man she loved, and the overwhelming grief she can’t seem to control.
But does that mean Vision is actually alive? Like, could appear in another MCU film, alive?  And if so, why can’t he leave the boundaries of the Hex? Does he even have a physical body, or is his form just a Wanda-powered projection?

What is Tyler Hayward’s Endgame – and Why Is He Trying to Blame Wanda for it?

One of the biggest revelations in “Previously On” was that Wanda did not, in fact, storm into SWORD headquarters and steal back her boyfriend’s dead body. Instead, she actually experienced a quietly shattering moment of grief in which she accepted that the Vision she loved was truly gone. So…why did SWORD director Tyler Hayward not only insist that she did, he literally put together a deep fake video to prove it?

Hayward has been a fairly shady figure since he first appeared on WandaVision, but this is some next-level mustache-twirling stuff. Has he just been trying to turn Vision’s body into a weapon – seemingly mission accomplished there – or has he been crafting a much larger and more nefarious scheme?

After all, he is on record as hating the superpowered beings that he believes are responsible for both the Snap that erased half the population and the Blip that brought everyone back but ultimately devastated those left behind in the meantime. Is the White Vision his revenge on Wanda – and those like her – in some way? (Truly, so many problems could be solved in the universe of the MCU if people just got some help for their PTSD, but that’s a rant for another day.) Or is Hayward’s scheme more complicated in some way?

What is the Purpose of the White Vision?

The Dr. Manhattan-esque White Vision revealed in this week’s credits scene is both creepy and heartbreaking at the same time. The real Vision, after all, had specifically requested that he not be brought back or used as some kind of weapon after his death. And now he’s been made into what is likely some sort of soulless killing machine, using his soulmate’s magic and against his own wishes. How Hayward figured out how to reanimate Vision, what vibranium he was tracking in the Hex, and what he intends to do with this new weapon he’s made are all outstanding questions. But none of them likely have happy answers.