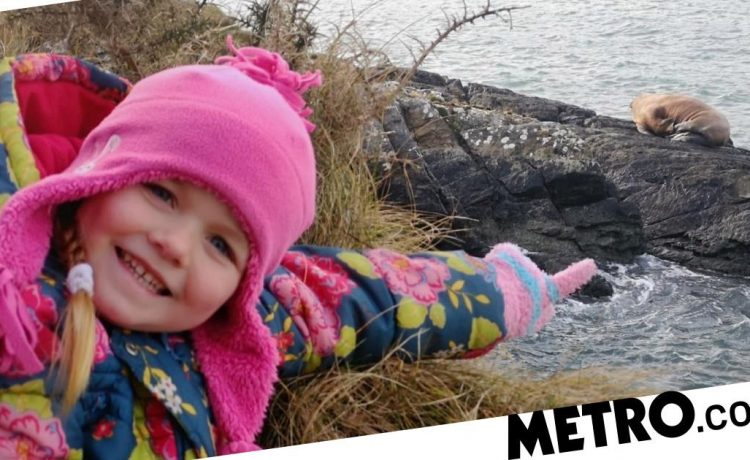 A five-year-old girl and her father were left ‘mind blown’ when she spotted a huge walrus that is believed to have dosed its way to Ireland from the Arctic.

Alan Houlihan and his young daughter Muireann were walking along the coast of Valentia Island, County Kerry, when she spotted the extremely rare giant mammal. The youngster was very taken with her new friend and has been drawing pictures of it and coming up with possible names.

Mr Houlihan said a marine biologist told him the walrus may have fallen asleep on an iceberg and drifted down to the Irish coast before the pair made only the third sighting of its kind in more than 20 years.

Muireann’s dad explained: ‘The size of the thing was astronomical. It was the size of a big bull.

‘He disappeared into the sea for a while and he then came back and put himself on a rock for a good couple of hours. It was fantastic.’

Muireann has arrived at two would-be names for the walrus after her remarkable find: Isabelle for a girl, and Cian for a boy.

Mr Houlihan added: ‘She went home last night and she was drawing pictures of walruses. It was so adorable.

‘We are in lockdown so the kids have gone back to school today for the first time, so it made things a bit easier for them to go back in today with a news story.’

The Irish Whale and Dolphin group (IWDG) estimates the walrus to be a young adult but it is not possible to determine the gender as both males and females have tusks.

The organisation wrote on social media that this was only the third validated sighting of a walrus in Ireland since 1999.

It said: ‘The National Biodiversity Data Centre has 11 walrus records but the Natural History Museum suggest this number may be as high as 20 going back over several centuries. Either way, walrus sightings here are extremely rare.

‘In mid-February, a walrus was photographed off the Danish coast and comparisons of images leave open the possibility that they may be the same individual.

‘We would ask members of the public fortunate enough to see it to observe this wayward traveller from a safe distance and to give it the space it requires.’