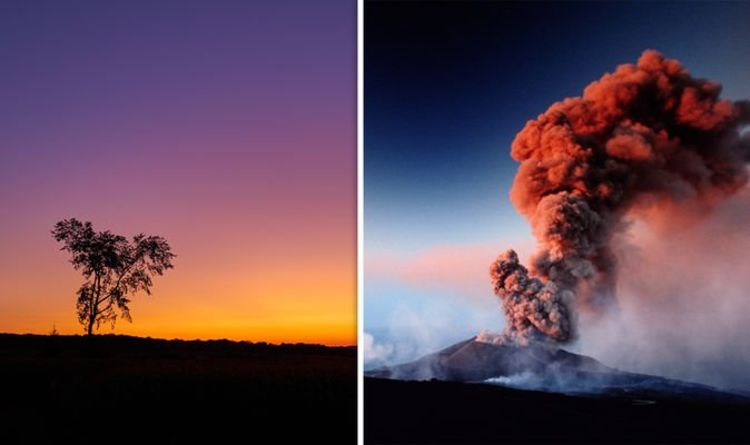 Two major eruptions this summer have caused a stunning atmospheric reaction which have left the sunsets looking purple in certain quarters of the globe. The first of two eruptions came on July 22 when the Raikoke volcano, located in the Kuril Islands in Russia’s Sakhalin Oblast region, erupted. The volcano, which had remained dormant for more than a century before the latest explosion, blasted a mass of ash and volcanic debris ten miles into the sky, reaching a layer of the atmosphere known as the stratosphere.

Sulfuric gas from both of these eruptions reached the stratosphere, which is why skies in some parts of the world turned oddly purple as the Sun started to set.

This is because fine volcanic aerosols in the stratosphere cause blue light particles to scatter.

When the scattered blue particles combine with the normal red hue of a sunset, it makes an eerie purple glow.

Website Space Weather added: “The purple colour is often preceded by a yellow arch hugging the horizon. Violet beams emerge from the yellow, overlapping to fill the western sky with a soft purple glow.

“High-quality pictures of the phenomenon often show horizontal bands cross-crossing the yellow arch. These bands are the volcanic gas.”

The off skies were most prominent across North America, with Greg Ainsworth, a photographer from Montana, US, telling Space Weather: “On Aug 26th I believe I captured the purplish sunset colours, as well as horizontal banding in the yellow/orange area associated with the volcanic aerosols in the stratosphere.”

On the other side of the continent, in Quebec, Canada, amateur photographer Gabriel Cyr also got a glimpse.

The Williams Flats wildfires have now spread across 44,000 acres across Washington State, but they have offered NASA a unique perspective. This is because fire clouds began to form over North America.

Fire clouds – properly known in scientific quarters as pyrocumulonimbus (pyroCb) or sometimes cumulonimbus flammagenitus – form when fires on the ground lift enough heat into the atmosphere.

The heat then take the form of smoke-filled thunderclouds which sit on top of the fire’s plumes on the ground.

Despite looking beautiful as they create an orange haze atop of normal clouds which is created when smoke reflects the Sun’s light, they can be harmful.

Thunderstorms can create more wildfires, triggering a vicious cycle, while NASA said fire clouds can also act as a chimney, funnelling smoke into the lower atmosphere.

David Peterson, lead forecaster for FIREX-AQ, was in the cockpit of NASA’s DC-8 – otherwise known as its flying laboratory – when it flew through the clouds, said: “PyroCb are like large chimneys, transporting a large quantity of smoke into the lower stratosphere.”